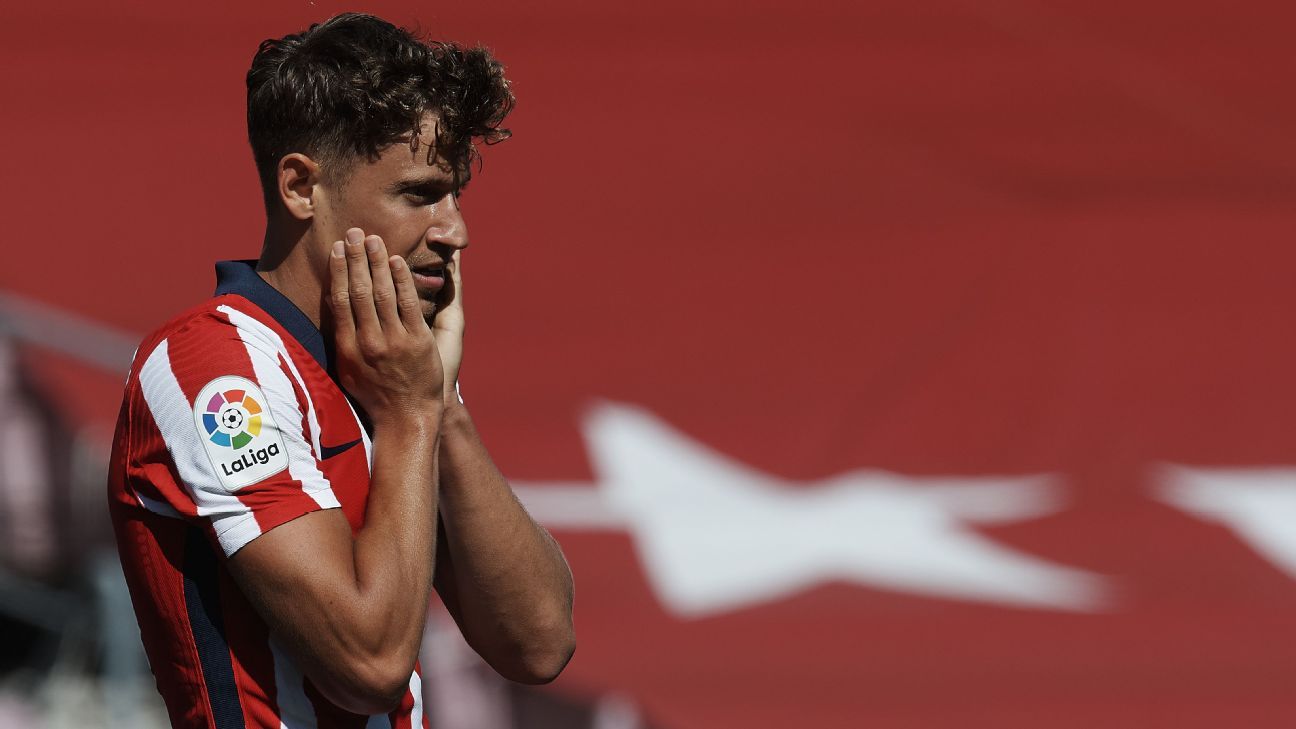 Just after midnight on Tuesday night, Barcelona‘s players silently boarded a bus waiting outside the Ciutat de Valencia, knowing it was over, another opportunity wasted. Just before midnight on Wednesday night, fireworks exploded in the sky outside the Metropolitano, Atletico Madrid fans who had followed the game from the carpark alongside the stadium hoping it was almost over. And just after midnight on Thursday, Real Madrid‘s players began the four-hour journey home, having ensured that it wasn’t over yet, determined to drag this out to the very last day.

And so here we are. One down, two to go.

Mathematically, Barcelona can still win La Liga, but they won’t now. Sergio Busquets was still talking when the men came and took away the televisions positioned at the front of the stands in the stadium, carrying him off, no longer part of this show. Barcelona had blown it again, drawing 3-3 with Levante having been 2-0 and 3-2 up. On the touchline, the only man left, Busquets looked broken. He had been asked what chance Barcelona had still of winning the league. “Not much,” he replied.

By the following night, there was even less chance. If Barcelona had clung to the hope of the other contenders conceding ground, it didn’t happen. Atletico had been made to suffer, the final minutes unbearably tense, but then if they didn’t suffer they wouldn’t be Atletico, the captain Koke said. And in the end, they did find a way through, defeating fifth-placed Real Sociedad 2-1. Another obstacle overcome, and probably the hardest left. Just two more remained, and they felt close now, Luis Suarez recording a video declaring this “one more step.”

Atletico’s lead at the top, held for five months, had been steadily reduced since the end of January but never relinquished. Barcelona could have taken it from them against Granada and lost. Madrid could have taken it from them against Sevilla FC and drew. Meanwhile, Atletico appeared to have recovered a little; just as importantly, they had resisted. They had been to the Camp Nou and got past Real Sociedad. And so here they were, still top, with two games to play. Barcelona were four points behind. Madrid were five behind, with a game in hand.

Atletico had to win two more games. Madrid had to win three, and hope that Atletico slipped up. Besides, Atletico had just emerged from a scare, holding onto a 2-1 lead for the final 11 minutes, and they say what doesn’t kill you makes you stronger. There was a certain catharsis in the final whistle. Diego Simeone, who had been pleading with his players to just boot the bloody thing as far away as they could, was now sprinting up the stairs shouting. On the pitch, players celebrated, embracing each other. They had been through it, and they were on the other side now.

It was natural that it felt close.

Koke defined it best. At the end of the match, he insisted: “It might not look like it but there’s a world to go.”

The following night Real Madrid went to Granada, the team that had beaten Barcelona, with a young side. They came from defeat against Chelsea and that draw with Sevilla, their opportunity denied — although it may yet turn out that Eden Hazard‘s goal in the 94th minute proves to be huge. They were on edge, knowing that any dropped points would be the end. Or maybe they were released by that? They won 4-1.

“We’ll fight to the last minute of the last game,” Zidane said. Madrid were back to two points behind Atletico, the line in sight.

Atletico have a two-point lead, but it may as well be a lead on goal difference. They may as well be level. Madrid have to win both games. But so, in all probability, do Atletico. Because Madrid have the head-to-head advantage, if the teams finish level, Madrid would be champions. In other words, should they win both it would be enough to take the title so long as Atletico draw one of their two remaining fixtures. “Atletico are strong but we’re going to keep going and hope they don’t win,” Thibaut Courtois said.

On the face of it, Madrid’s fixtures are harder, but it doesn’t always work that way — and this season least of all. They face Villarreal three days before the Europa League final, so Unai Emery’s men are not exactly going to be treating that as a priority. Most of his normal team won’t even be on the pitch, in fact. Meanwhile, Valladolid may well be fighting for their lives on that final day against Atletico.

But that analysis is only trained on the final day, not on the penultimate game when Simeone rightly insists on going one game at a time. More importantly, it is also no more than simple logical — and if this season has done anything it is defy logic.

Dan Thomas is joined by Craig Burley, Shaka Hislop and others to bring you the latest highlights and debate the biggest storylines. Stream on ESPN+ (U.S. only).

There’s a world to go, Koke said, and he’s right.

Just two matches. Or maybe not even that: on Sunday Atletico could even be champions. Sure, but the lessons of this season says they won’t be, that this will go to the very, very end, nerves shredded. All Atletico have to do is win them both, people say. All?! They’ve only won two in a row once since Feb. 1. Madrid meanwhile are unbeaten since January but have won just half of their past six. Anything can happen, and is happening.

Football matches are life in 90 minutes, time for so much to happen; this season’s matches are more than one. Just the final eight minutes at the Metropolitano on Tuesday night felt like a lifetime for everyone, almost too much to take. And that was on a night when, in truth, not much actually happened, it just felt like it was going to. There is no easy, not anymore. There is too much emotion for that, too much effort invested, too much fear accumulated, the margins too fine, so fine it’s almost sadistic, too much to win and definitely too much to lose.

“The tiredness is there, the anxiety is there,” Simeone admitted, speaking for everyone. The league title is there too, close now but still just out of reach.