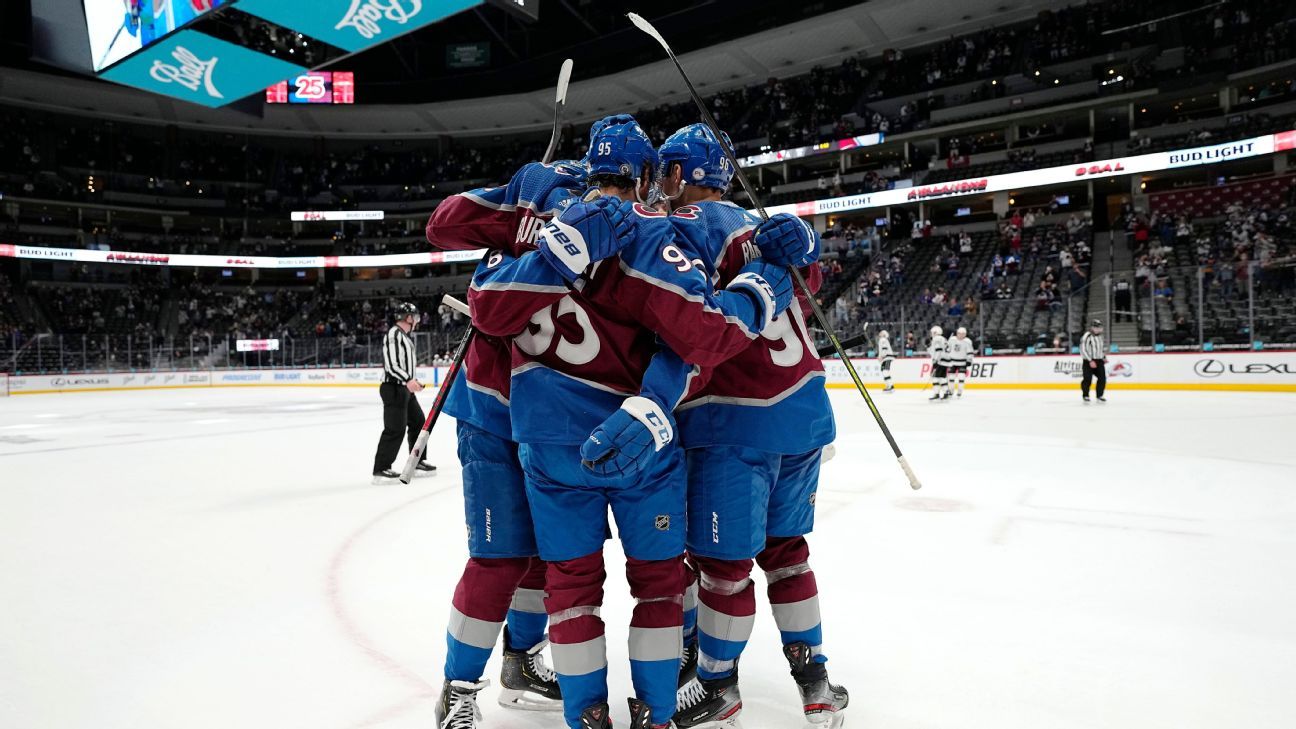 DENVER — Tyson Jost scored two of Colorado’s five second-period goals as the Avalanche clinched the West Division and the top overall seed in the NHL playoffs with a 5-1 win over the Los Angeles Kings on Thursday night.

Pierre-Edouard Bellemare, Joonas Donskoi and Andre Burakovsky also scored in the pivotal period. Backup Jonas Johansson made 21 saves to help the Avalanche finish 7-1 against the Kings this season.

Colorado and Vegas both finished with 82 points, but the Avs earned the division crown and the Presidents’ Trophy — awarded to the team with the best regular-season mark — due to more regulation wins. This was the first time the Avalanche have captured the Presidents’ Trophy since 2000-01, when they went on to hoist the Stanley Cup.

Colorado begins a first-round series Monday against St. Louis, which wound up with the fourth seed in the West.

Sean Walker scored for the Kings as they wrapped up their season on an 0-4-1 skid. Troy Grosenick stopped 38 shots.

The home-ice advantage could come in handy: The Avalanche have been playing at a high level at home, going 16-0-1 in their past 17 at Ball Arena. The 17 straight home games with at least a point ties the club record set in 2003.

Down 1-0 heading into the second, Colorado quickly found its rhythm. Jost led the way by scoring twice within a 1:52 span to give the Avalanche a lead they wouldn’t relinquish.

The action got a little heated late in the second when Kings forward Brendan Lemieux collided with Avs defenseman Samuel Girard near mid-ice. Girard’s fellow defenseman, Ryan Graves, took exception and immediately dropped the gloves to square off against Lemieux.

Johansson stepped in for starter Philipp Grubauer, who shut out the Kings in a 6-0 win Wednesday. Avalanche coach Jared Bednar hasn’t played Grubauer in back-to-back games all season and didn’t want to start now, despite the importance.

Johansson rewarded his faith by improving to 5-1-1 with Colorado since being acquired in a deal with Buffalo on March 20.

Mikko Rantanen assisted on both of Jost’s scores to give him 66 points (30 goals, 36 assists). It’s the most on the team this season.

The Kings struck late in the first period when Walker capitalized on Burakovsky tumbling to the ice trying to keep the puck in the offensive end. Walker had a clear path to the goal and threaded a shot under Johansson’s glove for his fifth goal of the season.

Avalanche forward MacKinnon sat out Thursday for the fourth time in five games due to a lower-body injury. The team went 4-0 in the games he missed.

“We have such a deep roster that we have guys who can fill spots,” captain Gabriel Landeskog said. “Obviously, we miss him.”

Colorado F Carl Soderberg was scratched for a second straight game. … Avs D Conor Timmins had two assists. … D Cale Makar had an assist to finish with 44 points in 44 games. He joined Steve Duchesne (82 points in 82 game with Quebec in ’92-93) as the only defensemen in franchise history to average a point-per-game (minimum 40 games). … Goaltender Devan Dubnyk remains on the league’s COVID-19 protocol list.