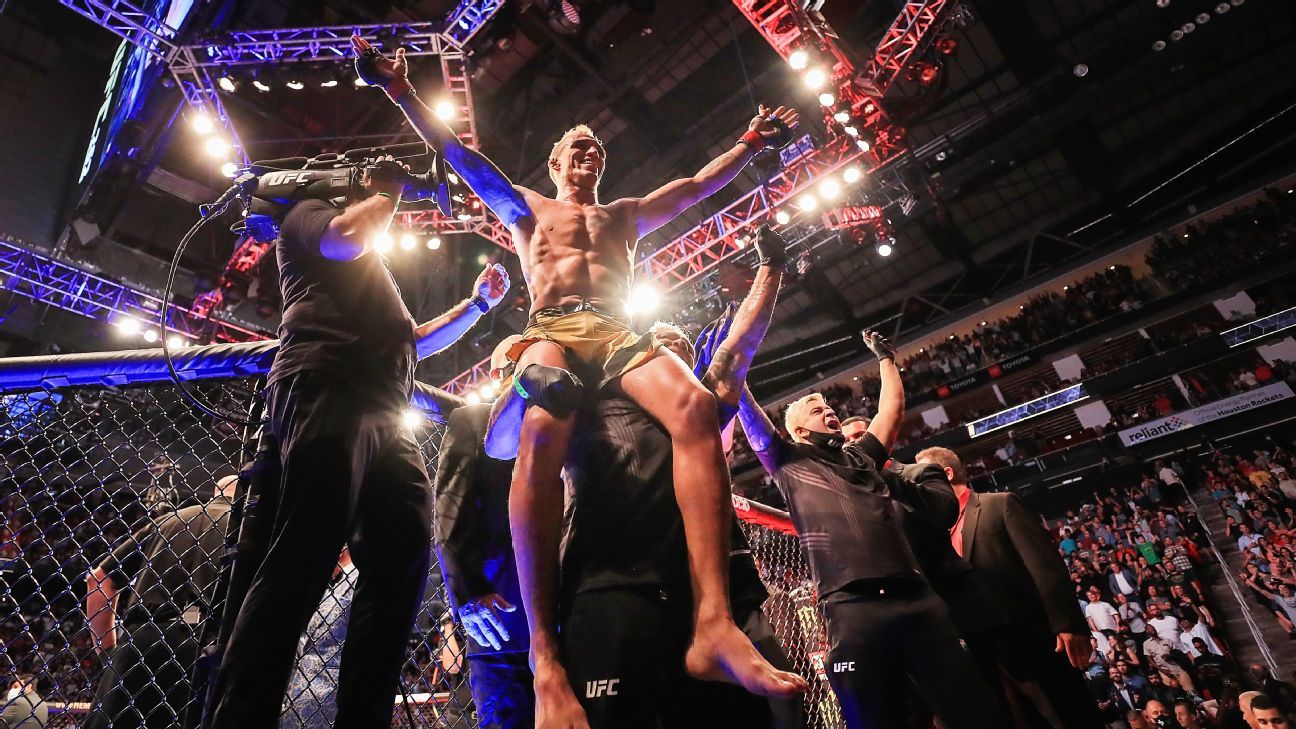 Charles Oliveira‘s last defeat came in December 2017, a loss to Paul Felder via second-round TKO. That was his fourth loss in a six-fight stretch. He had missed weight four times in the previous five years and started his UFC career a pedestrian 10-8, with one no contest.

I asked Felder on Saturday, prior to UFC 262, if he would have believed me if I told him back in 2017 that Oliveira would not lose another fight since that loss and eventually fight for a UFC title several years later.

Of course that was his answer, and if we’re all being honest, none of us would have thought differently.

Oliveira was always a good fighter — you don’t break the record for most submissions and finishes in UFC history without being skilled. But his weight-cutting issues and his momentary lapses of judgment always made us feel like he would remain a mid-tier lightweight or featherweight.

But everything changed after that loss to Felder, and it all came to a head on Saturday night.

What a moment. What a reminder to never give up — in all facets of life.

In a way, the UFC 262 main event was the perfect representation of Oliveira’s career: it started off somewhat rocky, then he enjoyed success mid-round, and then it looked like everything was going to come crashing down towards the end of the first round. The second round starts, all is forgotten, he drops Michael Chandler with a left hook, and that’s the beginning of the end to one of the greatest stories in UFC history.

A story that is still being written, of course.

So now Charles Oliveira, the still-skinny Brazilian who debuted in the UFC in 2010 as a 20-year-old MMA neophyte, is the new undisputed UFC lightweight champion. Very few people, if any, saw this coming.

The win was Oliveira’s ninth in a row. He now holds the record for most UFC fights (28) before winning UFC gold, breaking Michael Bisping‘s previous mark of 26, and Oliveira holds the record for most finishes in UFC history with 17. Oliveira’s debut was 3,941 days ago on a network, Versus, that no longer exists. Now, he’s the champion of the UFC’s deepest weight class.

I mean, what’s better than that?

The best part is that Oliveira is still only 31. You get the sense he hasn’t even come close to peaking and will be a force for some time (boy, would I love to see that Khabib Nurmagomedov fight, but I’m refusing to go there on this night).

After the fight, the always positive Chandler predicted he’d be back within 12 months. He would know what it takes to bounce back: the man has been here before. He’s stumbled several times throughout his career, and yet there he was literally seconds away Saturday night from realizing his dream of becoming a UFC champion. What a cruel game this can be.

I have no reason to believe Chandler can’t get back to another title fight within the year. Heck, who would have thought these two would have been fighting for undisputed gold this time last year. But he’ll have to win at least two in a row, in my opinion, to make that happen. Lightweight is just too stacked. There are no shortcuts at 155.

That’s the bad news for Chandler and the good news for the new champ. He’s now the king of the UFC’s glamour division. He just cemented his legacy by becoming the 11th undisputed lightweight champion in UFC history. And now he just set himself up for a fight against the winner of July’s Dustin Poirier vs. Conor McGregor trilogy fight.

That’s the kind of fight that changes your life and your family’s life. And if we’ve learned anything about Oliveira over the past 11 years, it’s that the man stays the course. He doesn’t get too up, nor too down. None of this — the good or the bad — seems to affect him all that much.

He stays true to his roots. He never gives up.

Who has won the most Wimbledon titles? Men’s and women’s champions ranking in Open Era and all time
Andie MacDowell Returns to Hallmark With The Way Home Role
Is Serena Williams playing at Wimbledon 2022? Schedule, next match for tennis great
Jussie Smollett Roasted Online for BET Awards Appearance
Trying: Apple TV+ Drops Heartwarming Trailer for Season 3