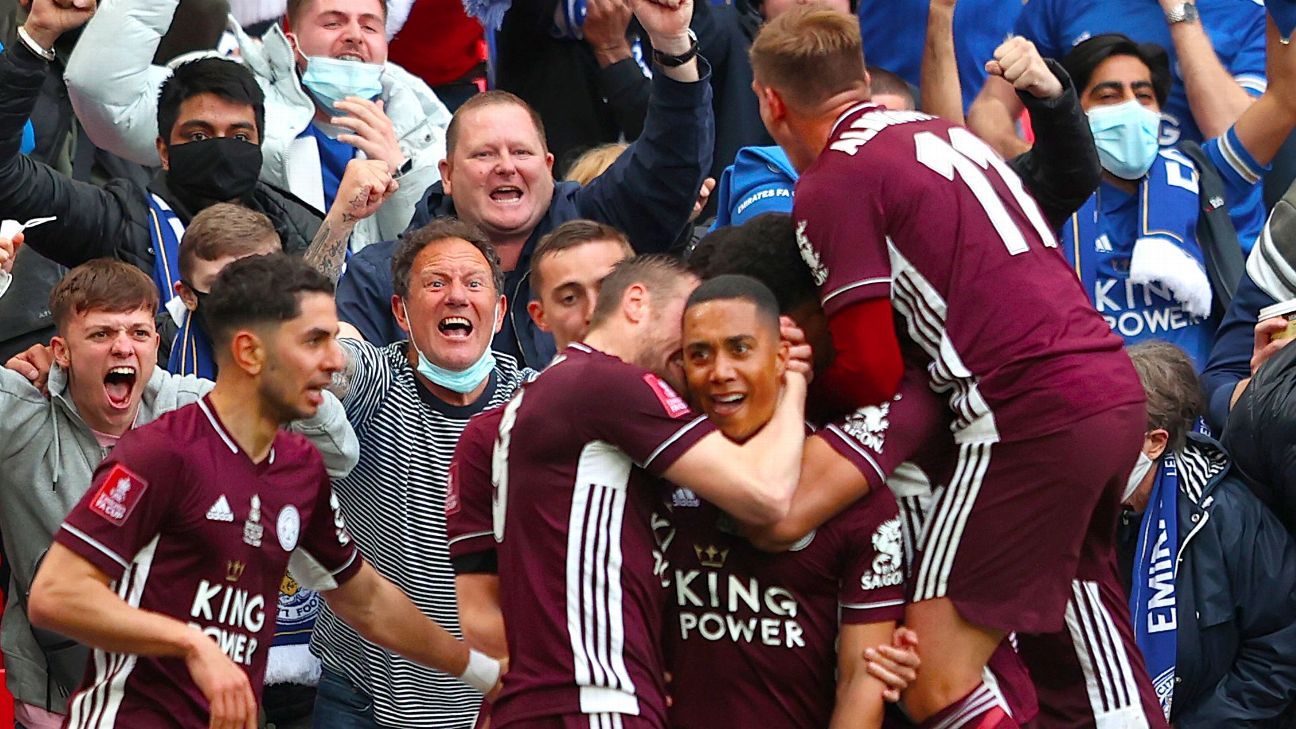 LONDON — Stretched above the majority of Leicester supporters, housed in a semi-circle behind the Wembley goal into which Youri Tielemans unleashed a majestic 25-yard strike to beat Chelsea 1-0 in the FA Cup final, was a banner bearing the image of the club’s deceased owner, Vichai Srivaddhanaprabha.

Thirteen words accompanied his picture, bearing a warm smile and hands clasped: “Our dreams can come true if we have the courage to pursue them.”

It is 20 months since Vichai tragically lost his life in a helicopter crash at the King Power Stadium, a disaster that strengthened the bonds at a club driven by purpose and poignancy under the guidance of his son Aiyawatt, known as Khun Top.

Amid the pandemonium that greeted the full-time whistle, Khun Top pointed to the sky while holding back tears. Goalkeeper Kasper Schmeichel later revealed that the Leicester players had a picture of Vichai on the inside of their shirts.

He remains close to their hearts, an owner whose generosity of spirit sits at the opposite end of the spectrum to which Chelsea and the other so-called “Big Six” clubs — as well as half-a-dozen others from Spain and Germany — chose to place themselves by signing up to the Super League project last month.

Unlike many of those clubs’ absent owners, the Srivaddhanaprabha family are engaged, present custodians who have fostered unity among all those connected to Leicester since buying the club in 2010. Khun Top, who had been unable to attend a game for more than a year due to the coronavirus pandemic, arrived last week. And now this.

Nothing will ever rival the 2015-16 Premier League title win, a feat given odds of 5,000-1 at the outset that not only became one of the most improbable successes in the history of sport, but will forever epitomise the essence of football: That the principle of fair competition means any given team can rise to the top. If, indeed, they have the courage to pursue their dreams.

But for Leicester, the team that writes fairytales like no other, this was not a bad sequel. After all, at its zenith, the FA Cup was the apotheosis of this aspiration: A straight knockout competition in which David could topple Goliath, resolve could defeat resource.

The competition has been marginalised over time by the growth of the Champions League, but this was a victory for the modern-day Premier League underdog and, significantly, precisely the kind of outcome the Super League sought to destroy. If defeating that breakaway was a victory for the fans, so then was this, another reminder that pre-eminence is the result of performance, not privilege.

Just being here was a win of sorts. Around 21,000 supporters filtered into Wembley for the biggest crowd at a sporting event in the United Kingdom since Covid-19 forced the first nationwide lockdown in March 2020.

There were a few scuffles outside as a minority competed with each other to prove there were some things we do not miss from having crowds back, as were the boos that some directed toward players taking a knee against racism before kickoff, but overall the atmosphere and decibel level reached a mark expected of a far larger audience.

The heightened sense of occasion perhaps inhibited the game’s early stages. Both sides played within themselves, with Chelsea having the better of a first half in which Timo Werner wasted several promising situations.

The progress made under Thomas Tuchel has come about even as Werner searches for anything like the form that saw him signed from RB Leipzig for £47 million last summer, but eventually his profligacy had to prove costly, even if he was not solely to blame.

Tuchel’s decision to swap Cesar Azpilicueta to right wing-back, with Reece James taking up a position as the right-sided centre-back in a 3-4-2-1 formation, had the benefit of nullifying Jamie Vardy’s pace in behind the defence, but it meant Chelsea were robbed of James’ superior delivery in attacking situations.

Moreover, the England international would never have been in the situation he was to give the ball away for the decisive goal. With 63 minutes played, James’ risky forward pass was intercepted by Ayoze Perez — first by his knee before the rebound struck his hand — and Luke Thomas picked up the loose ball to find Tielemans in a central position.

The Belgium international strode forward and unleashed a powerful drive that had Chelsea goalkeeper Kepa Arrizabalaga, preferred as the starter to Edouard Mendy, clasping at thin air and cued scenes of delirium among the Leicester fans toward the players who ran toward them in celebration.

In search of an equaliser, Tuchel threw on Ben Chilwell, Christian Pulisic, Kai Havertz, Callum Hudson-Odoi and Olivier Giroud and Chelsea belatedly found a sustained goal threat as Schmeichel saved brilliantly to divert Chilwell’s header onto the post then produced arguably an even better stop to deny Mount.

As stoppage time approached, Chilwell thought he had forced an equaliser — what would have been a calamitous own goal as a cross cannoned in off and Caglar Soyuncu and then substitute Wes Morgan — but VAR intervened with a tight offside call.

Chilwell was distraught. His desire to make a £50m move from Leicester to Chelsea last year was an example of the step up the “Big Six” feel they represent, yet it is Leicester’s recruitment that should be recognised in the wake of this latest triumph.

Following title glory, N’Golo Kante and Danny Drinkwater went to Chelsea and Riyad Mahrez joined Manchester City, while Harry Maguire came in and then moved on to Manchester United. In their wake, funds were reinvested smartly in players like Wesley Fofana, James Maddison and, appropriately enough, Tielemans.

After that late scare, Leicester hung on to end an unwanted record as the team with the most FA Cup final appearances — four, in 1949, 1961, 1963 and 1969 — without a win. It was the only domestic trophy the club had never won, but no longer.

As manager Brendan Rodgers celebrated his first trophy since arriving in 2019, Khun Top was encouraged to celebrate with the players, handle the trophy and pose for selfies amid jubilant scenes. Leicester face Chelsea again on Tuesday in what could turn out to be a Champions League qualification playoff, but that can wait.

Their dreams have come true, again.