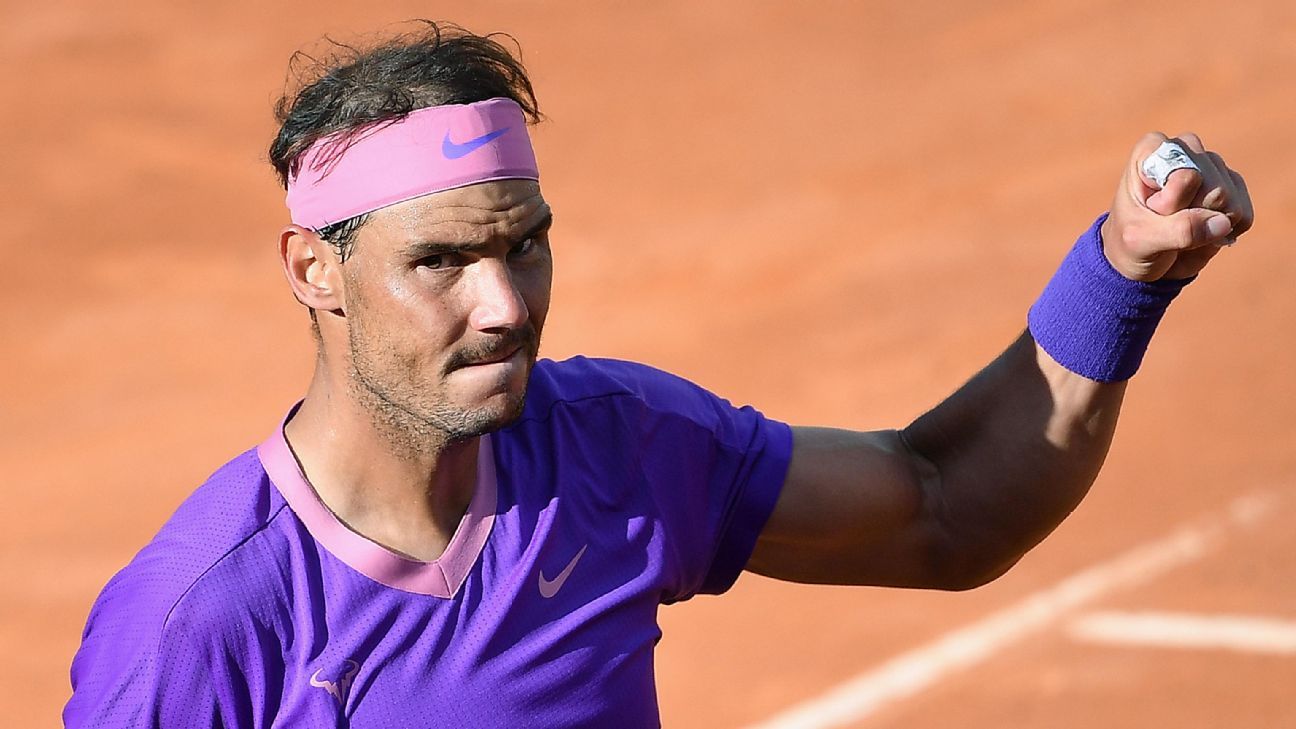 ROME — When it comes to long, grueling clay-court battles, nobody is better than Rafael Nadal.

Nearing his 35th birthday, the Spanish great showed he still has the stamina to withstand much younger challengers in a 3-6, 6-4, 7-6 (3) comeback win over 22-year-old Denis Shapovalov on Thursday that secured him a spot in the Italian Open quarterfinals.

Nadal roared back from 3-0 down in the second set and saved two match points on his serve at 6-5 in the third.

Nadal, who will be aiming for a record-extending 14th French Open title next month, was also pushed at times in a straight-sets win over 19-year-old Jannik Sinner that ended late Wednesday.

Then there was his long three-set victory over Stefanos Tsitsipas, another 22-year-old, in the Barcelona Open final last month.

Nadal struggled to hold serve at the start, while Shapovalov was blasting aces and winners with his one-handed backhand. Nadal dug in, though, and started to win the longer rallies.

Shapovalov missed a backhand to conclude a long rally on his first match point then shanked a forehand on his second. A costly double-fault handed Nadal a 3-1 lead in the tiebreaker, and the Spaniard quickly closed it out after 3 hours, 27 minutes.

The loss dropped Shapovalov to 0-15 against players ranked among the top five since beating Nadal in Montreal in 2017.

Nadal, a nine-time champion in Rome, will next face either Alexander Zverev, who won the Madrid Open on Sunday, or Kei Nishikori.

Djokovic will next face Tsitsipas, the Monte Carlo Masters champion who eliminated Madrid finalist Matteo Berrettini 7-6 (3), 6-2 in a matchup of top-10 players.

“It’s going to be a battle,” said Djokovic, who has reached the quarterfinals in each of his 15 Rome appearances.

After spectators were banned from the opening rounds because of the coronavirus pandemic, capacity was at 25% as part of the Italian government’s reopening plan.

“It was not good, it was great,” Djokovic said. “I missed the crowd as much as anybody else — one of the biggest reasons why I keep on playing.”

A five-time champion in Rome — with his last title coming in September when the tournament was moved amid the pandemic — Djokovic is looking to boost his clay-court game before Roland Garros starts at the end of the month.

It’s been a rough start to the clay season for Djokovic, with a third-round loss to Daniel Evans in Monte Carlo followed by a defeat to Aslan Karatsev in the semifinals of his home tournament, the Belgrade Open.

Djokovic said he played “at least 20-30% better” than he did against Taylor Fritz in his opening match in Rome.

“So I’m on a good trajectory,” he said. “And hopefully tomorrow will be even better.”

Opelka served 18 aces and won 52 of 69 points on his serve to record his third consecutive straight-sets win this week. He entered Rome on a six-match losing streak that included dealing with a bout of COVID-19. He has yet to drop his serve in three matches this week.

Sabalenka, who overcame Barty in the Madrid Open final Saturday, committed more than twice as many unforced errors as Gauff, 36 to 17.

It’s the fourth time this season that the 17-year-old Gauff has reached the quarterfinals. She said she was helped by a breathing technique she learned from watching the Japanese anime series “Demon Slayer.”

“The main character, Tanjiro, he has this breathing technique right before he fights. When I get nervous, I notice that slowing down my breathing helps me a lot,” Gauff said. “At least five to 10 times it was in my head. You got to do the total concentration breathing that Tanjiro does.”