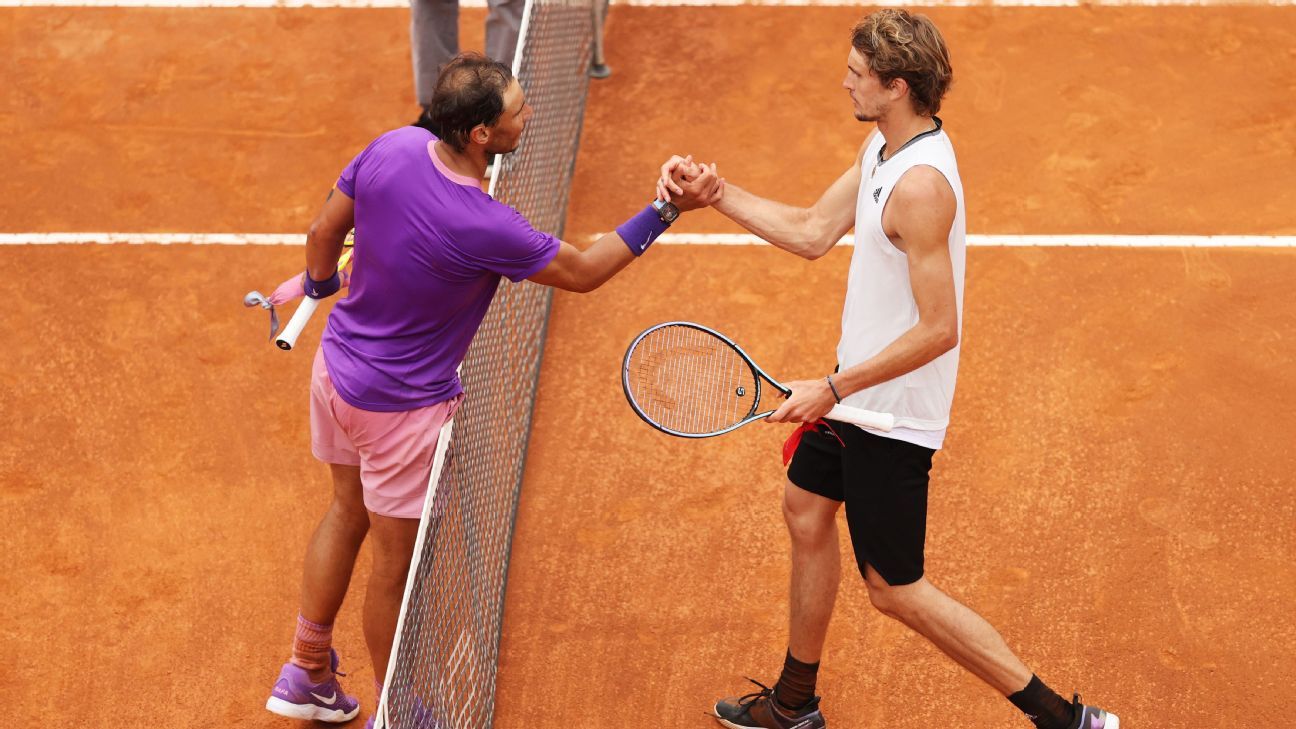 ROME — Rafael Nadal ended a run of three straight losses to Alexander Zverev with a convincing 6-3, 6-4 win over the German player Friday to reach the Italian Open semifinals.

Zverev had beaten Nadal in straight sets at the same stage in Madrid a week ago, but their latest meeting went the Spanish star’s way from the start.

Aiming for a record-extending 10th Rome title, Nadal raced to a 4-0 lead in the first set and saved all eight break points he faced in the second.

“I played more solid than Madrid. Conditions are different,” Nadal said, alluding to the fact that the high altitude of the Spanish capital allowed Zverev to dominate more with his serve there. “Here are little bit more normal conditions. I was able to control a little bit more.”

It was a stark contrast from Nadal’s long three-set comeback win over Denis Shapovalov a day earlier, when the clay-court master saved two match points.

Nadal’s semifinal opponent will be big-serving American Reilly Opelka, who reached his first Masters semifinal with a 7-5, 7-6 (2) win over Argentine qualifier Federico Delbonis.

For Nadal, the only real moment of concern came when he tripped over the service line while running down a drop shot when he was serving for the first set.

The crowd of about 2,500 let out a collective gasp as Nadal tumbled onto the clay and rolled over onto his back wincing in apparent pain.

After putting Nadal’s reply away for an easy winner — he had still managed to get the ball over the net — Zverev hopped over the net to check on the 20-time Grand Slam champion.

Nadal got up, though, dusted himself off and served out the set with his back and even headband still covered in clay.

“Some lines are higher than the rest of court, so when you touch the line, it’s dangerous,” Nadal said.

Zverev, the 2017 Rome champion and winner of the trophy in Madrid last weekend, had numerous opportunities to recover from an early break in the second set, but Nadal stepped up his game each time and closed it out on his first match point with a perfectly executed serve-and-volley.

“I played a very solid match, with not too many mistakes — playing the way that I have to,” Nadal said. “It’s an important victory for me against a great player.”

Opelka, who is 6-foot-11 and not previously known for his clay-court tennis, overwhelmed Delbonis with 18 aces to record his fourth straight-sets win of the week.

“I’m surprised. Clay is not really my thing — not much of an American thing,” Opelka said. “It’s probably just a fluke. But I’m OK with it.”

Opelka also saved all four break points he faced. But it wasn’t just his serve that made the difference.

The 47th-ranked player hit a delicate slice volley drop-shot winner in the final game before the tiebreaker and then produced a difficult backhand cross-court passing shot to set up the only match point he needed.

Opelka entered Rome on a six-match losing streak that included dealing with a bout of COVID-19.

“I wish I could use that as an excuse, but the first 10 weeks of the year I just didn’t play well. It wasn’t COVID-related at all,” Opelka said. “Obviously after you lose eight weeks in a row, the one thing you want to do is practice — not get COVID and be stuck inside for 2½ weeks. But I guess it worked out.”

Nadal called it a “big challenge” facing Opelka because the American “has almost an unreturnable serve.”

“I need to be ready to accept [surrendering winners,” Nadal said, “and be patient on the return.”