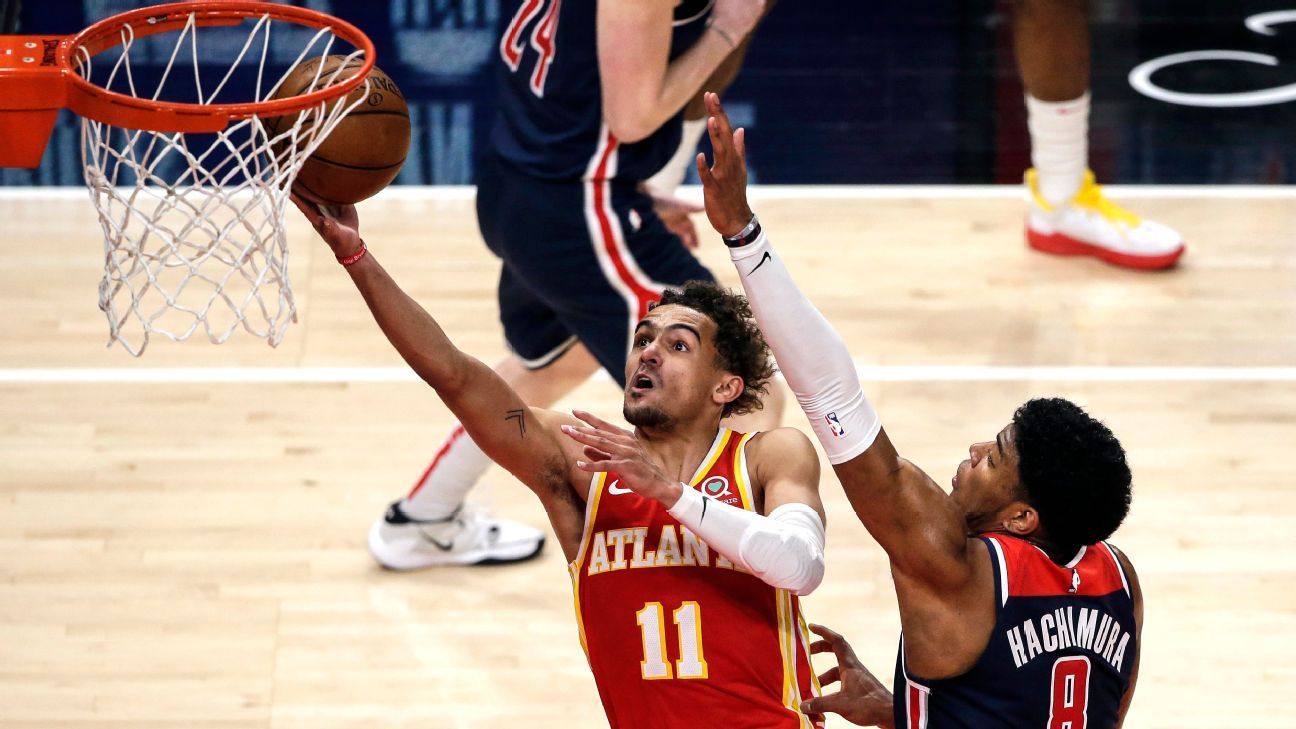 With the addition of play-in games to the 2021 NBA playoffs, the scramble for seeding is wilder — and more important — than ever, with almost every game down the stretch having significant postseason implications.

• How the play-in tournament will work

Game 2: No. 10 Washington at No. 9 Indiana — winner moves on in play-in; loser is eliminated

Game 3: Washington/Indiana winner at Boston/Charlotte loser — winner is No. 8 seed in playoffs

Here’s a breakdown of the key games from Wednesday and what the results mean for the seedings:

The Atlanta Hawks took another step toward securing homecourt advantage in the first round of the playoffs with a fourth-quarter comeback to beat the Washington Wizards.

Atlanta’s victory over Washington, which would have clinched a spot in the play-in tournament with a win of its own, officially secured a playoff berth for the Hawks for the first time since 2017. More importantly, it puts Atlanta in the driver’s seat to get the fourth seed in the Eastern Conference playoffs.

All Atlanta has to do is win a pair of home games against two of the league’s worst teams — the Orlando Magic Thursday and Houston Rockets Sunday — to clinch that fourth seed, as those victories would clinch the Southeast Division title.

Washington, on the other hand, will have to wait to try to clinch the final play-in tournament spot for either Toronto to beat Chicago on Thursday or for its home game against Cleveland on Friday. The Wizards are a game behind the Indiana Pacers and Charlotte Hornets in the battle to finish eighth in the East — and get two chances to win one game to make the playoff field. Washington owns the tiebreaker over Indiana, but does not against Charlotte.

If all three teams finish tied, Charlotte — which owns the tiebreaker over both Indiana and Washington — would finish eighth, while the Wizards would be ninth and the Pacers 10th. Charlotte and Washington play each other on the final day of the season, a game that could wind up deciding who gets the eighth seed in the East. — Tim Bontemps

The Boston Celtics are officially headed to the play-in tournament.

While there was very little chance of Boston escaping that fate after back-to-back home losses to the Miami Heat, a loss to the hapless Cleveland Cavaliers — with Kemba Walker, Marcus Smart, Jaylen Brown and Robert Williams all sitting out with injuries — officially sent Boston to the play-in. The Celtics need one more win, or one more loss for the Hornets and Pacers, to officially clinch the seventh seed in the East.

Boston owns the tiebreakers against Charlotte, Indiana and the Wizards, the three teams below them in the standings.

Boston’s loss also clinched a playoff berth for the New York Knicks, who are in the postseason for the first time since making the Eastern Conference semifinals in 2013.

The more consequential result of this game, ironically, was Cleveland getting a rare victory. The Cavaliers, who had gone 4-21 in their last 25 games entering Wednesday, and had lost 11 games in a row dating to April 21, went from a three-way tie at 21 wins with the Oklahoma City Thunder and Orlando Magic for the third-fewest wins in the NBA into a tie with the Minnesota Timberwolves for the fifth-worst win total in the league.

Cleveland has had the fifth pick in the draft each of the past two years, and saw its lottery odds take a notable decline with Wednesday’s win. — Bontemps

Whether it is dazzling the crowd with cross-court bounce passes or shimmying after a 4-point play, one thing is certain: The Nets have proven to be winners with James Harden on the court. Rather than react to a double-digit late-season win over a likely play-in team like the Spurs (San Antonio missed a chance to wrap up the No. 10 seed in the West), look at the difference in big-picture numbers when Harden is on the court this season: With Harden, Brooklyn is now 28-7. Without him, they’re 11-11.

In his first game in more than a month, Harden finished with 18 points, 7 rebounds and 11 assists in 26 minutes. So, while the Nets are still not at full strength (Kyrie Irving missed Wednesday’s game with a facial contusion), they can take some solace in the numbers pointing to Brooklyn being just fine — so long as they have a healthy Harden. — Malika Andrews