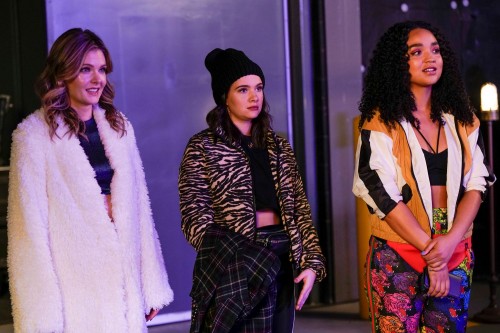 The women of Scarlet will return for one more year. Freeform just announced they’ve renewed The Bold Type for a fifth and final season. There will be just six episodes this time around, down from the 16-episode order of the fourth season.

The drama series provides a glimpse into the outrageous lives and loves of those responsible for Scarlet, a global women’s magazine. The rising generation of Scarlet women leans on one another as they find their own voices in a sea of intimidating leaders. Together they explore sexuality, identity, love, and fashion. The Freeform series cast includes Katie Stevens, Aisha Dee, Meghann Fahy, Sam Page, Matt Ward, Melora Hardin, and Stephen Conrad Moore.

The fourth season of The Bold Type averages a 0.06 rating in the 18-49 demographic and 162,000 viewers. Compared to season three, that’s down by 37% in the demo and down by 32% in viewership. The 16-episode season wrapped in July and is currently the channel’s lowest-rated series.

Here’s Freeform’s announcement about the fifth and final season, as well as footage from the cast’s recent virtual table read:

Today, Freeform announced that the critically acclaimed series “The Bold Type” will return for a fifth and final season. A signature hit for the network, the series will celebrate Kat, Jane and Sutton’s journey in the farewell episodes set to air later this year. Nikohl Boosheri will also recur as fan-favorite character Adena El-Amin later in the season.

“‘The Bold Type’ is a brand-defining show for Freeform. It’s been refreshing, relatable and fun to watch Kat, Jane and Sutton lean on their friendship to navigate the complexities of modern life,” said Tara Duncan, president of Freeform. “It’s one of my favorite shows, and I am proud that we are giving the series the sendoff Wendy, the incredible cast and crew, and the beloved fans all deserve.”

“It has been a joy to watch Kat, Jane and Sutton live out their lives on screen over the last four seasons and become an inspiration for so many young women along the way,” said Universal Television president Erin Underhill. “This show will always hold a special place in my heart for its authenticity and ability to provoke meaningful conversations with each episode. I want to thank Wendy Straker Hauser and all the writers for telling these amazing stories that will undoubtedly live beyond the pages of Scarlet Magazine.”

“‘The Bold Type’ has been a gift that has truly changed my life. I spent my twenties in New York City working in magazines, so in many ways the show feels very personal to my experiences,” added showrunner and executive producer Wendy Straker Hauser. “I have truly loved writing this show and living in this world. I will miss it terribly, but I am so grateful for the opportunity and glad to know it’s been a comfort to so many people out there.”

Season four of “The Bold Type” left Kat, Jane and Sutton at their limits, both personally and professionally, at Scarlet Magazine. In the final season, our trio is on the brink of defining who they really are and how best to leave their mark on the world. Their futures are bright, and their love and support for each other will never change.

Consistently named as one of TV Guide’s “100 Best Shows on TV,” the series has been heralded in the media as “charming,” “heartfelt” and “affecting” with its focus on relevant topics and friendship goals. Fans all over the world have praised the series for its timely and impactful storylines that connect with viewers on a personal level.

What do you think? Do you watch The Bold Type? Are you glad it’s coming back for a fifth season? Is this the right time to end the show?

What is G League Ignite? Jaden Hardy, Dyson Daniels lead NBA Draft Prospects in 2022
10 Trendy Places to Shop If You’re a Fan of Lulus
True Detective Season 4 a Go at HBO; Kali Reis To Star
Grey’s Anatomy: Where Are They Now?
Singer King Zachary Celebrating the Release of His New Single ‘As Above’