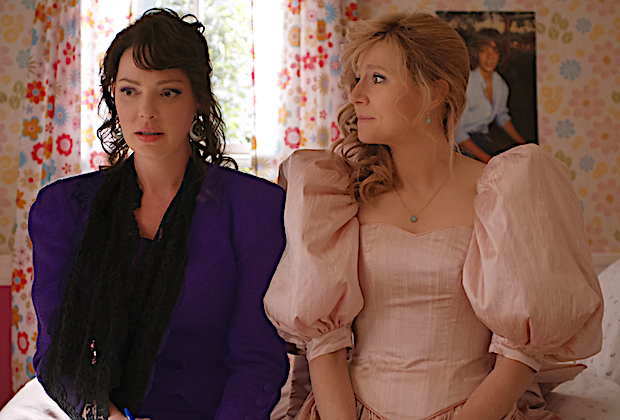 I’d love to say that I was wowed by Netflix’s series adaption of Kristin Hannah’s novel, Firefly Lane (dropping Wednesday, Feb. 3). Truth be told, I dive into every show that I’m tasked with reviewing hoping the same thing — to be dazzled, stunned, impressed.

I was none of those things. There was nothing there that we haven’t seen before, done smarter, more wittily and incisively, simply better.

Yet I didn’t hate it, as the trailer made me fear that I would. In the end, the show, developed by Maggie Friedman (late of ABC’s short-lived Eastwick and Lifetime’s also-short-lived Witches of East End) was a run-of-the-mill soap opera, an inoffensive diversion shining a spotlight on two extremely appealing actors — Katherine Heigl and Sarah Chalke — who were making the best of what… well, simply wasn’t the best.

The plot follows a pair of lifelong friends, impulsive firecracker Tully Hall (Heigl as an adult) and bookish sparkler Kate Mularkey (Chalke as an adult), through their introduction as eighth-graders to their grownup relationship. What happens in between is sorta like a game of chick-flick bingo. If it’s a cliché, if it’s expected, if it’s obvious, as surely as the BFFs call each other bitch as a term of endearment, it’s in there.

Yet at no point could I turn away. At no point did I even want to. Early on, I was hooked. After that, Season 1 washed over me like a dose of bedtime Benadryl. It was strangely enjoyable, from the terrible ’80s wigs to the “Wait, did I read this book already?” predictability of the plot twists.

It was, not to put too fine a point on it, not great. Not original. Not inventive. Not challenging in any way. But maybe because of the stressful times we’ve been through of late, it was just what I wanted.

It asks literally zilch of us.

Subtlety isn’t a consideration on Firefly Lane. The series is a sledgehammer. A pretty, pretty sledgehammer. From the yin/yang differences between Tully and Kate (as kids, the excellent tag team of Ali Skovbye and Roan Curtis, the former working a full pound of lip gloss, the latter saddled with glasses the size of dinner plates) to the Very Big Issues that concern their ’80s TV-station boss, Johnny (Ben Lawson), everything is written in oversized, bold text. 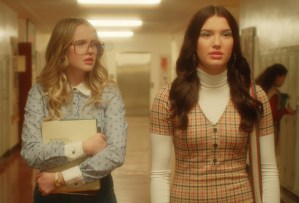 Along the way, actors make the most of their material. In particular, Beau Garrett is a “Whoa!” as Tully’s pothead mom, Brandon Jay McLaren charms as an eventual crush, and Jenna Rosenow makes a fine Leslie Grossman stand-in as an early-oughts Edina Monsoon. And there’s not an instance in which Chalke’s earthiness doesn’t serve her well. Even when the scenarios into which Kate is thrown feel utterly fake and manipulative, her portrayer’s innate likability reels us right in.

Heigl, on the other hand, comes across like she knows she’s headlining a paint-by-numbers dramedy that will stay with us for… Oops. Already forgotten. And it’s confounding. She’s an executive producer on the project as well as one of its leads, yet she walks through it like it was a pilot that she didn’t ever expect to make it to air.

So, is Firefly Lane good? Alas, no. But is it entertaining? Kinda — and not even in a mean way. It’s an adequate time-passer till the shows for which you’re really jonesing are back on. There’s no more shame in indulging in it than there is in equating sex to ice cream.

I don’t need to tell you that Firefly Lane does that, too, do I? Yeah, at this point, I didn’t think so.

THE TVLINE BOTTOM LINE: Firefly Lane is the definition of C-grade television. It’s not going to KO anyone, but if you’ve got 10 hours to waste, it’s OK.