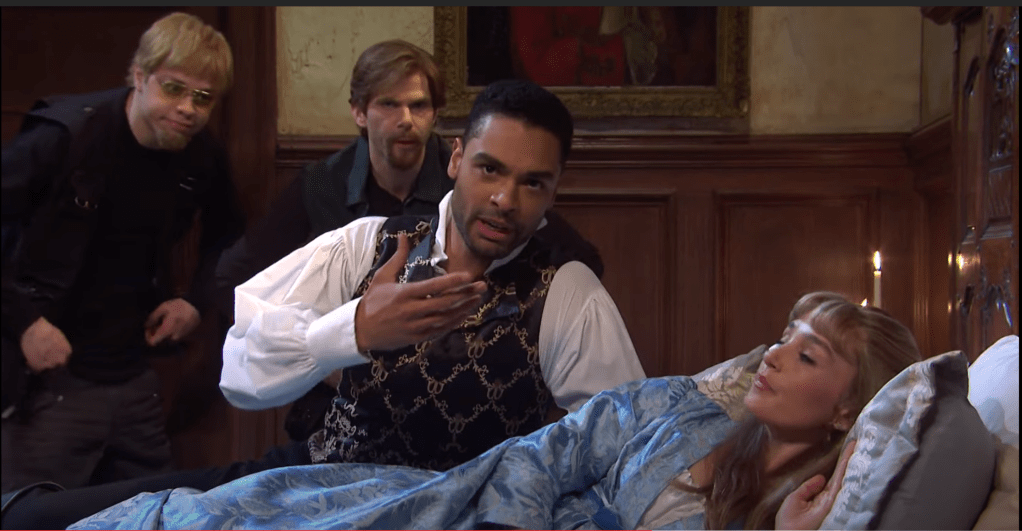 After Page channeled his Simon Basset character in the opening monologue while trying to convince viewers that “he’s just a normal guy” and nothing like the Duke, the British-Zimbabwean actor reprised the Bridgerton character in a skit later in the show.

The sketch takes on one of the most talked about parts of Bridgerton, its sex scenes. It features Page playing himself on the set of the Netflix Regency-era drama. SNL‘s Chloe Fineman, who appeared in Page’s monologue dressed like Daphne Bridgerton, plays Page’s co-star Phoeve Dynevor, who portrays Daphne on Bridgerton. The skit starts off by recreating the famous wedding night heart-to-heart between Simon and Daphne, in which he confesses to her that “I burn for you.” (Page also dropped the famous line in his monologue.)

The Bridgerton director, played by Kate McKinnon, then yells “cut,” and announces that Page and  Fineman’s Dynevor are to do a sex scene next. But Bridgerton’s regular intimacy coordinator, Paula, had been exposed to Covid, so Netflix has brought in a backup, Richie (Mikey Day) and his assistant and nephew, Randy (Pete Davidson).

The duo have background in on-set special effects, including explosions, wind and “gross-out stuff” and just recently became certified as intimacy coordinators via Zoom after work in their original field had dried up because of Covid.

Turns out the two are not familiar with the script.

“Didn’t read it, it seemed like a girl show to me,” Davidson’s Randy says.

Day’s Richie assumes that Simon and Daphne are brother and sister to protests from Page and Fineman’s Dynevor.

“It’s Netflix, they’ve got some dark stuff on there,” Richie explains.

The intimacy coordinators proceed to give Page a Ziploc bag full of modesty garments of questionable cleanness and hand Fineman’s Dynevor green screen-friendly pasties they had invented.

Even more questionable is the sex scene choreography Richie and Randy demonstrate. (You can watch the skit above.)

A lot has been written about the sex scenes on Bridgerton, which employs Lizzy Talbot as intimacy coordinator.

In an interview with Deadline last month, Julie Anne Robinson, who directed Episode 6, which included the bulk of the Season 1 sex scenes, as well as the opening episode, described the process of creating a sex scene on the show.

“I would rehearse with the actors, we would talk through the scene in detail, and we would decide what story was that the scene was telling,” Robinson said. “Then Lizzy, who I trust immensely, went away, and it was almost like a stunt rehearsal. I would be doing dance sequence in the room next door, they would be doing an intimacy rehearsal. Lizzy would say, ‘Hey we are ready, we’ve got something to show you’. I would go in, I would look at what they did, and I would be specific about changes that I wanted just in the same way as I would be with a fight sequence and a stunt coordinator.”

Because Bridgerton‘s bedroom scenes were shot in an authentic Regency home, “there were room monitors in the room when we were doing the sex scenes, and they wouldn’t leave,” Robinson said.

She pulled the curtain on the actual filming of the sex scenes, which the SNL skit alluded to.

“People don’t really understand it, you have to make sure the actors are comfortable by giving them props to place between their bodies so that they feel comfortable, so there is no physical contact actually, it is all an illusion,” she said. “We would be shooting a scene, the room monitor would be sitting there looking, and I would have to call out ‘Hold’. Lizzy, the intimacy coordinator, would run in with whatever object it was, a piece of yoga mat, or whatever, and then she would run out, I would say ‘Continue.’ It’s the least romantic thing you could possibly imagine.”