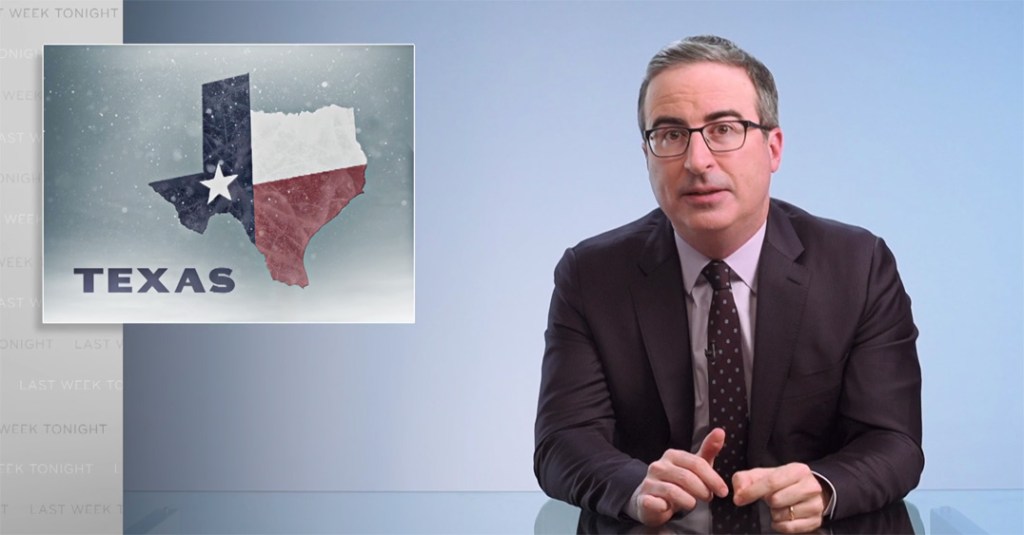 It’s another unpleasant week of news and probably one of the most devastating news was the winter strom that hit the country — specifically Texas. During the first part of Last Week Tonight, John Oliver unpacked the “full-blown humanitarian crisis” happening in Texas as the state was facing no electricity, lack of clean water and dozens of death.

True to form, Fox News blamed the power outages during the Texas storm on green energy, specifically frozen wind turbines. Tucker Carlson was adamant about this, saying that green energy means a less reliable power grid. He punctuated that with “it’s science!”

Oliver responded to Carlson’s thoughts by pointing out how his advertisers basically include “a man in a sexual relationship with a pillow”. He also dragged Carlson saying, “just because you loudly insist that something ‘is science’! doesn’t make it science…that’s science”

“He knows that’s horsesh*t,” said Oliver. The host unpacked the facts saying that Texas relies on wind power for only about 25% of its total electricity. The vast majority of Texas energy comes from thermal heat sources and those were impacted by the storm. Even if Texas wind turbines would stop spinning, the state would be, as Oliver put it, “in deep sh*t”.

Texas is not on the federal power grid. The majority of the state is on its own grid which was part of the cause for the calamity. Texas leaders designed it this way to avoid federal regulation.

Olive said that independence meant that Texas was limited in its ability to import energy from neighboring states and it also meant that there was significant pressure on Ercot, the company that manages the state’s grid.

During the storm, Ercot scrambled to meet surging demands. They have since admitted that Texas was “‘seconds and minutes’ away from catastrophic months-long blackouts”.

This isn’t the first time Texas was impacted by a winter storm. Although it wasn’t as strong, 10 years there was a storm that caused major outages. As a result,  federal regulators warned that power plants needed to winterize to prevent this from happening again. Oliver cut to foootage of state officials 10 years ago saying what would happen if they didn’t act. Obviously, they didn’t act.

“So much of the problems this week stem from Texas’ state philosophy of ‘every man for himself’ and that attitude has defined the response from their elected officials,” said Oliver.

Tim Boyd, mayor of Colorado City, Texas posted on Facebook, “No one owes you are your family anything nor is it the local government’s responsibility to support you during trying times like this!” The backlash was so severe that he resigned.

Then there is “the saga of Ted F*cking Cruz” as Oliver said. As heavily reported, Cruz went to Cancun with his family. When photos of him surfaced on social media, he returned to Texas the next day saying that it was his original plan to go to Cancun and drop his family off then come back.

Things just got worse for Cruz as he admitted that wasn’t the plan. He basically threw his children under the bus saying that they wanted to go to Cancun and he was just “trying to be a good dad.”

On top of all that, a text chain between Heidi Cruz and neighbors was leaked proposing that they all go on vacation to Cancun.

Then there is former governor and former U.S. Secretary of Energy Rick Perry who said that Texas would live without electricity to keep federal regulators out of their business. Of course, Oliver did not mince words in his response.

“Oh f*ck off Rick Perry,” shaded Oliver. “Far be it from me to question the wisdom of a man who failed running for president twice, and who came in 12th on Dancing with the Stars.”

He continued, “This mess only happened because those in charge didn’t implement critical lessons from 10 years ago and while I’d like to think they’ll learn lessons from this week, remember who you’re dealing with here.” From there, pics of Cruz and Abbott flashed on the screen.

Oliver urged viewers to help citizens of Texas out via feedingtexas.org and said, “They deserve better than a pat on the back from their fortitude and independence as they shiver to death and representatives who f*ck off to Mexico at the first sign of danger.”