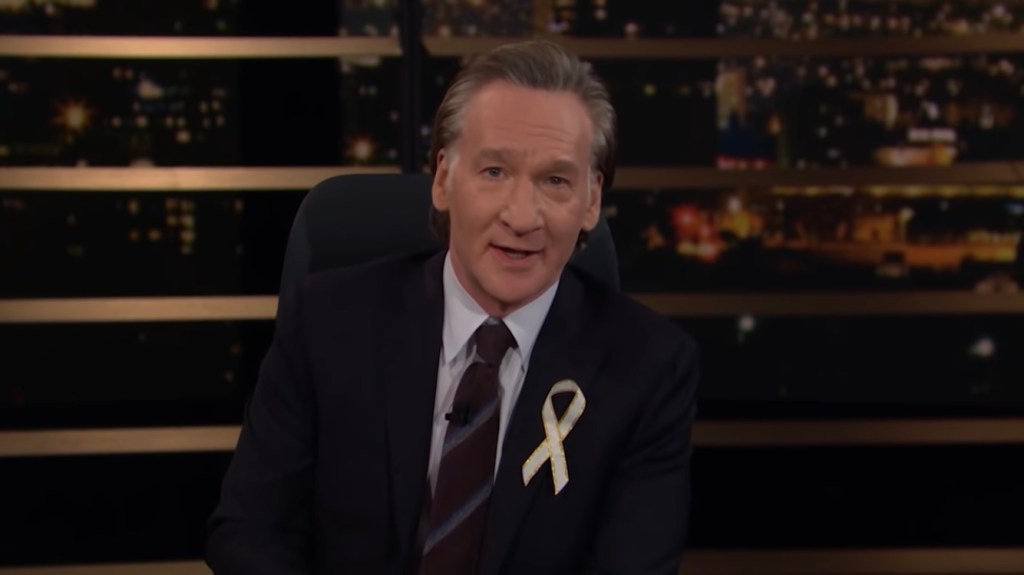 In honor of awards season, Real Time host Bill Maher affixed a special ribbon to his lapel and spoke out about an urgent new cause.

“It’s time to raise awareness about a very serious problem: raising awareness,” he cracked in the “New Rules” show-capper, “We raise too much of it, and it’s making us crazy, anxious and depressed. Must we be sad about everything all the time most of which we can’t do everything about?”

A daunting list of diseases and medical conditions are being acknowledged in the month of March, which, he joked, “comes in like a brain injury and goes out like deep-vein thrombosis. This coming week, he reminded his (still limited and socially distanced) audience, is World Salt Awareness Week — “a whole week to be aware of salt.”

A dense thicket of ribbons, flags, ads and hashtags, Maher said, has grown around this glut of misguided cause advocacy. People have become “so aware of every bad thing that could happen that we’ve completely run out of colors,” he lamented. Maher said used to like purple, but now that he’s been told it represents Alzheimer’s, lupus and the opioid epidemic, “it scares the sh-t out of me.”

Pink, Maher continued, has infiltrated a number of corners of society as a beacon of attention for breast cancer. The color can be found everywhere from the office supply aisles of Staples to drill bits for fracking (that not a joke, and it’s a product which Maher noted “is probably giving us cancer”).

Most famously, the NFL signed on several years ago to turn player cleats, field markings and coaches’ hats bright pink every October for Breast Cancer Awareness Month. After going “on the record” as being against breast cancer, Maher despaired, “I’m trying to escape for a few hours – can’t I watch the game without thinking about cancer?! We’ve all heard about it. It’s like raising awareness for death.” Here, he imagined one unenlightened soul having his awareness raised. ‘Hey, what’s that black ribbon for? ‘Death’ ‘What’s that?’ ‘It’s when you’re not alive anymore. Would you like to hear more?!”

One culprit, Maher has concluded wasn’t a particular color but a very specific item in every kitchen: milk. “Someone in the ’80s looked at a milk carton and said, ‘What a waste, not using milk as a vehicle for missing children to plead with you to put down that shredded wheat and get out there and crack my cold case!’”

Airline crew members, he went on, now wear Black Lives Matter pins throughout flights on some airlines. “Can I just get a rum and coke and hold the white guilt trip until we land?”

Ribbons and all of the other signals, Maher said, are “not there to make me think, so much as to raise awareness of what a good person you are. This is to activism what putting a flag on your car is to patriotism.”