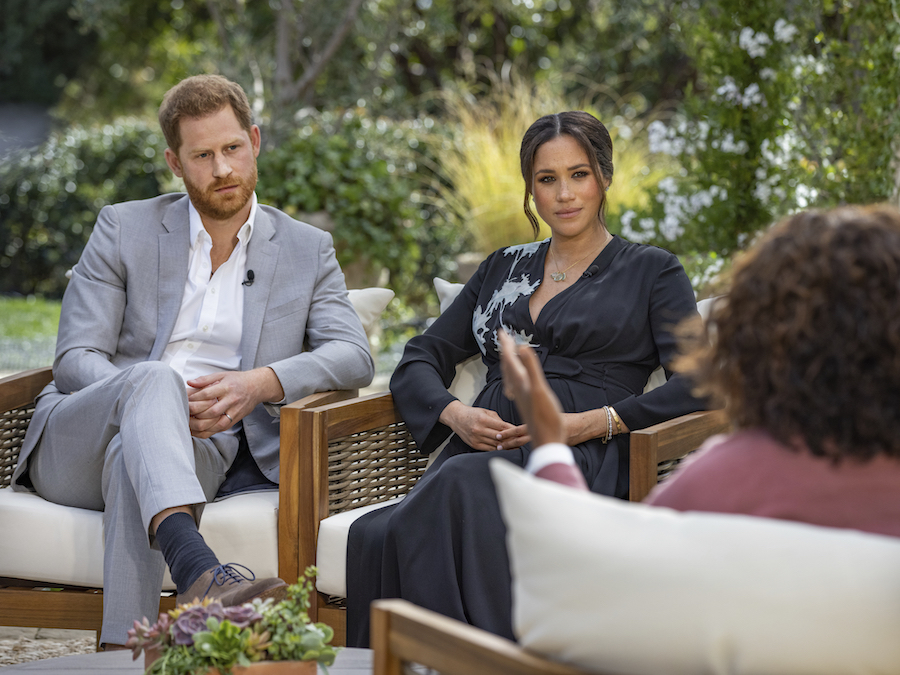 Oprah Winfrey promised us shocking revelations, and she did not lie. Meghan Markle and Prince Harry dropped bombs in their blockbuster CBS interview with the legendary U.S. presenter — and judging by reactions to the sit-down, you’re either with Team Harry & Meghan or against them.

During the brutally frank discussion, Markle revealed she considered taking her own life because her mental health took such a battering during her time in the UK, while she also said she was questioned about her son’s skin color. Other revelations included that their second child will be a girl, and that Prince Charles stopped taking Prince Harry’s calls at the height of their break from the royal family.

There was universal agreement that the interview had extracted shocking moments and there was widespread praise for Winfrey, who helped expose the monumental fault lines in the British royal family. But reactions to the content of Markle and Prince Harry’s comments were predictably polarized.

On Team Harry & Meghan were friends, including Serena Williams. The tennis player tweeted a statement in which she said: “She teaches me every day what it means to be truly noble. Her words illustrate the pain and cruelty she’s experienced.”

Amanda Gorman, the poet who shot to global fame for her performance at Joe Biden’s inauguration, said the royal family had missed an opportunity for change by allowing Markle to become disaffected. “Meghan’s strength will certainly redefine family everywhere,” she added.

Meghan was the Crown’s greatest opportunity for change, regeneration, and reconciliation in a new era. They didn’t just maltreat her light–they missed out on it.

Unclear if this will change the Royal family, but Meghan’s strength will certainly redefine family everywhere. Think of the women who will be inspired to stand up for their lives, the partners who will be kinder & more courageous than the kin they were born into.

Martin Luther King Jr.’s daughter Bernice King said she was “grateful that #MeghanMarkle is still here” after the Duchess of Sussex opened up about her suicidal thoughts. She added:

Royalty is not a shield from the devastation and despair of racism. #MeghanMarkle

On the other side of the debate, Good Morning Britain presenter and former CNN anchor Piers Morgan did not hold back. No fan of Markle, whom he has accused of being a social climber, Morgan said the interview was “contemptible.” He added: “I wouldn’t believe Meghan Markle if she gave me a weather report.”

Let’s be clear: Prince Harry and his wife just spent two hours trashing everything the Queen stands for & has worked so hard to maintain, whilst pretending to support her.
And they did it while her 99yr-old husband Philip is seriously ill in hospital.
It’s contemptible. pic.twitter.com/W8dBoNI7d8

This interview is an absolutely disgraceful betrayal of the Queen and the Royal Family. I expect all this vile destructive self-serving nonsense from Meghan Markle – but for Harry to let her take down his family and the Monarchy like this is shameful. #OprahMeghanHarry pic.twitter.com/F2QDxELSsr

Morgan hosted former Fox News presenter Megyn Kelly on Good Morning Britain. She accused Markle of making complaints “from her castle” that will be “totally unrelatable” to most people.

‘A lot of people have had death threats. It’s a faction of modern life if you are famous. They have to deal with this.’ @Megynkelly has an ‘unsympathetic’ view of Harry and Meghan’s pleads for protection. @susannareid100 debates the point with Megyn and @piersmorgan. pic.twitter.com/oywmFcJhb3

Those not taking sides included former Star Trek actor George Takei, who put it like this:

Maybe they should just make Oprah queen and call it a day.

It’s true what Meghan Markle told @Oprah, we don’t know what goes on in people’s lives behind closed doors. That’s something we can all remember.

Meanwhile, in the UK, a number of newspapers published special edition front pages focusing on some of the biggest revelations from the interview. Below are the front pages of tabloids the Daily Mail, The Sun, and The Daily Mirror: