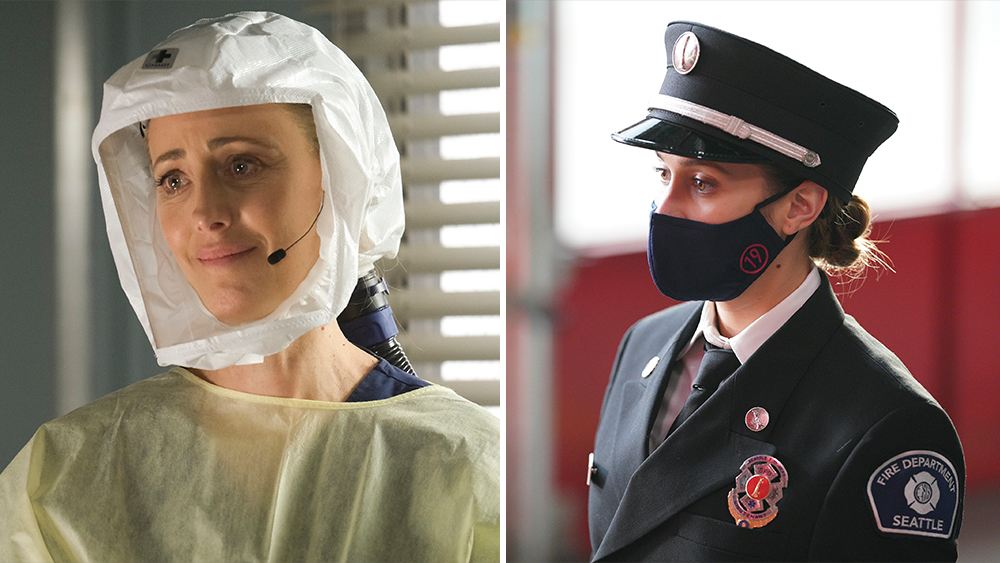 SPOILER ALERT: This story includes details about the March 11 episodes of ABC’s Grey’s Anatomy and Station 19.

Just like they did in the fall finale, Grey’s Anatomy and Station 19 returned from hiatus with another powerful and deeply emotional crossover. Tonight’s episodes dealt with the aftermath of the dramatic rescue by the off-duty Station 19 team of two Black teenage girls who had been kidnapped and Robert and Dean’s arrest by an overzealous white cop. It also bid farewell to one of Grey’s Anatomy‘s doctors, Andrew DeLuca (Giacomo Gianniotti), just like the ominous ABC promo hinted. (Read Deadline’s interview with Gianniotti here.)

While Station 19 firefighters all were trying to process the events of the day before, discussing issues of racism in policing, the series brought to successful conclusion the multi-season kidnapping storyline. When we last saw DeLuca in the fall finale cliffhanger, he had just spotted Opal — the suspected child-trafficking kingpin who had triggered his manic episode last season — in the parking lot of Grey Sloan and, joined by his sister Carina, drove off, following Opal’s car. The DeLucas got Carina’s girlfriend, Station 19 Captain Maya Bishop, and her team to help with the operation. Eventually, Opal was arrested but not before her accomplice stabbed DeLuca.

With his sister by his side, DeLuca was rushed to Grey Sloan where he underwent successful emergency surgery, led by Owen and Teddy, but he later developed DIC and, despite Owen and Teddy’s best efforts, died in the operating room.

As he was teetering on the brink of death, DeLuca got to spend time on the beach in a dream sequence with Meredith who remained unresponsive in the episode, hooked to a ventilator.

“I don’t know what happens from here Meredith, but no matter what happens, I want you to know that I never felt seen the way you saw me, I never felt inspired the way you inspired me, you made me want to be not just my best self but better,” he said. The duo, whose budding romance was interrupted by the pandemic, had a touching final conversation before DeLuca told her, “You’ll be OK, Meredith,” and ran to his late mother who waved at him. Just as his body was flatlining in the OR, he reunited with his mom on the beach in a sweet embrace.

In an interview with Deadline, Grey’s Anatomy and Station 19 showrunner Krista Vernoff discusses the decision to kill off DeLuca this season, the significance of the way he died and the impact his sudden passing will have on his sister, Meredith and the other doctors at Grey Sloan. She also teases a big Teddy-Owen arc following their newly found bond fighting for DeLuca’s life and a George Floyd/BLM storyline on Station 19. She also explains whether we will see DeLuca again and addresses Meredith’s status — as well as the status of the series, which has not been renewed for Season 18. (You can read more about that here.)

DEADLINE: When did you decide that the DeLuca character will die? Was his mental health crisis last season a point where you had considered writing him off?

KRISTA VERNOFF: No. It was one of the first creative imaginings that I had as I imagined what this season would be. It’s like I’ve said before. Like, the stories tell themselves. I just try to write them down as fast as I can, and this story told itself to me as I was walking on the beach imagining the season, and I was like, oh, no, really?! But it felt powerful and important, and I don’t always know why, but that was the story that came.

DEADLINE: Was it important to you that DeLuca completely redeemed himself before he died? He helped the kidnapped girl and Bailey earlier this season, and did one, final brave deed getting Opal arrested.

VERNOFF: Yes. It was extremely important to me that it be clear that he was through his mental health crisis, and that the following through on the sex trafficking story was rooted in his bravery and goodness as a human, and that I think we did well. I didn’t want to risk sending the message that he died because of his mental illness. He died having come through his mental health crisis, bravely and powerfully, and he died a hero. He saved, probably, a lot of lives in the future.

DEADLINE: What was your conversation with Giacomo about his character being written off?

VERNOFF: This story was the most vivid story I had coming into the season. I knew what we were doing exactly, and exactly how we were doing it, and so, once we had a shape, and we knew when in the season it was going to happen, Giacomo came in to meet, and we pitched it to him. He was so lovely and so relieved that it wasn’t a mental-health crisis story, that it was all the things that I’ve already said. He was just relieved that we were being honest to this character. That he was going out courageously, that he wasn’t killing himself. That he wasn’t hurting someone. That he was clear in terms of his mental health, and going out in this really noble, brave way. He was brave.

DEADLINE: What will be the impact of DeLuca’s death on his sister, Meredith and the other doctors at the hospital?

VERNOFF: There’s a profound impact. He had become beloved, and all those doctors had come together in the intervention and really come to care about him. So, there’s a real impact on his sister and on everyone who loved him. The big sort of question mark is Meredith. You know, Meredith is not awake and, while she was with DeLuca on that beach, there’s a question mark as to how it will impact her.

DEADLINE: In DeLuca’s conversation with Meredith on the beach, he sounded prophetic when he told her, ‘Meredith, you’ll be okay.’ Should we read much into it — is he right?

VERNOFF: Yeah. Should you read into it? I don’t know. More will be revealed.

DEADLINE: Can you tell us when we will know Meredith’s fate?

VERNOFF: Don’t you want to watch the show, and see how it unfolds?

DEADLINE: Yes, but there is also a lot of anxiety involved.

DEADLINE: How was it working with Giacomo and the rest of the cast on his final episode?

VERNOFF: I feel like everyone brought their A-game in terms of performance on all the story lines, and I’m really grateful to Giacomo. What I said to him at the table read when we read this episode is, thank you for playing this character so powerfully and so beautifully that you’re giving the world an opportunity to feel our collective grief in your death.

DEADLINE: After DeLuca’s death, will we see him on the beach? This has turned into a great venue for you to bring back any character you want.

VERNOFF: There was some discussion of bringing him back to the beach, but we all felt like his exit with his mom was so profound and so powerful. I cried harder watching that than I’ve cried watching anything on our show in years, and so, we didn’t want to see him come back to the beach. You will see him again. He does appear in more episodes this season, but I don’t want to spoil what those are.

DEADLINE: Anyone new coming to the beach this season?

VERNOFF: I would say, chances are good you’ll see other people on the beach.

DEADLINE: In his final hours, DeLuca seemed to have brought Owen and Teddy together in their grief when they couldn’t save him. And Teddy had just let Koracick go when that happened. Are Owen and Teddy finely coming closer to reconciling?

VERNOFF: Owen and Teddy have a big story arc over the next couple of episodes.

DEADLINE: On Station 19, watching the characters processing the events of the fall finale, it almost felt like listening to the series’ writers in the writers room, processing themselves the events of last summer. How was it writing those conversations between the different firefighters?

VERNOFF: Well, we have a very diverse cast and a very inclusive cast and writers’ room, and we honor and include many voices and many perspectives as we talk about these profound subjects. So, the process is a really inclusive one.

DEADLINE: What is next for that group? Dean filing a lawsuit is a new element that could provide a glimpse into the justice system. Is it something that will be a major plot line going forward?

VERNOFF: Yes. This is a major plot line going forward through our whole season. Our season is still living in May and June of 2020, and so, if you recall, in April, May, June of 2020, we were processing as a nation the death of George Floyd, and the uprising in the wake of that, and so, we are bravely confronting a lot of these issues moving forward on the show.

DEADLINE: Will George Floyd’s death be incorporated in the show?

DEADLINE: Mostly on Station 19 or across both shows?

VERNOFF: Across both shows to some degree, but it’s very central on Station 19.

DEADLINE: You finished the fall run with two really heavy episodes back-to-back that included the passing of Bailey’s mom, and now DeLuca died in the first episode back. Is there some light and breezy Grey’s coming up?

VERNOFF: Is there light and breezy Grey’s coming up? Maybe later in the season. We’ve got some pretty intense stuff coming, and it is just the nature of the year we’re living in. It’s just a reflection of the year we’ve just walked through, and I would argue that there are beautiful moments of light. Not breezy, but when DeLuca’s mom shows up on that beach. I mean, what’s more beautiful than that? Yes, it’s profound, and yes, you feel your feelings, but I would argue that these episodes are not just dark. There’s lightness and beauty inside the darkness.

DEADLINE: What can you tell us about that “pretty intense stuff coming”?

VERNOFF: The impact of the death of DeLuca hits everyone differently, but it hits one of our characters who has reached their saturation level and their breaking point.

DEADLINE: Do you know yet if this would be the final season of Grey’s?

VERNOFF: I don’t know yet.