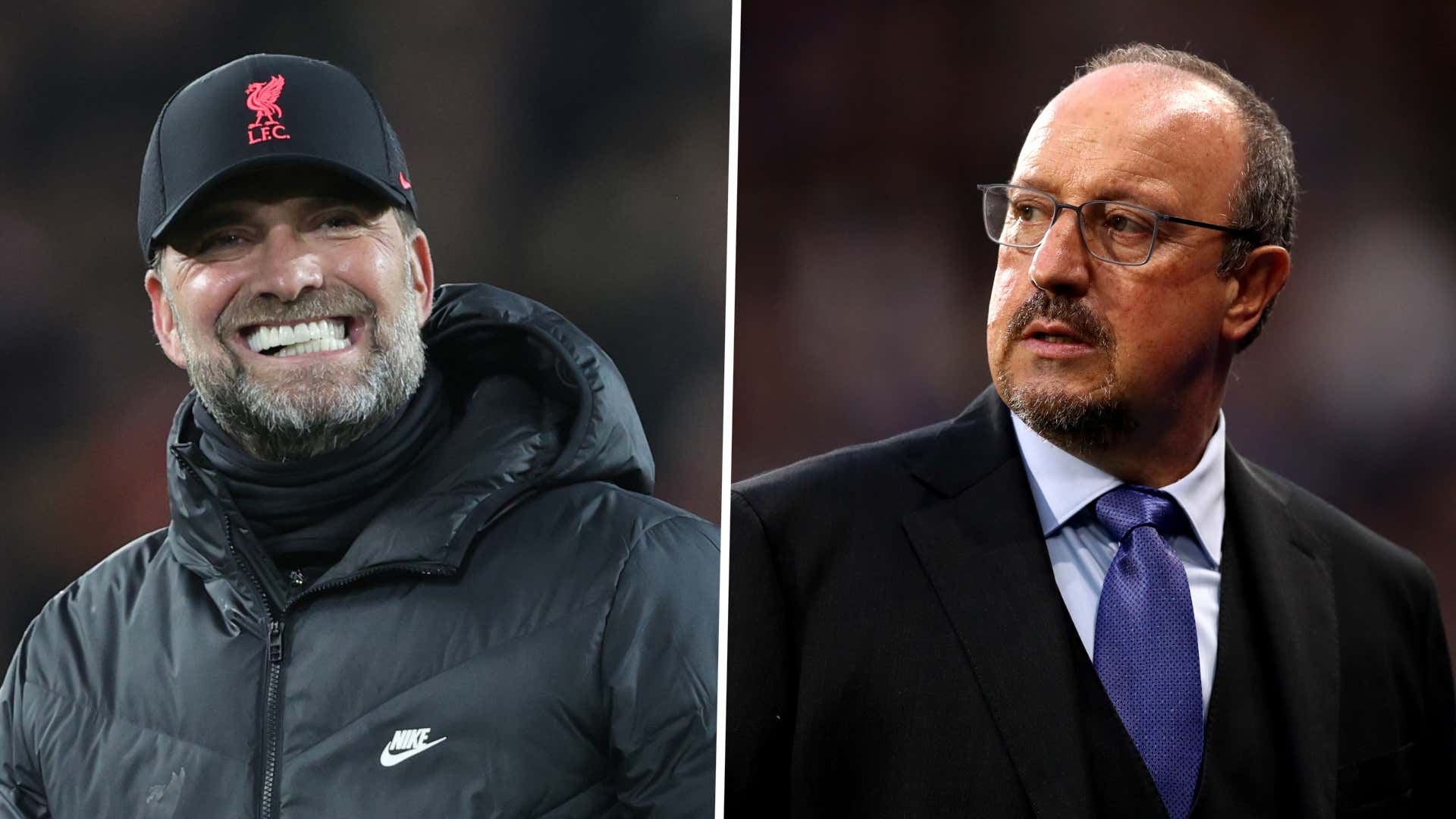 There is a fair chance that on Wednesday night, Rafa Benitez’s name will ring out around Goodison Park for the first time all season.

The problem is, it will not be the Everton fans who are singing it.

What a situation the Spaniard finds himself in, heading into the 239th Merseyside derby. His own supporters have little time for him, while his rivals – many of whom still adore him deep down – are ready to twist the knife and make life even more uncomfortable.

And make no mistake: a big win for Liverpool this week could well spell the end for Benitez.

Everton are tumbling fast. Without a win in seven matches, they have slipped to 14th in the Premier League table, only six points above the bottom three and facing a run of December fixtures which includes not only Liverpool, but also Arsenal, Chelsea and Leicester City.

Even the ‘easier’ games – Crystal Palace and Burnley away, Newcastle at home – do not look especially appealing.

Performances, generally, have been poor. The 5-2 home defeat to Watford, in which they conceded four times in the final 12 minutes, stands out, but of more concern to supporters has been the lack of direction and fight shown in other games, notably the losses against Aston Villa, West Ham, Wolves and, most recently, Brentford.

November brought only one point, an unconvincing home draw with Tottenham, and only one goal, an Alex Iwobi consolation at Molineux.

MORE: Who will Man Utd appoint as next manager?

Videos posted on social media following the 1-0 defeat at Brentford on Sunday showed fans – and by no means a minority either – berating their players from the away end at the final whistle.

It has, worryingly, become something of a common sight (and sound).

Benitez would argue there are mitigating factors – most notably the injury which has kept Dominic Calvert-Lewin, his main striker, out of action since the end of August – but he knows things need to change quickly, if he is to avoid the fate of Roberto Martinez, Ronald Koeman, Sam Allardyce and Marco Silva, all of whom who were dismissed by Farhad Moshiri, the club’s majority shareholder.

His attempts to defend his players after the Brentford loss will not have gone down well.

“We are frustrated,” he said. “But we cannot complain about the effort of the players and the intensity they put in the game.

“Obviously, we don’t want to lose, but you can see the togetherness of the players and the way they were fighting until the last minute.”

Plenty would disagree there, although there are, it must be said, many Everton fans who are sympathetic towards Benitez, and who appreciate the difficulty of the job he inherited.

This, after all, is a club that has lurched from one manager to another – there have been five permanent bosses and two different caretakers since David Moyes ended his 11-year spell in 2013 – and one which has employed perhaps the most scattergun and unsuccessful recruitment transfer policy in the league during that time.

The failures have been many, and they have been expensive. From Oumar Niasse to Cenk Tosun, via Theo Walcott, Davy Klaassen, Moise Kean, Yannick Bolasie, Andre Gomes, Jean-Philippe Gbamin and Morgan Schneiderlin.

Everton have spent big, but they have generally spent poorly, be it under Steve Walsh, hired as the genius behind Leicester’s 2016 title win and then dismissed along with Allardyce two years later, or Marcel Brands, the current director of football who was appointed in a blaze of publicity but has done little to justify his lofty reputation since.

Everton’s haphazard spending meant Benitez had little to work with after replacing Carlo Ancelotti in June. The Toffees spent less than £2 million ($2.6m) on five senior players in the summer transfer window, trimming their wage bill by releasing the likes of Bolasie and Walcott, as well as James Rodriguez, and loaning the unhappy Kean to Juventus.

Their squad, unsurprisingly, looks weak and unbalanced as a result.

There is no quality cover for Calvert-Lewin, with Salomon Rondon an ageing and inadequate replacement; a big issue in the centre of defence, where Michael Keane, Ben Godfrey and Mason Holgate have struggled, and Yerry Mina is too often unavailable; and an alarming lack of creativity in midfield.

Benitez’s strength is his coaching, his ability to organize and prepare a side, but there has been little evidence of that following a bright enough opening month.

Everton rank 18th in terms of average possession and 17th for total passes. They make a lot of tackles and a lot of interceptions, but no side has been dribbled past more, and only Tottenham and Watford have won the ball in the final third on fewer occasions.

It is that, the style of play, which is draining supporters as much as anything.

Everton fans, generally, are realists. They do not expect miracles, title challenges or 20-game winning runs, but they, like any others, would like the chance to dream, to have hope and to enjoy watching their team.

Instead, they have been forced, for too long, to endure a series false dawns, dour football and, far too often, a team which does not represent the club’s values and history.

The appointment of Benitez represented another slap in the face for many. The 61-year-old will always be associated with Liverpool, a Champions League winner at Anfield and someone who once referred to Everton as a small club, and it did not take a genius to work out that it would not be long before this marriage of convenience ran into trouble.

“The connection of the fans and players last year was not great,” said Benitez on Sunday. “At the beginning of this season, it was fantastic. To bring back this connection, the fans are expecting the players to give everything, and then to win games.”

Wednesday would be a good place to start, of course. Everton beat Liverpool the last time the sides met back in February, and have not lost a Goodison derby in nearly five years, but the form guide says they will have their work cut out this time, against a Reds side that is scoring at a rate of three goals per game this season.

Pessimism is to be expected on derby week, of course, and there are plenty of Reds who are heading into this week’s game nervous, expecting a response and a typically awkward fixture for their side.

Results do not lie, though Liverpool humiliated Manchester United last month and there are genuine fears among Evertonians that if Jurgen Klopp’s side were to score early then, given the Blues’ chronic lack of confidence and the home crowd’s current mood, something similar could happen at Goodison.

If it does, we can expect Benitez’s name to echo around that famous old stadium.

And if that happens, we can expect Everton to be looking for a new manager sooner rather than later.

French Open 2022: Why are Russian and Belarusian players competing at Roland-Garros but not Wimbledon??
Warriors vs. Mavericks live score, updates, highlights from Game 2 of Western Conference Finals
Bodybuilder Calum Von Moger Reportedly Out Of Hospital, Walking At Home After Fall
This Is Us’ Mandy Moore Gave This Warning Ahead of Series Finale
Grey’s Anatomy Round Table: Is Nick the Key to Saving the Residency Program?