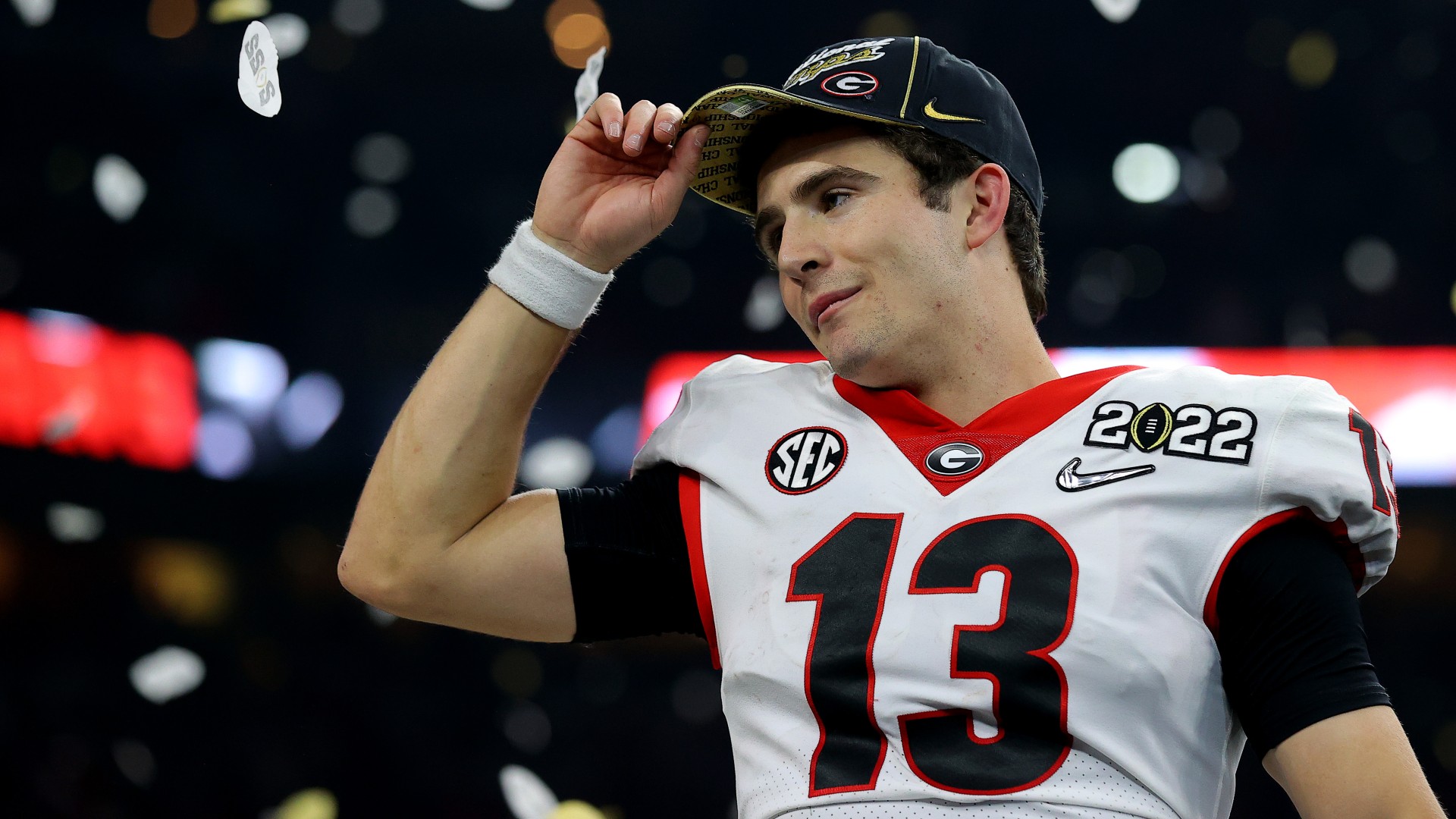 Georgia’s walk-on quarterback-turned-national championship leader is coming back for one more year between the hedges.

Stetson Bennett is coming back for Year 5 under Kirby Smart and Co., fresh off leading the Bulldogs to their first national championship since the 1980 season. He comes off a year in which he completed 185 of 287 passes for 2,862 yards and 29 touchdowns to only seven interceptions en route to leading Georgia to a 14-1 season.

Here is the announcement from his Instagram story, per Seth Emerson of The Athletic:

While his return does give Georgia a seasoned veteran and proven playmaker at the most important position, it will also affect the Bulldogs’ quarterback room, which has already seen attrition with former USC transfer JT Daniels apparently the way out.

With that, Sporting News breaks down why Bennett returned to Georgia and what that means for the quarterback position moving forward.

Why did Stetson Bennett return to Georgia?

If Bennett has hopes of making the NFL, the 2022 Draft would be a good time to throw his hat into the ring. This year’s quarterback class is generally considered weaker than last year’s, despite producing such players as Liberty’s Malik Willis, Ole Miss’ Matt Corral, Pitt’s Kenny Pickett and Cincinnati’s Desmond Ridder, among others.

That said, Bennett likely was never going to challenge for a top draft grade alongside those players, so it doesn’t matter whether he were to declare in 2022 or 2023, when quarterbacks such as Alabama’s Bryce Young and others will garner the most attention from pro scouts. Bennett could simply want to produce more tape in an effort to produce a better draft grade. Or it’s possible the Blackshear, Ga., native simply wants one more go-round with his home-state team.

The introduction of NIL deals also makes it possible for Bennett to capitalize financially on his championship season, where in previous seasons he would not.

What does this mean for Georgia’s quarterback room?

With Bennett returning for another season, Georgia has seven quarterbacks listed on its current roster. That said, Daniels has reportedly entered the transfer portal, suggesting the former five-star recruit and USC starter will no longer be a part of the equation moving forward.

Following Daniels’ departure, the next-most experienced quarterback on Georgia’s roster is rising redshirt junior Nathan Priestley, who has not logged any stats since the 2019 season. Only two other quarterbacks (freshman Brock Vandagriff and redshirt freshman Carson Beck) have any passing attempts outside of Bennett.

Beck played in four games in 2021, completing 10 of 23 passes for 176 yards and two touchdowns to two interceptions. He also played a single game in 2020, failing to log any stats. Vandagriff, a true freshman in 2021, appeared in two games in 2021, attempting one pass all season (it was an incompletion). That said, Vandagriff has the highest pedigree of any quarterback currently on Georgia’s roster: The Georgia native and former five-star recruit was the No. 17 overall recruit, No. 4 quarterback and No. 2 player in the state of Georgia in the 2021 signing class, per 247Sports’ Composite rankings.

Does that mean Caleb Williams won’t transfer to Georgia?

Georgia was considered a dark horse candidate to land Williams, with early reports suggesting the Oklahoma freshman was eyeing Athens as a potential transfer destination. The transfer of Daniels out of the quarterback room may have given credence to such a move, but Bennett’s return complicates matters.

Smart has demonstrated a loyalty to incumbent starting quarterbacks in his six seasons at Georgia, most notably Jake Fromm in 2018. Smart stuck with the then-sophomore quarterback that season after leading the Bulldogs to the College Football Playoff championship game the year prior; Georgia fell just short of winning its first title since 1980 in a 26-23 overtime loss to Alabama. (Curiously, Alabama coach Nick Saban’s willingness to pull his starter, Jalen Hurts, in favor of Tua Tagovailoa is what led the Crimson Tide to the national title that season.)

Regardless, many Georgia fans and objective observers wondered why Smart would not give more playing time to freshman Justin Fields, the No. 2 overall recruit in the country behind only Clemson’s Trevor Lawrence. Fields played in 12 games as a freshman that season, completing 27 of 39 passes for 328 yards and four touchdowns, adding 42 rushes for 266 yards and another four scores. He transferred to Ohio State in the offseason.

All that to say: It’s unlikely Smart will replace Bennett at quarterback. That likely precludes Williams from transferring to Georgia, considering his main goal in leaving Oklahoma is to go to a school to get him ready for the NFL.

What year is Stetson Bennett?

Bennett’s Georgia bio lists him as a senior for the 2021 season. He will technically be a redshirt senior in 2022 after redshirting during the 2017 season, a year in which he served as the Bulldogs’ scout team quarterback.

It’s worth noting that, because the NCAA did not count the 2019 season against players’ eligibility due to the COVID-19 pandemic, Bennett could technically come back for a sixth year at Georgia in 2023, which would exhaust the final year of his eligibility. The NCAA grants four years of playing time to players (assuming they play in four or more games in a season). Bennett has met that minimum in each of his three non-redshirt years at Georgia.

How old is Stetson Bennett?

Daniel Craig Reportedly 1st Choice for Mister Fantastic Over Krasinski
Tom Cruise & Helen Mirren On Hand to Celebrate Queen’s Platinum Jubilee
Days of Our Lives Review Week of 5-09-22: The Devil Underestimates Everyone
Charmed Writers Promise Closure as CW Cancels Reboot After Four Seasons
Why I love the DIY filmmaking of Once