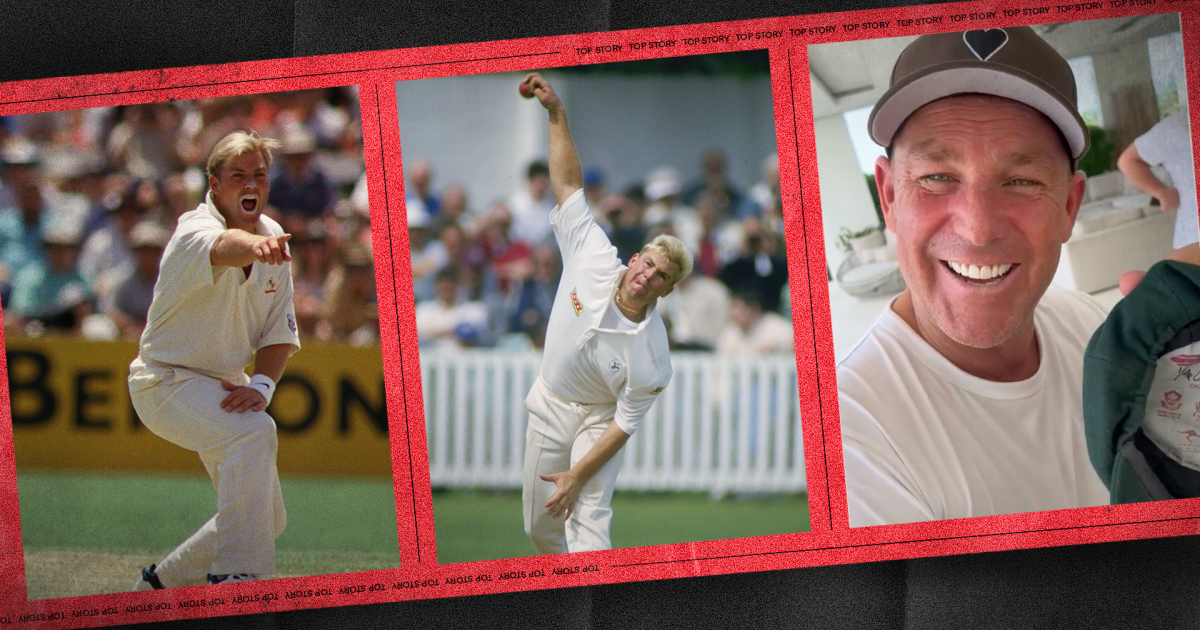 Tom Hall is the owner of The Sporting News

Yesterday began with breakfast with my family and helping my youngest with some of her online schooling. With that done, I wandered up the hill late-morning to catch up Warney, Neo, Gaz and Fred who had arrived at Samujana the night before.

Anybody that knows Shane knows his warmth, his caring, his sense of humour, his laugh, the twinkle in his eye and that glare from his glowing, unnaturally white teeth.  After a big hug and a “G’day”, we settle in around the outdoor dining table and the banter begins.

The first question is “How can we watch Australia v Pakistan test here in Thailand; the game’s about to start?” Cricket, AFL, golf and his family were the main passions in his life and Warney and cricket were never far apart.

I met Shane some 15 years ago at a charity poker tournament and I don’t know exactly why, but we bonded and became firm friends and travelled all over the world together, our families spent some time together and the Whatsapp bi-directional piss-taking never stopped.  It’s probably a very different friendship to that he had with his cricketing team mates and people around cricket and sport generally, that Shane interacted with, in the way only Shane could.

If you have played any form of team sport for a long time, you will know and understand the bond that forms between teammates who have experienced the ups and downs of a shared journey and how when you get together years later, you re-live over and over the stories of those days.  My heart goes out to his former teammates in Australia, the UK, India and wherever else his skills blessed the game and where he made cricket just that bit better and definitely more fun.

I can’t remember who said “The older I get the better I was”, but in Warney’s case, we all know he really was that good; the very, very best at what he did.  I will leave those eminently better qualified than I am to talk about his cricket skills and what he brought to the game.

A few balls into the Test, Warney jumps up and says “Mate, I bought you a present” and rushes off excitedly to his room.

You’re never quite sure what that means with Shane; it could be a bottle of his 708 gin, his fragrance, some book he thought I would enjoy or a random T shirt.  He came back with an armful of clothes looking like he had been at a yard sale. Neo and Gaz were obviously aware of what was going on as Neo pulled out his camera.

Shane has been working with me at The Sporting News for the past year or so and he presented me with his jumper from the 2005 Ashes Test, his 2008 IPL shirt and a one day international shirt and cap to place in the TSN offices in Australia and the UK.  Amazing gifts I knew the teams would love and cherish. Then he pulls out a worn green cap.

Being a cricket fan, I know the significance of a baggy green to an Australian and immediately said “Mate, you can’t give me that, it should be in a museum or something.” I tried to rebuff him, but he persisted and insisted.

“Mate, I want you to have this, don’t worry, I’ve got another one”

“I thought you’re only supposed to get one?” I countered.  A typical Warney story unfolded.

“I gave my first baggy green to Kerry Packer many years ago.  Over the years I twice told Cricket Australia that I had lost mine and got a couple more on the sly.

“Then for my 100th test they gave me one in a special commemorative case that I still have at home.  I donated one for the bush ires a few years ago which CBA bought for charity and this last one is for you.”

I was pretty gobsmacked and Neo told him to sign it and to get a picture of us.  That’s why this is going out today, as the video had been sent out to a few lads groups and I didn’t want things to be taken out of context.

My father went to Sydney Grammar and Sydney Uni from Hong Kong after WW2 and always told me with pride about the time Don Bradman had visited Sydney and he had got to meet him and be in a photo with some of his university mates.

Though Dad has lived most of his life in the UK, he was very firmly on Australia’s side when it came to an Ashes contest and in later years watched with glee as the Shane Warne era sides, generally. humped the Poms.

My uncle, Peter Hall, is the cricket nut in the family, a former Hong Kong international cricket player, he wrote the history of Hong Kong cricket and was never happier than at his 80th,when he was presented with a personally dedicated video message from Shane for him and his family.

Shane would always make time for fans around the world.

Shane’s baggy green needs to be back in Australia and at the appropriate time, I will work out with Shane’s family what to do with it. I don’t want to think about the events of later that day as it’s too raw, but I will close with this.

I have dined with Shane in many fine establishments, but rather than sample some of the local Thai fare, we tuck into a plate of Vegemite on toast.  Shane chomping away: “Geez, you can’t beat Vegemite with some butter, always great wherever you are in the world”.

An Australian through and through to what would turn out to be his last meal.

What a player.  What a man.  The word legend is used too lightly these days, but he is and always will be a legend.

I will miss my friend, but I will always smile and laugh when I think of him.