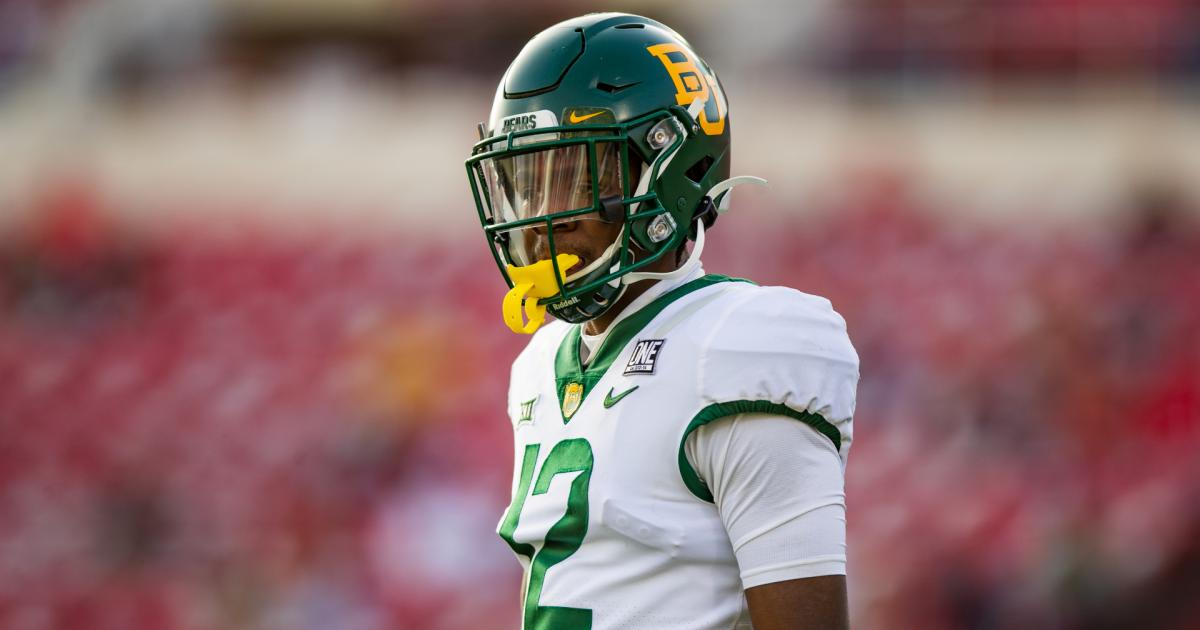 Cornerback Kalon Barnes and receiver Tyquan Thornton may no longer play for Baylor, but it appears the two former Bears teammates are still competing against each other.

Just two days after Thornton appeared to break John Ross’ Combine record with a 4.21 40-yard dash (later changed to 4.28), Barnes claimed the fastest time of the 2022 event — and the second-fastest 40-yard dash of all time.

Barnes ran unofficial times of 4.33 and 4.29 on Sunday — impressive, but nowhere near Ross’ mark. The NFL officially reviewed his times, however, amending his second run to 4.23 seconds, just one one-hundredth of a second off Ross’ time. Below are his two runs from the 2022 Combine:

Like Thornton, Barnes’ speed should significantly raise his draft stock. The NFL is always looking for the next great speedy receiver to take the tops off defenses — and the defensive backs who can actually keep up with them.

Of course, there’s more to Barnes than just his blazing speed. The Sporting News has everything you need to know about his time at Baylor:

Who is Kalon Barnes?

Barnes signed with Baylor in the class of 2018 as the No. 391 overall recruit and the No. 66 receiver in the class out of Silsbee (Texas) High School, per 247Sports’ Composite rankings. Barnes made the change from receiver to cornerback ahead of the 2018 fall camp and has remained at that position since.

Barnes wasn’t known just for his time as a receiver, however. According to The Beaumont Enterprise (Beaumont, Texas), Barnes won the Texas state championship in both the 100-meter and 200-meter dash as a senior in 2018, earning a state record in the former. He won the 100 with a time of 10.04, which would have set the national record were it not for wind conditions. (Per the Enterprise, UIL regulations stipulate wind conditions must be at or below 2.0 level for a record-setting time to count. Wind levels during Barnes’ run scaled at 3.2). It was still counted as his official time, just not among the national records. Barnes followed that with a time of 20.55 in the 200-meter dash, an event which he won by nearly half a second over the second-place finisher.

Barnes briefly joined the Baylor track and field team before committing full-time to football. His defensive statistics won’t blow anyone away, but he did manage several passes defensed and an interception over each of his last three years in Waco.

He played in 11 of 12 games as a freshman in 2018, compiling 10 tackles and one pass defensed. The following year, he appeared in all 14 of the Bears’ games, helping them to the Big 12 championship game where they ultimately fell to Jalen Hurts and Oklahoma. Regardless, Barnes compiled 22 tackles (including 0.5 for loss), one interception, six passes defensed and a forced fumble.

John Ross still holds the record for fastest 40-yard dash time, a mark he set in 2017 with an official time of 4.22. He later went on to become the No. 9 overall player in the draft, getting selected by the Bengals.

Barnes ran twice at the Combine, logging times of 4.33 and 4.29, respectively. The NFL later officially amended his time to 4.23, just .01 second off Ross’ mark. Barnes can at least take solace in the fact he is the fastest defensive back in Combine history; the previous mark was 4.28, set in 2017 by Jalen Myrick, who was the 222nd overall pick in the 2017 NFL Draft.

Ross, who also congratulated Thornton’s unofficial record on Friday, retweeted a post from Rich Eisen that discussed how close Barnes came to the receivers’ record:

The official 40 of @BUFootball @KaayBarnes_ ALMOST tied him with @WatchJRoss for the fastest Combine 40 ever.

Barnes was humble in acknowledging the record he had nearly set (and broken among defensive backs):