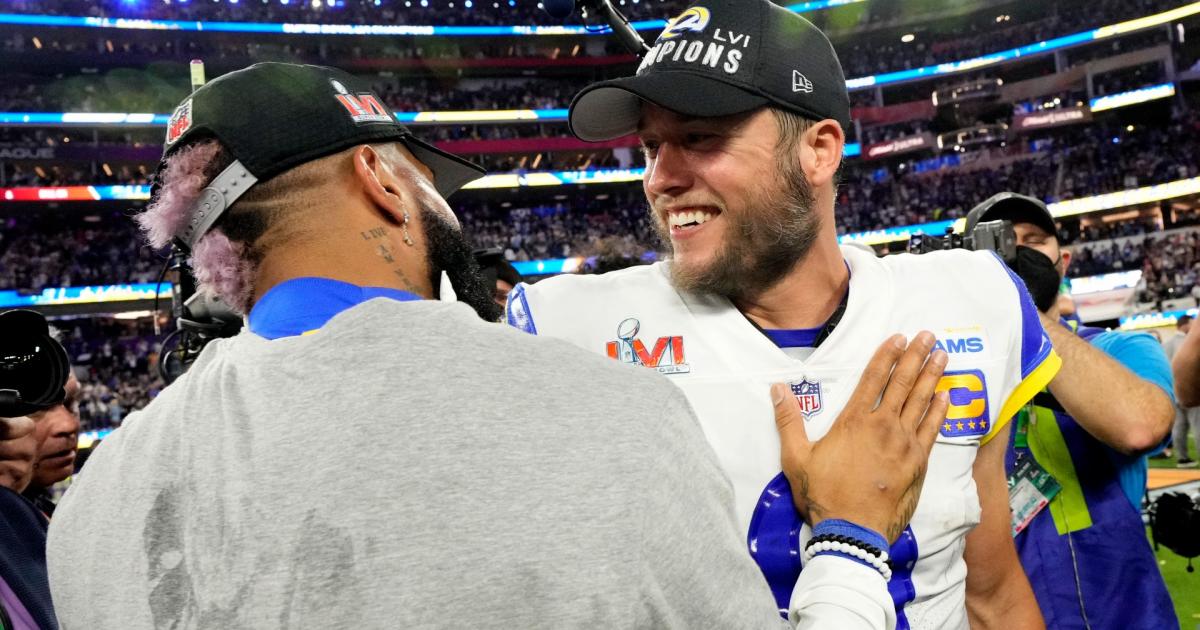 The Los Angeles Rams are coming off a Super Bowl, but the way their roster is built is leading them to have to make some big decisions. Chief among those is what to do with newly minted Super Bowl champion Matthew Stafford, who passed for 4,886 yards and 41 touchdowns in his debut season with the Rams. It was a classic example of a team making the exact right deal for itself at the exact right time, but Les Snead and the Rams made the deal knowing that Stafford would be a free agent after the upcoming 2022 season.

That will lead to the Rams having to make choices about what to do with midseason signings Odell Beckham Jr. and Von Miller, who are both slated to be free agents this season. Both players were key contributors to the Rams’ Super Bowl run, with Beckham in particular looking primed to have a big game in the Super Bowl before tearing his ACL in the second quarter.

Stafford, for the moment, has a cap hit of $23 million this season, a steal given the current quarterback market. According to The Athletic’s Jourdan Rodrigue, Stafford and the Rams are working on an extension that could reportedly go as high as $45 million per year.

For reference, Kirk Cousins’ cap hit is $45 million this season. Patrick Mahomes’ contract is currently averaging $45 million per season. Rodrigue added that Stafford is not making concrete demands about salary. If the Rams do get an extension done, Stafford’s cap hit will likely be lowered heading into 2022.

The Stafford equation is important to the Rams for a myriad of reasons. Beckham and Miller are both slated to be free agents, and the Rams don’t have first or second-round picks in this year’s draft. In 2023, they lose their first-rounder the Lions. This means that they won’t be getting blue-chip players in the draft for two years. That’s worth it for a Super Bowl, but the Rams undoubtedly won’t want to rest on their laurels, even with the Lombardi in Los Angeles.

This is how Les Snead wanted this roster built — he traded draft picks for proven talent — but we’re in uncharted territory as the Rams wait for the other shoe on this method to drop.

The silver lining for the Rams is they don’t have a ton of hard decisions to make this year, at least in skill positions. They’re about $13 million over the cap as of Monday, meaning that getting under it shouldn’t be too much of a challenge. They also aren’t losing key contributors yet. The Rams can extend Stafford and keep Beckham and Miller, but they’ll have to do it on relatively short contracts if they go that route.

Beckham, by all accounts, is a priority for the Rams. He was a reliable target for Stafford down the stretch, hauling in seven touchdowns in 12 games. As Beckham rehabs from an ACL injury, his market may be impacted, but the Stafford-Beckham connection was hard not to notice. The receiver made an immediate impact as defenses’ attentions were turned to Cooper Kupp.

Miller also benefited from playing next to a player who was among the best at his position. Playing next to Aaron Donald, Miller had five sacks in eight games, after having 4.5 in seven games with the Broncos. Miller had another four sacks in the playoffs, and was a positive influence on the entire defense. The Rams don’t appear to want Miller to be a mercenary, but re-signing him — even at 32 years old — could get up around $10-14 million per year.

The Rams have one final, big variable in all of this: Aaron Donald. Donald and the Rams are reportedly also trying to hammer out an extension, which would almost certainly surpass the current contract of T.J. Watt, the current highest-paid defensive player in the league. Once again, if that deal gets done, it may lower Donald’s $26.75 million cap hit this year. But eventually, Donald and Stafford’s contracts would have to collide, and that could be a difficult number to overcome even with the ever-increasing cap.

The Rams are in the middle of a good problem that can go bad very quickly: They have too much talent to keep on relatively good contract. Eventually Kupp will also get paid, not to mention left tackle Andrew Whitworth’s replacement if the 40-year-old lineman decides to retire. While Los Angeles certainly don’t want to be a one and done, the current roster construction does have the make-up of a house of cards, and will have to be handled with the delicate touch required to build one.

If the Rams are able to extend Stafford, Donald, or both, they’ll likely be able to keep both Beckham and Miller. However, don’t expect them to be long-term deals. If Beckham and Miller don’t want to bet on themselves or are seeking security, the Rams might not be able to afford that option. After all, Stafford and Donald have to get their due at some point, regardless of if it’s this offseason or three to four years down the line.