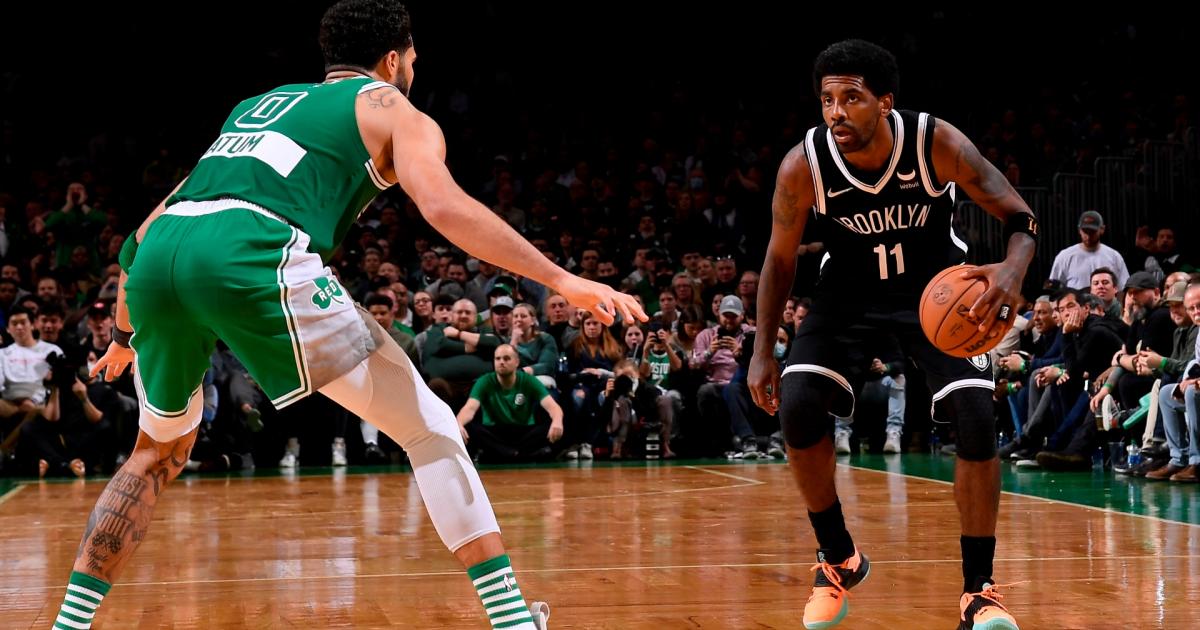 The saga between Kyrie Irving and Boston sports fans continues.

When the Nets took on the Celtics on Sunday, the TD Garden crowd let Irving hear it all throughout the game. From pregame warmups to every time he touched the ball on the floor, the fans let boos rain down on the All-Star guard who spent two seasons in Boston from 2017 to 2019.

Loud boos for Kyrie Irving in his first game back at the TD Garden since the playoffs last season. pic.twitter.com/EZRrLFKHn0

This has become a tradition every time Irving returns to his former city after his tenure with the Celtics came up well short of expectations.

Irving has previously torched the Celtics in Boston, but this contest was an outlier as the star guard only tallied 19 points in a close loss.

As the Celtics shot late-game free throws to seal the victory, superstar forward Jayson Tatum – who dropped a season-high 54 points in a duel with Kevin Durant – had to silence the TD Garden crowd for chanting “Kyrie sucks” in the closing seconds.

After the game, Irving sounded off on his relationship with Boston sports fans.

“I know it’s going to be like that for the rest of my career coming in here,” Irving told the media.

“It’s like the scorned girlfriend who wants an explanation on why I left, but still hoping for a text back. I’m just like ‘It was fun while it lasted.'”

Kyrie Irving on playing in Boston: “It’s like the scorned girlfriend, wants an explanation on why I left but still hoping for a text back… it was fun while it lasted” pic.twitter.com/DdUTbdvsd5

Irving went on to praise the Celtics organization, saying how he was grateful for his time in Boston.

“Everybody in the front office, everybody in that lockerroom treated me well. I still have lasting relationships with a lot of those guys. … We still remain close. To see the growth of a lot of guys I played with on this team and that core group back together – Marcus Smart, Al Horford, JB, JT – and then they add Derrick White, Robert Williams maturing.

“I was with these guys when they were pups,” Irving continued.

MORE: The Celtics are more than the hottest team in the NBA – they’re a threat to win the East

“JT just got drafted, JB was in his second year. I just have mutual respect for them and coming back in this environment, I know what it is. I just gotta lock in on the mission, stay focused and not have too many conversations with the fans on the side when they call me out by name.”

While the praise falls short of headlines compared to the “scorned girlfriend” comment, it does show that Irving still has love for the players he competed with in Boston.

The fans, however, will only add that comment to the running list alongside Irving burning sage on the Garden floor before his first return game in Boston, followed by him stepping on the Celtics’ logo at center court after his last playoff game at the Garden last season.

This was Brooklyn’s final game in Boston this season unless these two teams face off in the playoffs for the second consecutive year, so the Irving versus Celtics fans drama will be put on hold until the next meeting.