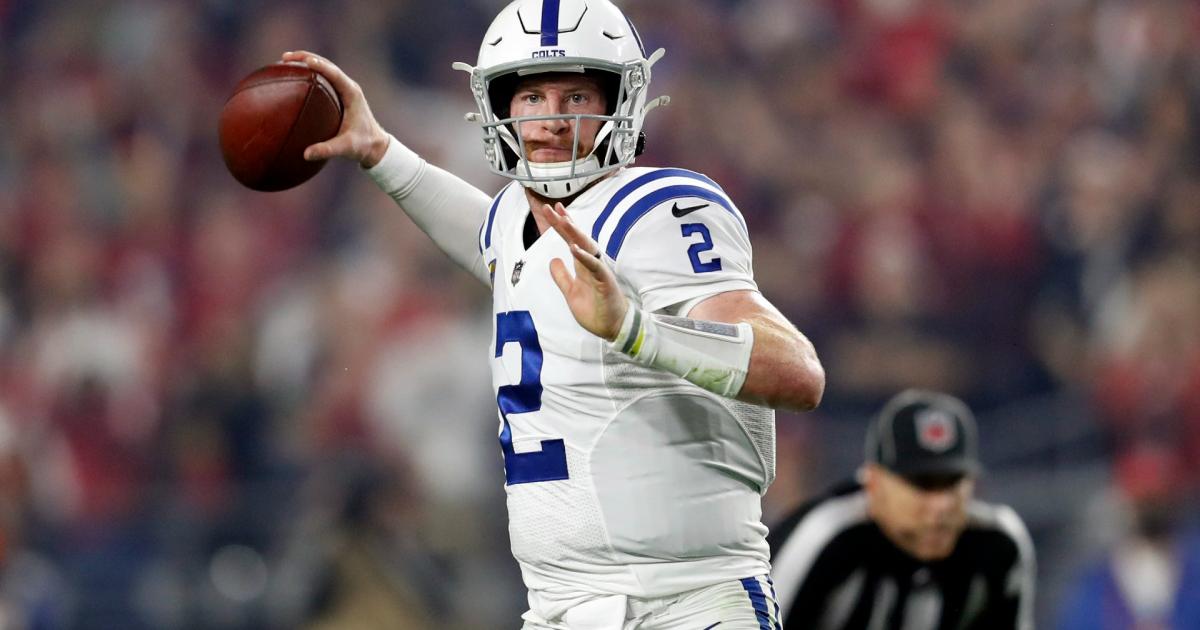 The Commanders may not have won the Russell Wilson sweepstakes, but they have added a veteran quarterback to their team via trade.

ESPN’s Adam Schefter reported Wednesday that Washington had agreed to acquire Carson Wentz from the Colts. Wentz will head to the Commanders in exchange for a couple of mid-round picks and a pick swap.

This marks the second consecutive offseason during which Wentz has been traded after moving from Philadelphia to Indianapolis last year. The 29-year-old will join his third team in as many years and will hope to return to form after a couple of disappointing seasons.

The trade is a calculated gamble for the Commanders. Meanwhile, the Colts are moving on from a player that they believe to be a sunk cost just one year after acquiring him.

Who won the trade? In its immediate aftermath, it’s pretty clear that the AFC side got the better of this deal.

TRADE DETAILS: What the Commanders gave up to get Carson Wentz

This trade is a confusing one for the Commanders. Yes, they missed out on Russell Wilson. Yes, they need a quarterback. The team believes that with better play at the position it will be a playoff contender, and Ron Rivera hasn’t been shy about his desire to add an experienced QB.

“I think this team needs a veteran,” Rivera told CBS Sports in early March. “I really do.”

Wentz checks that box, but is he really enough of an upgrade to get Washington over the hump? He was an MVP candidate in 2017, but his performance over the last two seasons has been uninspired.

Wentz threw a league-high 15 interceptions while completing 57.4 percent of his passes in 2020 with the Eagles. That prompted Philadelphia to move on from him and roll with Jalen Hurts.

Wentz was then reunited with Frank Reich, who was his offensive coordinator during his Pro Bowl season in 2017. There were high hopes that he could bounce back in that arrangement. However, the Colts went just 9-8 with Wentz and failed to make the playoffs. He was largely a below-average quarterback during his lone season in Indy.

Furthermore, it didn’t seem like Reich and the Colts trusted him. The team averaged just 30.6 passing attempts per game, tied for the fifth-fewest in the league, and saw that number drop to 23.6 attempts per game in the Colts’ final five games.

As such, the price that the Commanders paid to get Wentz — two Day 2 picks and a swap of second-round selections in 2022 — seems rather high. Maybe Washington’s coaching staff can work with Wentz and get him to bounce back. However, it seems unlikely given that two teams have given up on him in the last two years.

The silver lining for Washington is that it has control over the Wentz experiment. If he flops in 2022, the Commanders can cut him without any cap penalties in 2023. That’s what keeps this trade from getting a failing grade.

The Colts made a mistake by making their initial trade for Wentz. Now, they have undone it and have, amazingly, managed to recoup most of the draft capital they surrendered in the original deal.

All told, that’s a solid haul for Wentz. He is coming off a mediocre season with the Colts and there was buzz that Indy could release him if it couldn’t find any takers on the trade market. Instead, the Colts will get multiple Day 2 picks for him and will move up five picks in the second round of the 2022 NFL Draft.

Washington is also paying Wentz’s full contract, as ESPN’s Adam Schefter reports, so that will save the Colts money which they can allocate toward finding a new quarterback. Their new stockpile of mid-round draft picks will couple well with that, as they now have extra ammunition to trade for a guy like Jimmy Garoppolo — if they so desire.

Reich and Chris Ballard deserve credit for being willing to admit that they made a bad investment. They are now set to course correct and should have a chance to bring the Colts back to the playoffs if they can find the right fit at quarterback.