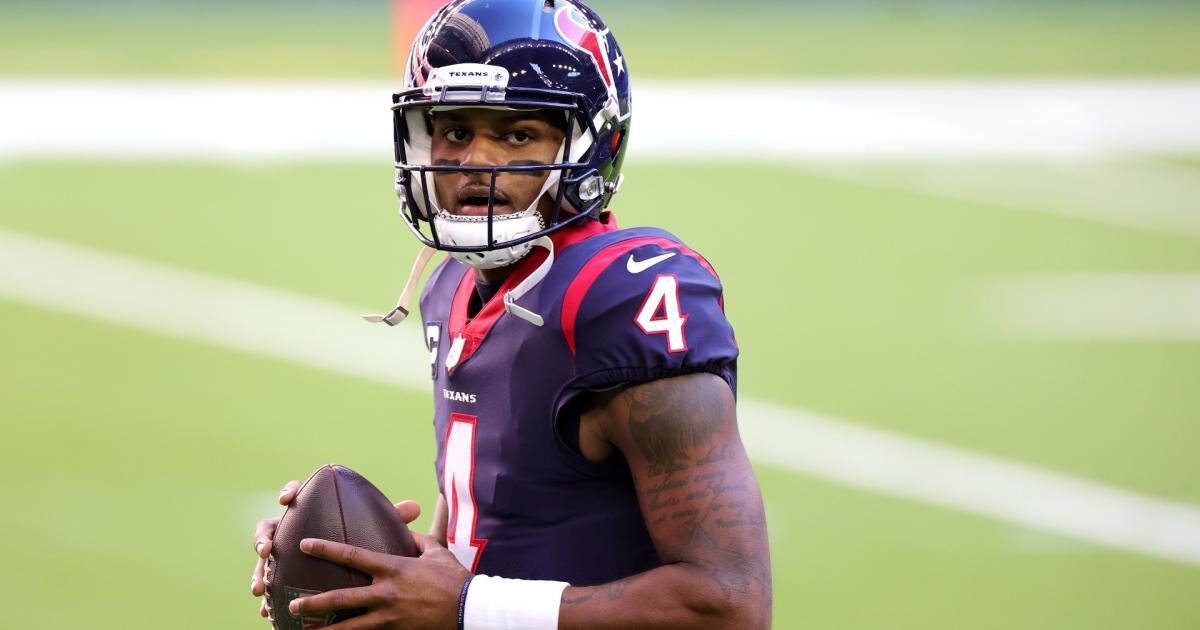 The Deshaun Watson saga will come to a head on Friday.

Watson, who stands accused of sexual assault and sexual misconduct in 22 civil lawsuits and 10 criminal complaints, will have his civil deposition begin on Friday. He plans to assert his Fifth Amendment right to not incriminate himself as a part of that deposition.

Meanwhile, a grand jury will hear evidence involving Watson’s case from several of the women who have filed criminal complaints against him. Watson will not be forced to appear in front of the grand jury. If the jurors choose to indict him, a criminal case will move forward. If they do not, he will not go to trial and will fully focus on the civil cases.

Either way, NFL teams will learn something about Watson’s future on Friday. And if he isn’t indicted, quarterback-needy teams may begin viewing him as a potential trade candidate.

The 2022 NFL quarterback market has already been hot. Both Russell Wilson and Carson Wentz were traded ahead of free agency, and Watson is now the most talented quarterback available via trade. Of course, he comes with a lot of baggage, and numerous teams will be scared off by the sexual assault allegations against him.

However, as we’ve seen time and time again, NFL teams are willing to take chances on talented players even with the heaviest baggage. All it takes is one team desperate for a quarterback to make a trade for Watson happen.

So, if Watson is cleared — a big if — which teams could be interested in him? The list of potential candidates is long on paper, but only a handful stand out as realistic landing spots.

If any team is going to trade for Deshaun Watson, it seems like it would be the Panthers. They have been tied to him since before last year’s trade deadline, and they maintain an interest in him.

According to Jordan Schultz, Watson is “No. 1 on the Panthers’ wish list.” He cites David Tepper’s desire to win after back-to-back five-win seasons as the main reason that Carolina would consider trading for Watson.

That said, it was reported in advance of the 2021 NFL trade deadline that the Panthers were no longer interested in acquiring Watson “due to lack of clarity with his legal situation” and “Watson’s plans with his no-trade clause,” per ESPN.

As such, Carolina may wait for both of those issues — particularly the former — to clear up before making a move. However, if Watson gets a favorable ruling at Friday’s grand jury hearing, the Panthers could quickly pull the trigger on a deal to acquire him.

The Seahawks just kickstarted a rebuild by moving on from Russell Wilson. Would they be willing to reinvest their recently-acquired draft capital to get Watson? Pro Football Network’s Aaron Wilson reports that Seattle is “expected to explore trade scenarios” for Watson.

Certainly, getting Watson would make the Seahawks competitive. He’s the best quarterback remaining on the market and is more of a sure thing than any of the passers that Seattle could get with the No. 9 overall pick it acquired from Denver.

That said, the Seahawks had a decade worth of stability at the quarterback position thanks to Wilson. They probably won’t sink assets into Watson unless they know he can get and stay on the field amid his legal troubles.

MORE: What’s next for the Seahawks after trading Russell Wilson?

If the Steelers got Watson, they would be immediate Super Bowl contenders. They have a strong roster and plenty of offensive weapons at their disposal in Chase Claypool, Diontae Johnson and Pat Freiermuth. They also have $28.8 million in cap space, so they could afford Watson’s contract.

All that said, do the Steelers want Watson? Not according to Gerry Dulac of the Pittsburgh Post-Gazette.

Steelers ARE NOT interested in signing DeShaun Watson, despite what you might be hearing or reading, per team sources.

“I’m highly concerned for our franchise and for Ben personally,” Tomlin said in 2010.

It’s doubtful that Tomlin and Co. would want to go through something similar with Watson, especially given the 22 civil lawsuits and 10 criminal complaints he is facing. Perhaps that will change if the grand jury dismisses the criminal charges against him, but for now, the Steelers seem more likely to target Malik Willis or another quarterback prospect in the 2022 NFL Draft.

Watson looks like a fit for the Colts on paper, but they are highly unlikely to land him. There are two reasons for this.

That said, the bigger issue at hand is that the Colts play in the same division as the Texans. Houston won’t want to trade him within the division and risk having to face Watson twice a year for the next decade-plus — unless they can get Indianapolis to overpay for him.

The Colts won’t want to do that, especially amid all of Watson’s legal issues. So, barring a surprise agreement between divisional rivals, Watson will not be playing for Indianapolis next year.

Tom Brady has retired, so the only quarterback that the Buccaneers have under contract is Kyle Trask, a second-year player who has never seen action in an NFL game. They have a win-now roster, so naturally, they’d be a fit for Watson, right?

Well, there are some problems with that. First, they are $10 million over the salary cap, so they would have a tough time fitting Watson under the cap.

Second, it doesn’t seem like Bruce Arians believes that the Buccaneers would agree to trade for a quarterback. He explained that agreeing on a quarterback trade is a difficult process at the 2022 NFL Combine, per PewterReport.com.

“Trades are just out of the question,” Arians said. “You have to have a partner. These guys aren’t just willing and calling. ‘Hey you want my guy?’ Who is behind door No. 2 for them? So I don’t see very many of these guys moving. There might be one. Max two. Guys that we think could take us to the Super Bowl. I like about eight of them. But they’re all playing for somebody else. I don’t see teams giving up quarterbacks.”

Given the Bucs’ salary cap issues, Watson’s legal problems and Arians’ comments, it’s hard to imagine him making his way to Tampa Bay. Maybe they could pull off a miracle but as it stands, this seems like even more of a longshot than Watson going to the Colts. Too many things would have to come together to make it happen.