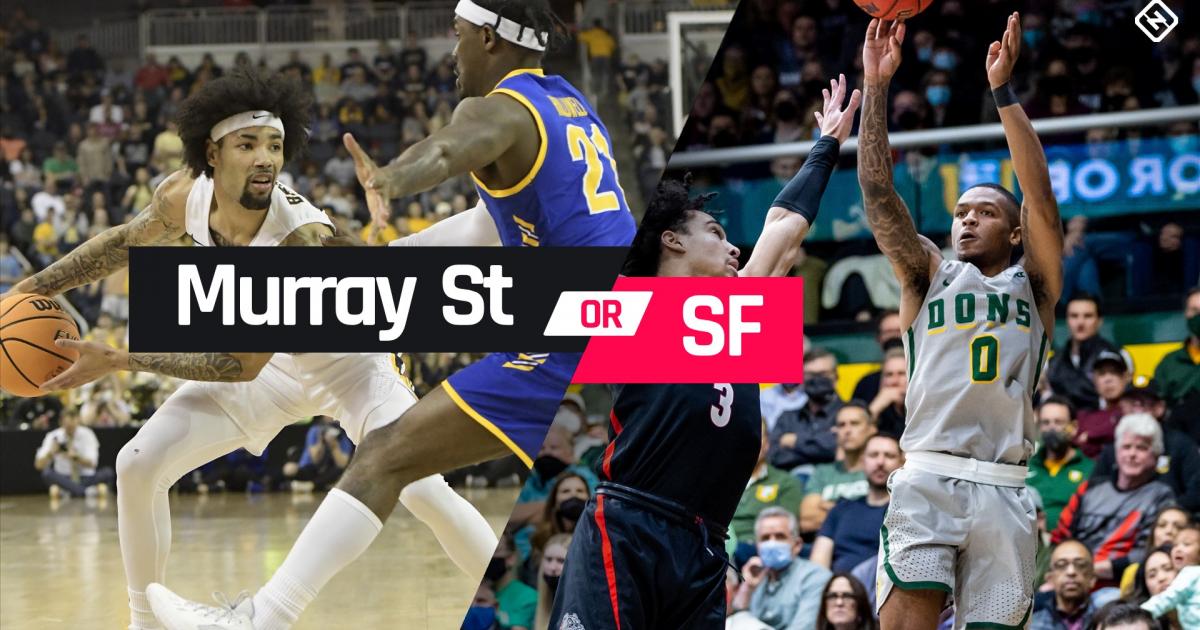 One of the most interesting matchups of this year’s March Madness is occurring in the East bracket, with No. 7 Murray State taking on No. 10 San Francisco. It’s a mid-major matchup that will have a lot of people closing their eyes and picking a team, so here’s how the two stack up.

Murray State is going against the San Francisco Dons, who finished fourth in the West Coast during the regular season and lost their conference semi-final to No. 1 overall Gonzaga. The Dons were a darling of tournament projectors, and are looking to upend a Murray State team that has been streaking all season long.

The winner of this game will have the dubious honor of likely playing Kentucky in the second round, but of course, it’s one game at a time.

Here’s what you need to know heading into the No. 7 and No. 10 matchup between these two mid-major programs.

Murray State and San Francisco is the 14th game tipping off this tournament, starting at 9:40 p.m. on CBS. Per FanDuel, San Francisco is a favorite to win the game, but the spread is at -1.5. Which is to say, according to Vegas, the game is basically a coin flip heading into it. Here are the details of the game.

Murray State was untouchable in conference play this year and had an utterly dominant season, rarely being challenged once Ohio Valley play started. The Racers didn’t live up to their name this season. They played a strong half-court game. Murray State was 240th in the country in possessions per game, a measurement of pace.

Murray State, however, averaged 79.3 points per game, good for 17th in the country.

The Racers didn’t have signature wins this season, and lost by 13 against Auburn. But their consistency is laudable, and they deserved to be ranked by the end of the season as they were.

On the other side, the San Francisco Dons were a bubble team for much of the season. They lost to Gonzaga in their conference championship, losing their automatic bid in the process, but got an at-large bid for the No. 10 seed. A win over BYU helped to bolster San Francisco’s resume, but ultimately it appeared the Dons did more than enough to get into postseason play based on their seeding.

This will be San Francisco’s first tournament berth since 1998, so it’s hard to know what to expect. But it’s a team with a lot of confidence that shines through in its play.

While San Francisco is favored as a No. 10 seed, this game could go either way. It’s hard to project two teams closer together in the tournament.

Murray State has been led by star K.J. Williams, who is averaging 18.2 points per game alongside over 8 rebounds per game. Tevin Brown has established himself as a second option for the Racers, who has had a strong all-around statline, even if it’s less eye-popping than Williams’.

For San Francisco, all eyes will be on guard Jamaree Bouyea, who is averaging just under 17 points per game. Bouyea’s name has been appearing in some mock drafts as a second-round option for teams, and the senior may be primed to have a big tournament.

No. 7 Murray State vs. No. 10 San Francisco prediction

To be blunt, this game is almost impossible to predict. While Murray State has been streaking all season and has won 20 straight games, the strength of schedule just hasn’t been there. San Francisco played the likes of Gonzaga tough this year, whereas Murray State struggled when it faced a team like Auburn.

While that can’t be taken as strictly predictive, San Francisco is getting the edge in this game because it has shown more against top-tier competition.

Keep in mind, these are two teams in the top 25 in NET in the country. This isn’t just a mid-major matchup. It’s a matchup between two legitimately very good teams.

San Francisco gets the edge here because they’re balanced. They’ll guard the perimeter well and they’ll take a lot of threes themselves. But regardless, expect this game to go right down to the wire.

No. 10 is 57-87 against No. 7 seeds, making this a popular upset pick for many people that doesn’t always pay off. 10 seeds beat 7 seeds about as often as 11 seeds beat 6 seeds, but San Francisco is primed to be one of the exceptions. While it isn’t common, it’s hardly unheard of.