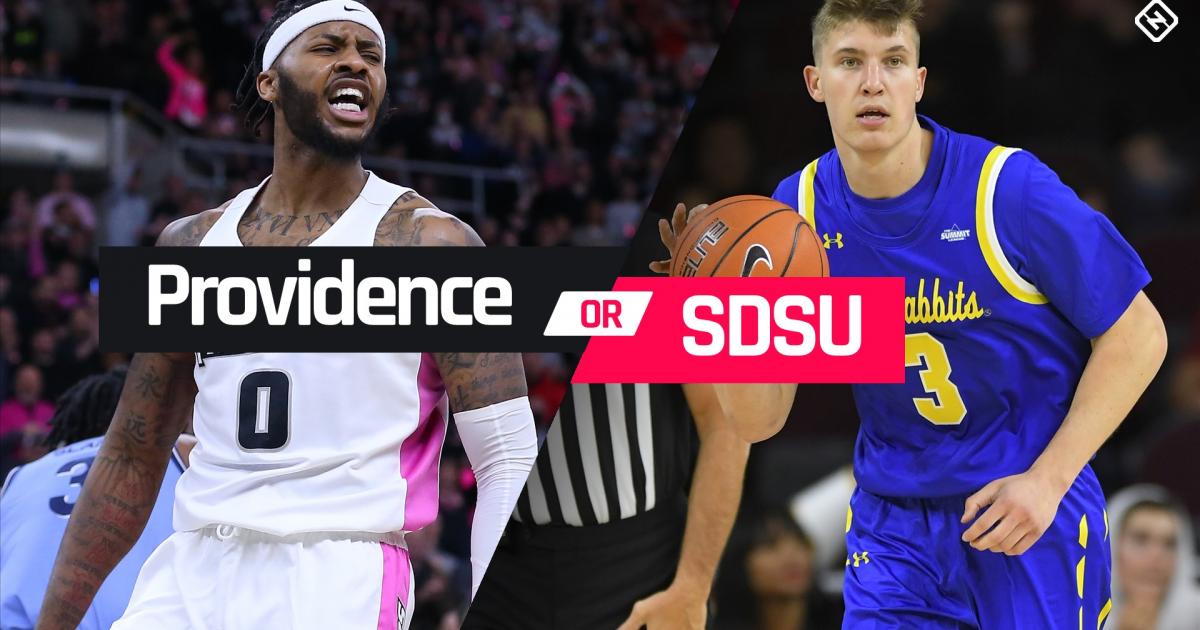 Every year when the March Madness bracket is revealed, there are a few matchups that immediately put some top-seeded teams on upset watch.

Four-seeded Providence versus 13-seeded South Dakota State is one of those matchups.

South Dakota State was a powerhouse in The Summit this year, going a perfect 18-0 in conference play. The Jackrabbits finished with a remarkable 30-4 record on the season with their last loss coming all the way back on Dec. 15. They are currently riding a 21-game win streak, including their run all the way to winning The Summit title.

Providence is not an easy opponent, though. The Friars went 11-1 in non-conference play to get the ball rolling, then went on to win the Big East regular season title. They finished 14-3 in league play and 25-5 overall, picking up several ranked victories over Big East foes, but fell to Creighton in the semifinals of the conference tournament.

Will South Dakota State keep their win streak going and pull off the upset? We have you covered with all the information you need to make a decision below.

Providence vs. South Dakota State will take place on Thursday, March 17 in Buffalo, New York. According to Sports Interaction, Providence is favored to win this matchup. Below are the details of their game, including the betting odds, time, TV and venue.

Providence won 10 out of their first 11 games of the season and never tailed off once conference play rolled around. Picking up big non-conference wins over teams like Wisconsin and Texas Tech, the Friars were battle-tested heading into their Big East schedule. They started 11-1 against Big East opponents, including ranked wins over UConn (No. 20), Seton Hall (No. 15), Xavier (No. 21) and Marquette (No. 22). They finished with a 14-3 record to earn the Big East regular season title, but came up short in the conference tournament, falling to Creighton in blowout fashion, 85-58, in the semifinals.

South Dakota State just might be the hottest team in the country coming into March Madness. The Jackrabbits are on a blazing 21-game win streak, lasting from Dec. 20 all the way through to when they won The Summit conference tournament on March 8. They haven’t lost a game since Dec. 15 when they fell to Missouri State. Since then, they have only played in four (!) games that were decided by five points or fewer, handling any team in front of them. While playing in a mid-major conference damages their NET and KenPom rankings, the Jackrabbits are a threat as a 13 seed.

While NET and KenPom rankings would lead you to Providence, the two-point spread between these teams tells you all you need to know about how close this matchup could be.

The major difference-maker in this one will be defense. The Friars will have to lock in on that end of the floor because South Dakota State’s 86.7 points per game ranks third in the nation. However, the Jackrabbits are often involved in shootouts, as they allow 73.4 points per game.

Providence’s size inside with senior center Watson poses a threat for a smaller South Dakota State team that often runs with a perimeter-oriented lineup, but the Friars will also have to keep up with the Jackrabbits’ perimeter shooting. South Dakota State knocks down nearly 10 3s per game, which places them in the top 25 in the country.

Even though the Jackrabbits are on fire, I like Providence’s experienced upperclassmen roster, led by Big East Coach of the Year Ed Cooley, to hold off a team hungry for an upset.

For more insight on this and every matchup, check out the TeamRankings Predictor Tool below. TeamRankings subscribers also receive access to customized, data-driven picks for their bracket pools.

History of 4 vs. 13 matchups in NCAA Tournament

No. 4 seeds have historically handled No. 13 seeds with a 113-31 record against the underdogs.

Below, you can find the recent history of a 13-over-4 upset in the NCAA Tournament.