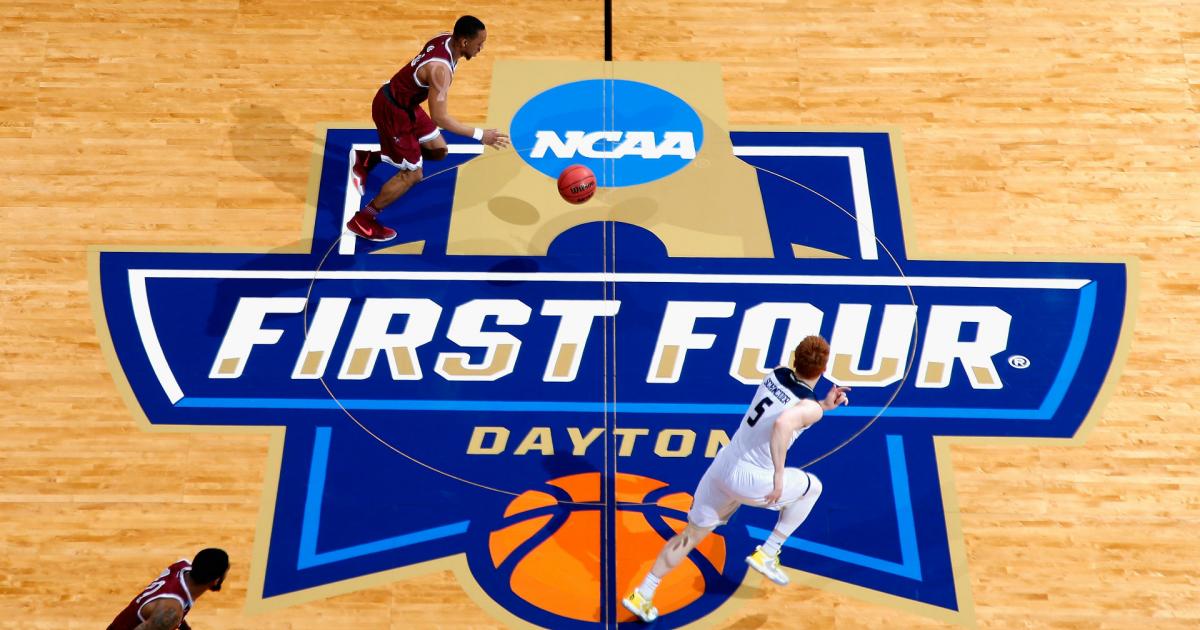 When Selection Sunday comes to a conclusion and the new March Madness bracket is set, what is the first thing you do when you go to fill yours out?

You probably scan each region, trying to see which top team in the country has the easiest path to make a run to win the title. Then, you’ll go matchup-by-matchup, starting with the Round of 64, picking winners all the way through to the national championship game.

But there’s a caveat – at first look, not every matchup in the Round of 64 is filled out.

Since the NCAA expanded the tournament to 68 teams in 2011, there are always the “First Four” games played in Dayton, Ohio, on Tuesday and Wednesday, marking the official start of March Madness.

On your bracket, it will look something like “11. Rutgers/Notre Dame”, and it’s easy to overlook these games for a couple of reasons:

One, because most bracket pools don’t make you pick a winner (or award points) for each First Four game. The deadline to get your bracket filled out isn’t usually until the Round of 64 begins, so you can make changes based on the results of the First Four.

And two, because it always feels like the tournament doesn’t actually start until the first Thursday where you set up as many screens as possible in your living room or office to make sure you don’t miss a dribble.

My advice: do not overlook those First Four games when you’re filling out your bracket.

The matchups between 16 seeds are historically a one-game feel-good story for a low- or mid-major team to get an official NCAA Tournament win in their record books before getting trounced by a one seed in the Round of 64.

The other First Four teams (typically an 11, 12 or 13 seed) who advance to the Round of 64, however, have seen plenty of success despite having to turn around after an extra game and travel again to face a higher, rested seed.

The First Four got off to one heck of an inaugural start when VCU – led by energetic head coach Shaka Smart and an upperclassman-heavy roster with tournament breakout stars like Joey Rodriguez, Bradford Burgess and Jamie Skeen – made a Cinderella run to the Final Four, becoming just the third 11-seed in NCAA history to reach the semifinal round.

The First Four magic continued in 2013 when La Salle made a run to the Sweet 16 after pulling off upset wins over Kansas State and Ole Miss. Who could forget Tyrone Garland’s gem of a postgame interview after his game-winning “Southwest Philly Floater” beat the Rebels in the Round of 32?

The following year, in 2014, Tennessee also made a run to the Sweet 16, knocking off six-seed UMass in the Round of 64 before taking advantage of a fortuitous opportunity. Three-seed Duke, led by future No. 2 overall NBA Draft pick Jabari Parker, was upset by 14-seed Mercer, paving a path for the Volunteers to keep the First Four mojo going.

In the three ensuing years, Dayton, Wichita State and USC, respectively, all advanced out of the Round of 64, but each of their tournament runs came up short in the Round of 32.

The next deep run from a First Four team didn’t come until 2018, when head coach Jim Boeheim’s patented 2-3 zone defense had Syracuse suffocating opponents all the way to the Sweet 16. They held each of their first three tournament matchups under 60 points – including an upset win over a Michigan State team loaded with NBA prospects like Jaren Jackson Jr. and Miles Bridges in the Round of 32 – before being knocked off by Duke in the next round.

The first year a First Four team didn’t advance past the Round of 64 was 2019, but after a one-year tournament hiatus due to COVID-19 in 2020, the First Four momentum came back in a big way.

Just last year, UCLA trailed Michigan State by as many as 14 points in their First Four matchup before making a roaring push in the second half. Behind big-time shot-making from sophomores Johnny Juzang and Jaime Jaquez Jr. – something that became a trend during the 2021 tournament – the Bruins pulled off a comeback win in overtime, kickstarting an unexpected run to become the second team in tournament history to go from the First Four to the Final Four.

And they were this close to being the first team to ever go from the First Four to the national championship game, too.

SUGGS AT THE BUZZER

Freshman Jalen Suggs hits the game-winner as @zagmbb is heading to the #NationalChampionship in one of the greatest #FinalFour games you will ever see!#UnitedWeZag pic.twitter.com/Ip2y5dXn1H

Earning a win in the First Four has proven to be a way for teams to shake off the nerves of playing on the March Madness stage, giving underdogs all of the momentum they need to play spoiler in pulling off bracket-busting upsets.

Which First Four team will put on the glass slipper this year? History tells us it’s bound to happen to one of them.