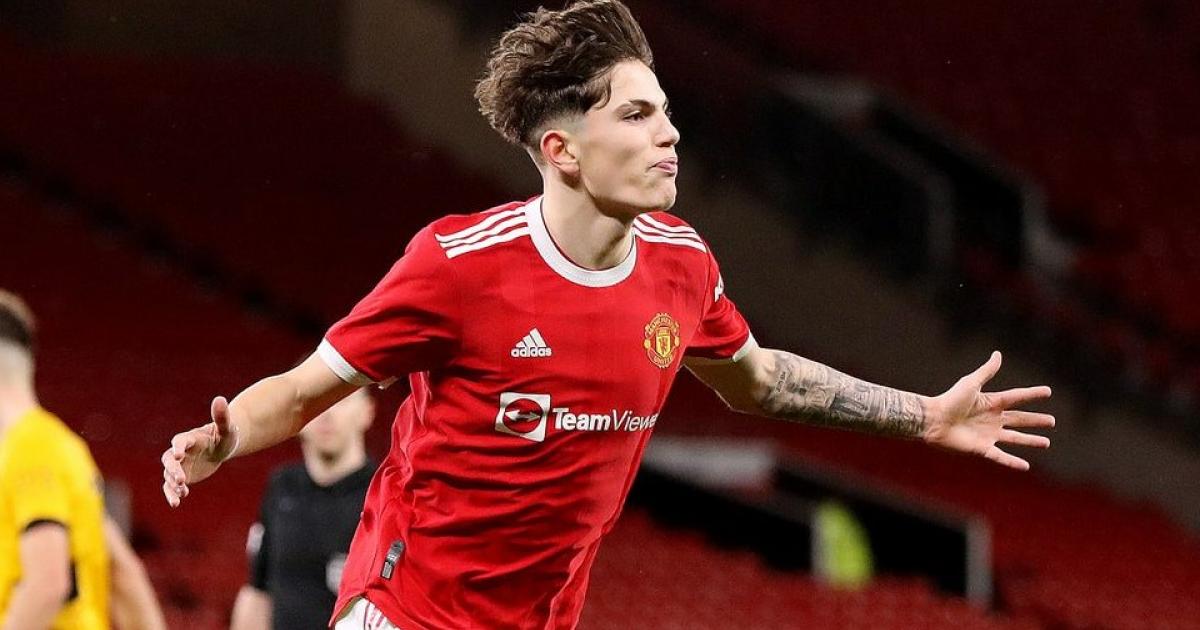 Manchester United will be looking to win the FA Youth Cup for the 11th time when they take on Nottingham Forest in the final at Old Trafford.

Over 60,000 tickets have been sold for the game, which means that the attendance record for an FA Youth Cup fixture is set to be broken. The previous record was 38,137 for United’s game away to Arsenal in 2007.

There are some hugely talented players in this United Under-18s squad, with hopes high at the club that some of the prospects will eventually be able to push into the senior set-up on a regular basis.

MORE: What is the FA Youth Cup and who is playing in the final?

Here’s a look at the key players to watch out for at United.

A Czech Republic youth international, Vitek joined United from Sigma Olomouc in 2020 and has this season been number one in the Youth Cup and the UEFA Youth League. He has already featured for the U23s, and is known for his impressive reflexes.

Spanish defender Jurado was previously at Barcelona and has progressed well at United, playing prominently for the U23s. Jurado’s positional awareness is of a high standard and he doesn’t lack for pace, with coach Travis Binnion having used him in midfield as well as at the back.

A defender who has been called up by England at U17 level, Fredricson has played every minute of United’s Youth Cup campaign. Fredricson, who grew up in south Manchester, has been earmarked for regular involvement with the U23s next season.

The captain of United’s Youth Cup team, Bennett has excellent leadership qualities and is an astute reader of the game. He helped United to keep a clean sheet in their semi-final success against Wolves. Speaking ahead of playing a final at home, he said to United media: “Every single time you do you’ve got to just embrace it, go and give your all and hopefully keep working hard to play as many games at Old Trafford as possible. I love it every time I step out.”

Murray was previously at Huddersfield Town’s academy before it was closed, after which United brought him into their set-up. He relishes pushing forward from left-back to join the attack, and nobody at this age group has played more often for the club this season.

England U18 international Gore signed for United from Burnley in 2018. He has been booked three times in the Youth Cup this season but has shown his creative qualities and scored in the competition last season against Salford City — the team run by former United academy products Gary Neville and Phil Neville, Paul Scholes and Ryan Giggs — when he was still a schoolboy. He also starred in United’s impressive comeback from 4-1 down to draw 5-5 with Liverpool.

Capped by England at U17 level but also eligible to play for Ghana, Mainoo has been one of the standout performers for United in this season’s Youth Cup campaign. Capable of playing in a deep-lying midfield position or further forward, he scored against Reading and Everton, while he provided an assist against Leicester City. He has made a big impression at the club after only joining last year.

A winger who has been operating on the right flank during this Youth Cup run, he found the net against Scunthorpe United, Reading and Everton and he has also weighed in with two assists. He has played for the U23s and has featured in the Papa John’s Trophy.

Norway youth international Hansen-Aaroen signed for United from Tromso last year. He made seven appearances for Tromso’s first-team and became the youngest player in their history at 15 years and 323 days old. The midfielder is a fine passer and has been compared to Andres Iniesta.

The most high-profile player in this United side, Garnacho made his senior debut when he featured as a late substitute against Chelsea in the Premier League recently. The 17-year-old was born in Spain but has been called up by Argentina at senior level. He was at Atletico Madrid prior to joining United in 2020. This season, the skilful youngster has made a major impact for United at various age levels.

The highly regarded striker has had quite an eventful career already. He was previously at Liverpool’s academy before being signed by United and he then got snapped up by Manchester City before United re-signed him for around £750,000. He has scored five goals in as many Youth Cup appearances this season, while in total he has 34 goals in 34 games for the U18s since the start of last season.

This Is Us Round Table: What Did You Think of Rebecca’s Final Journey?
Daredevil Series in the Works at Disney+
How much prize money do the Premier League winners make? Full list of position prizes
Simone Biles Steps Out in Vibrant Orange During Date Night With Her Fiancé
Who will win the PGA Championship in 2022? Odds, betting favorites, expert picks & more to know