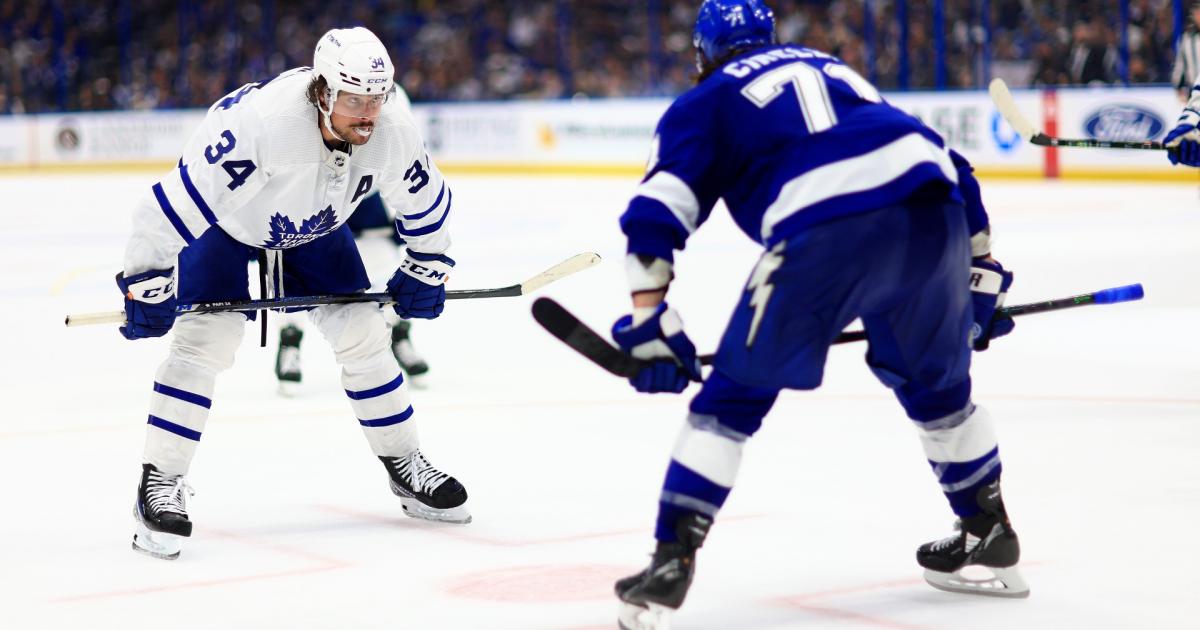 Maple Leafs. Lightning. Game 7, Saturday night. What more can you ask for?

Toronto and Tampa Bay wrap up their first-round series with Game 7 at Scotiabank Arena. The Lightning forced a deciding game in the series after winning Game 6 on Thursday, thanks to Brayden Point’s OT goal.

The Maple Leafs are looking to close out their first playoff series win since 2014. They have lost four straight Game 7s and five consecutive winner-take-all contests and are 0-9 in series-clinching games since 2013.

All of the fear can be wiped away with a victory at home. This feels like a different Maple Leafs team, one that can make a legitimate run at a Cup if it can get past the defending back-to-back champions.

In their way is a Lightning team that may not feel as dominant as it was the last two seasons but is still dangerous and can steal a series. Tampa Bay is aiming to become the first team since the Islanders in the 1980s to win three consecutive Stanley Cups.

“I don’t want anybody to sit here and say ‘Well, is it easier because we won two Cups if the Leafs get the best of us tonight? It’s OK?’ That’s BS,” coach Jon Cooper said of the Lightning’s mindset heading into Game 7. “We’re standing here on the cusp of greatness and why the hell wouldn’t we charge through that door?”

The fate of these two teams will be decided Saturday night. Will the Maple Leafs finally get that elusive series-clinching win, or will the Lightning send Toronto home early yet again?

7:37 p.m.: Multiple “Sooouuuuuppp” chants ring out at Scotiabank Arena. Two stop by Campbell on Steven Stamkos back to back, then stopping two shots from Victor Hedman at the point. Back to 5 on 5.

7:33 p.m.: Penalty to Mark Giordano for delay of game. Alex Killorn tries to dump the puck in ad Giordano deflects it up and over the glass. Power play upcoming for Tampa.

7:30 p.m.: Brandon Hagel heads off for tripping Kerfoot. Leafs get the first power play of the night. 4-for-25 on the power play this series.

7:24 p.m.: Not a ton of scoring chances, but John Tavares with the best chance thus far. Lightning turnover down low in their own zone and Alexander Kerfoot feeds Tavares in front, but pad save by Vasilevskiy.

7 p.m.: Starting lines for each side.

6:30 p.m.: As anticipated, it will be Andrei Vasilevskiy in net for the Lightning, Jack Campbell for the Maple Leafs. Neither goalie has been particularly stellar in the series, but one strong performance in Game 7 could be all that’s needed.

What channel is Lightning vs. Maple Leafs Game 7 on?

Lightning vs. Maple Leafs Game 7 will air on TNT in the United States. In Canada, the game will air on Sportsnet and CBC in English and TVA Sports in French.

Viewers in the U.S. can stream every NHL playoff game live on Sling TV. With the Sling Orange Sports Extra package, they get $10 off their first month with access to ESPN, ESPN2, ESPN3 and TNT. NHL playoff games on ABC are simulcast on ESPN3, which is included with Sling Orange, available for $35 per month ($25 the first month for new subscribers).

Game 7 of the Lightning vs. Maple Leafs series will start shortly after 7 p.m. ET on Saturday, May 14. The game will be played at Scotiabank Arena in Toronto.

How Saints’ signing of Jarvis Landry completes a needed overhaul of receiving corps
The Conners Season 4 Episode 20 Review: A Judge and A Priest Walk Into A Living Room…
100 Summer Street Style Looks That Will Give You Inspo For Days
12 Summer Dresses That Are Cool, Comfy, and Perfect For the Office
Billy the Kid Season 1 Episode 4 Review: Interlude