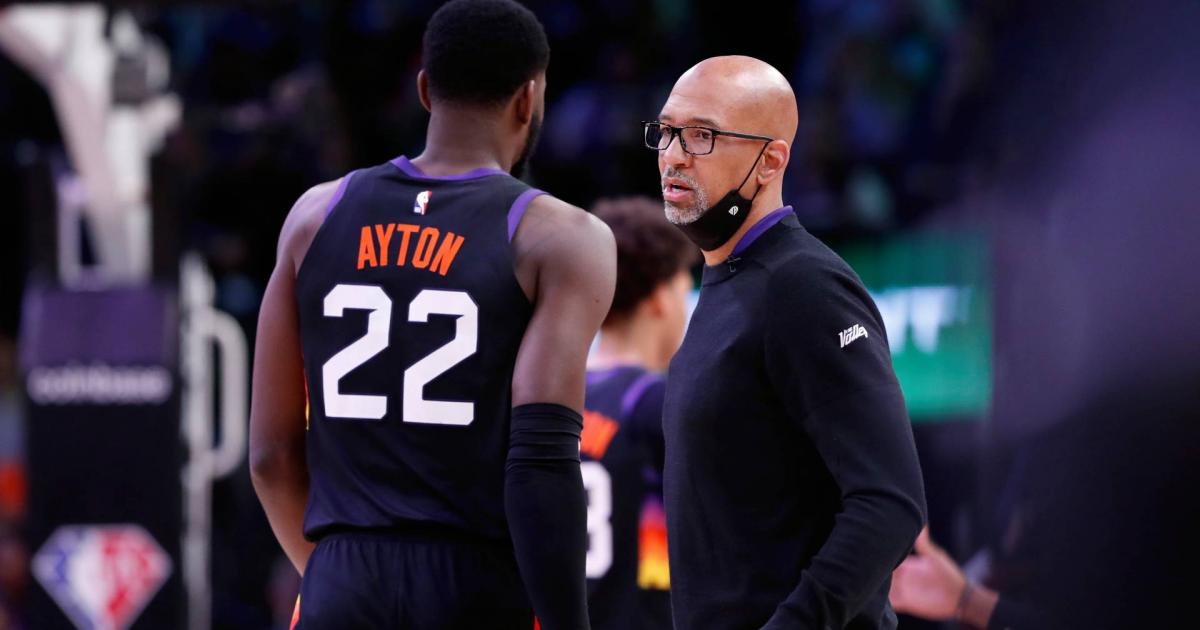 Deandre Ayton and the Suns saw their title aspirations come crashing down in Game 7 of the Western Conference Semifinals as they were on the wrong end of a historic rout by the Mavericks.

On a night where the Suns trailed by as many as 46 points, Ayton was limited to just 17 minutes of action, the lowest of any Suns starter. Ayton was not in foul trouble, so him seeing limited time in a closeout game only made matters worse for the Suns — the situation has opened a new dialogue surrounding the former No. 1 overall pick’s future with the franchise.

If it wasn’t because of fouls, why did Ayton play so little in Phoenix’s final game of the season? When Suns head coach Monty Williams was asked about the situation postgame, he was brief in his answer.

Ayton declined to speak with the media postgame.

A firsthand account from Suns superfan Mr. ORNG states that after Ayton was subbed out early in the third quarter, he and Williams engaged in a verbal confrontation, causing two coaches to step in and intervene.

MORE: What is Chris Paul’s legacy after blowout loss to Mavericks?

Ayton was pulled less than 20 seconds after a play in which he failed to close out on Jalen Brunson, who hit a corner 3 to put the Mavericks up by 39 points. He would sit for the remaining 20 minutes and 46 seconds of game time.

If Ayton’s benching was a byproduct of internal tension, what does that mean for his future with the franchise?

Ayton, who was selected first overall in the 2018 NBA Draft, became eligible to sign a contract extension with the Suns in 2021.

After playing a large role in the Suns run to the 2021 NBA Finals, Ayton was living up to the billing of a former No. 1 overall pick. As a result, he and his representation reportedly sought a maximum rookie contract extension for five years and over $170 million.

According to ESPN’s Adrian Wojnarowski, the Suns’ reluctance to offer Ayton the max caused negotiations to stall, and the two parties failed to reach an agreement by the Oct. 18 deadline, though the Suns did sign Mikal Bridges (four years, $90 million) and Landry Shamet (four years, $43 million) to contract extensions.

At Suns shootaround shortly after the deadline, the 6-foot-11 Ayton was spotted wearing the practice jersey of 6-foot-4 teammate Elfrid Payton, with many speculating that he donned “Payton” to signify “pay Ayton.”

The man of the hour Deandre Ayton pic.twitter.com/CehNFFo8fC

Because Ayton did not reach an agreement with the Suns by the extension deadline, he now enters the 2022 offseason as a restricted free agent, meaning he is free to sign an offer sheet with any team, but the Suns have the right to match the deal.

There is an alternative timeline in which Ayton could sign a $16.4 million qualifying offer for the 2022-23 season to enter unrestricted free agency in 2023, but it would be a risky move that is largely unprecedented.

On Monday, Wojnarowski reported that the relationship between Ayton and the Suns is up in the air, with the big man sure to attract plenty of interest in free agency.

“Deandre Ayton did not feel valued by this Phoenix organization,” Woj said. “[He] is going to get a max contract in the marketplace, somewhere….There are a lot of teams lining up to figure out ‘how can we acquire him?'”

When asked about Ayton’s contract situation following Game 7, an answer from Devin Booker added more fuel to the flame that Ayton’s days in Phoenix could be numbered.

“His contract situation is between him and the front office. I care about him as a brother. Just making sure his mental is right…whatever happens, happens. Kind of hard to look so far in the future.” – Devin Booker on Deandre Ayton’s contract situation

With the NBA reverting back to its normal calendar, free agency is not “so far in the future,” as negotiations will likely begin on June 30 or July 1, roughly six weeks after the Suns’ Game 7 loss to the Mavericks.

After earning $12.6 million on the fourth year of his rookie deal, Ayton, who turns 24 in July, is set to become a restricted free agent in 2022.

The maximum rookie-scale extension that Ayton can sign is for five years and roughly $172.5 million. Ayton’s restricted free agency gives the Suns leverage in negotiations, but if his time in Phoenix is set to come to an end soon, it could facilitate a sign-and-trade with a suitor in search of a center.