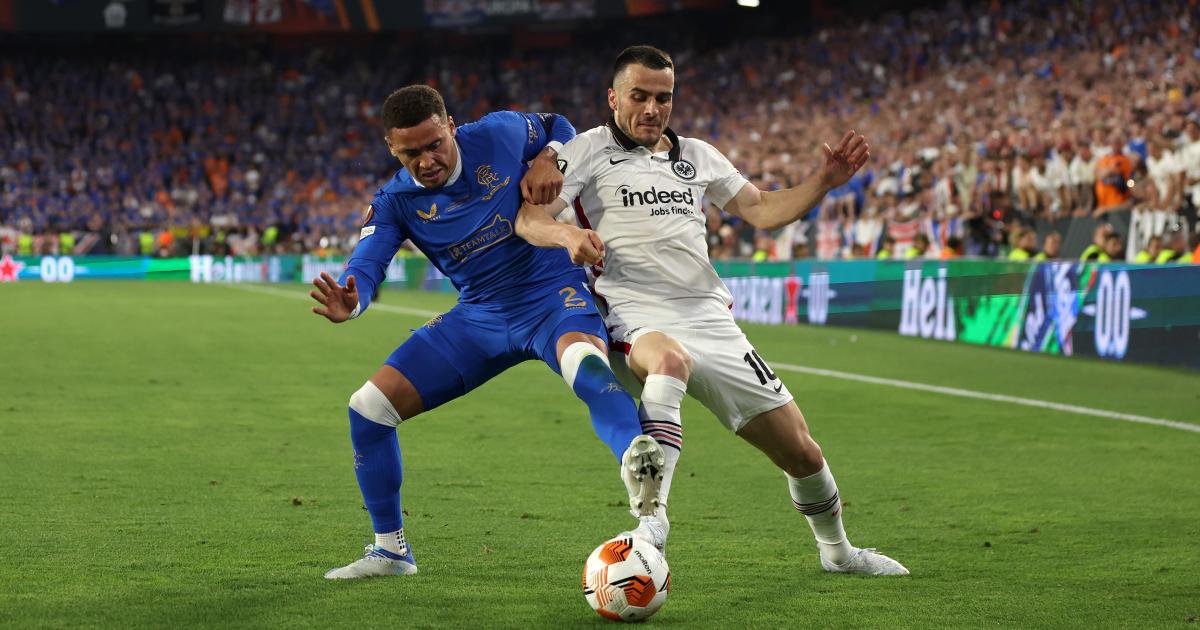 Rangers suffered penalty shoot-out heartbreak as Eintracht Frankfurt prevailed 5-4 on penalties in the Europa League final after a tense 1-1 draw in Seville.

Giovanni van Bronckhorst’s men were second-best early on but gained a foothold in the game and hit the front in the 57th-minute when Joe Aribo capitalised upon Tuta’s slip.

The lead only lasted 12 minutes as Rafael Borre netted from close range and the Colombia international held his nerve to fire Eintracht’s final penalty into the top corner after Kevin Trapp saved Rangers’ fourth from substitute Aaron Ramsey.

A lot unfolded at the Ramon Sanchez Pizjuan to get us to those moments of unbearable tension. Here is how the 2022 Europa League final was won and lost.

Kostic comes out on top in Tavernier battle

In some quarters, the game was billed as a showdown between two phenomenal wide defenders placed in direct competition with one another. To describe James Tavernier as Rangers’ right-back and Filip Kostic as Eintracht’s left wing-back does little to highlight the importance of two men who are the most dangerous creative outlets for their respective sides. Each concluded the night by scoring in a high-quality shoot-out

Tavernier, with seven goals and two assists to his name en route to Seville, and Kostic, three goals and as many assists, appeared to struggle with top billing early on. The Rangers captain booted his first cross of the evening out for a throw-in on the full, while Kostic cut in-field hesitantly in the 11th minute to be easily dispossessed by Scott Wright.

Shortly after he fired a speculative long-range effort into the side-netting, Kostic pounced on a loose Tavernier header and raced 70 yards up the field, only to drag his resulting shot wastefully wide when he had passing options to his right.

Rafael Borré breaks free in the Rangers area to slam the ball past Allan McGregor!

Nothing the veteran stopper could do about that one. #UELfinal pic.twitter.com/apPKKAe0ul

Tavernier’s radar was unusually awry from a 39th minute free-kick and he was fortunate not to be booked for pulling back Jesper Lindstrom. He began the second half more encouragingly, first making an important near-post clearance as Eintracht attacked the end where their supporters were congregated with gusto and then landing a blow on Kostic by skipping past him to create the chance where Ryan Kent sliced wide at the far post.

Kostic supplied a typically dead-eyed delivery when Borre levelled the scores, his low cross skipping beyond a helpless Tavernier. However, certainly from Frankfurt’s point of view, there was another man having a far more telling and unwelcome influence upon proceedings.

Should John Lundstram have been sent off?

As seems to be the current trend in major finals, referee Slavko Vincic was determined to let the game flow and incredibly reluctant to hand out cards of any colours. This approach certainly worked in John Lundstram’s favour early in the piece when the Rangers midfielder met Sebastian Rode’s head with his studs.

Lundstram could argue that Eintracht’s captain ducked into the challenge and the ball was there to be won, with the blood streaming from his wound an unfortunate and unintended consequence. There was certainly no malice in the challenge and, to that end alone, a red card would have felt a little harsh. At the same, the former Sheffield United midfielder would have been able to have few complaints as it was demonstrably dangerous play, and Vincic’s refusal to even dish out a yellow card was bizarre.

A lively start from John Lundstram… 😳

After half-time, when the score was still 0-0, Borre went down under a challenge from Connor Goldson. Again Vincic was unmoved and the decision went to a VAR check. The replays showed not insignificant contact but the on-field decision was upheld and Rangers got away with one. Arguably, Eintracht’s collective lack of composure in the aftermath of that decision played a part in their ragged defending for Aribo’s breakthrough strike.

What is Rafael Borre’s record in major finals?

For all the collective attacking prowess Eintracht showed on the counter-attack during their impressive quarter-final and semi-final wins over Barcelona and West Ham, there were still concerns voiced over the team’s lack of a clinical edge.

However, a closer inspection of the scoresheets showed there was really no need to worry. Rafael Borre smashed in a stunning long-range strike at Camp Nou and scored the only goal of the 1-0 second-leg win against David Moyes’ men.

Borre’s 11 goals and six assists in all competitions during his debut campaign in the Bundesliga were a solid enough return, but the Colombia international really has a habit of turning it on for the big occasion. He scored in the last-16, quarter-finals and semi-finals when River Plate beat bitter rivals Boca Juniors in a seismic 2018 Copa Libertadores final.

He was on target in the quarters, semis and final the following year before River suffered late heartbreak against Flamengo. So there was a certain inevitability when he stole in front of Calvin Bassey to poach the equaliser.

Borre led the line tirelessly, his smart link-up play to the fore as he contested a team-high 21 duels, and his battle with the excellent Bassey during extra time was compelling as others wilted amid the sapping Seville heat. He was the perfect man to have the final word.

Eintracht goalkeeper Trapp was his team’s hero in the penalty shoot-out and was solely responsible for the game getting that far. In the 118th minute, Rangers substitute Kemar Roofe broke clear down the right channel and crossed to the back post.

The on-rushing Kent looked certain to score from four yards but a scampering Trapp brilliantly diverted his attempt with his boot. It was a save that will define the Germany international’s career — the moment that will be replayed in every montage when he retires and at Eintracht 2022 reunion events decades from now.

The 31-year-old had to bide his time during the shoot-out, as he and Rangers veteran Allan McGregor were faced with strikes of a stunning calibre from 12 yards. The exception was Ramsey’s and Trapp was alert to use his legs once more and make another decisive save.

Sonny Barger Dies; Sons of Anarchy Actor and Hells Angels Founder Was 83
This Never-Before-Seen The Office Moment Is Michael Scott at His Best
Animal Kingdom Review: Beginning of the End
14 Styles We’re Shopping From Free People’s Major Fourth of July Sale
These 16 Skorts Will Be Trending All Summer Long: Free People, Lululemon, Alo, and More