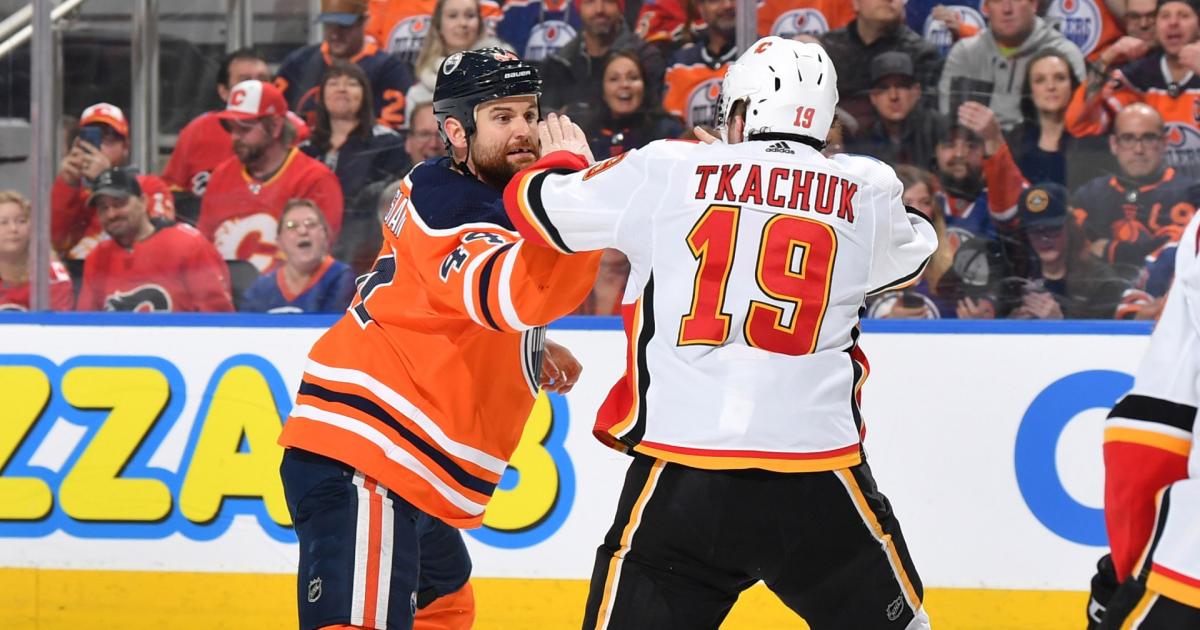 For the first time since 1991, we have the Battle of Alberta: Postseason Edition.

The Flames and Oilers kicked off their second-round series in style last night, with a 15-goal affair where goaltending was optional.

There wasn’t a ton of that pent-up bad blood boiling over like we’re used to seeing from the two Alberta teams, with only a scrum in the first period after a Milan Lucic hit on Connor McDavid.

But the game did end the only way the Oilers and Flames know how and that was some extracurricular activities in the final 15 seconds.

This is the sixth time in NHL history that the two clubs are meeting in the postseason and it brings back a lot of memories. During the 1980s, the Alberta clubs were two of the best teams consistently in the Smythe Division, meaning they were destined to meet each other a number of times. The Oilers had greats such as Wayne Gretzky, Mark Messier, Jari Kurri and Paul Coffey while the Flames had Lanny McDonald, Al McInnis and Joe Niewendyk.

From brawls to own goals, this series has a chance to add to a rivalry that already has a plethora of notable moments.

Here is a look at when the two teams had previously met in the postseason.

The first time the Oilers and Flames met in the playoffs, it was all Edmonton the entire way.

The offensive machine in Edmonton won the 1983 Smythe Division finals in five games over Calgary, outscoring the opposition 35-15 in the series. It was the Flames’ first taste of just how good the combination of Wayne Gretzky, Mark Messier and Jari Kurri were come playoff time.

In Game 5, the Flames went out with a whimper, getting thumped by their rivals 9-1.

After the beating the Flames received the year before, the two teams met again in 1984, but this time it was a much tighter series.

The Oilers were the better team through the first four games, jumping out to a 3-1 series lead, with the lone Calgary win coming in Game 2 thanks to a Carey Wilson OT goal.

In Game 5 and Game 6, the Flames pulled out 5-4 wins in both, with Game 6 decided by a Lanny McDonald overtime winner. But in Game 7, the Oilers scored four straight goals after falling behind 4-3 to come out victorious in the game and in the series.

The one and only time the Flames have defeated the Oilers in the postseason came in 1986, and this one won’t be forgotten.

Game 1 featured fireworks right away. In the Flames’ 4-1 win to open the series, multiple brawls broke out, one in the first and one in the third. Both Dave Semenko and Marty McSorley received game misconducts for their actions, and immediately added fuel to an already intense rivalry.

The series had been a back-and-forth battle, with each team alternating wins. Edmonton had just grabbed a 5-2 win in Game 6 to force the winner-take-all Game 7.

Tied 2-2 late in the third period, Oilers rookie defenseman Steve Smith took the puck behind his net. In an attempt to pass the puck up the ice, he hit goaltender Grant Fuhr and the puck bounced into the Oilers’ net.

It not only gave the Flames the lead, but it ended up as the game-winning goal, ending Edmonton’s bid at winning three consecutive Stanley Cups.

MORE: Who is leading the postseason in points?

Heading into the 1988 playoffs, the Flames had snapped the Oilers’ streak of six straight Smythe Division titles, finishing six points ahead of Edmonton. With Gretzky coming off his worst regular season since his rookie year, the Flames were favored in the series.

Well, the Oilers proved the regular season means nothing when it comes to the playoffs. Though there were four tightly contested games, Edmonton came out on top in all of them, sweeping the Flames out of the playoffs.

The rivalry reignited again in the postseason in 1991, when the two battled it out for the first time in the Smythe Division semifinals. This series was one for the ages.

The Oilers built a 3-1 series lead over the Flames, but Calgary battled back. They earned a 5-3 victory in Game 5 to stay alive, and then in Game 6 it was Theo Fleury stealing the show.

The Flames forward not only potted the overtime winner on a breakaway to keep Calgary’s season afloat, but he will forever be remembered for his crazy celebration, sliding on his knees all the way down to the other end of the ice.

However, it was Edmonton that got the last laugh. In Game 7, the contest again went to overtime. But this time, it was Esa Tikkanen who potted the game-winning goal with a snipe over the glove of Michael Vernon, sending the Oilers to the next round.