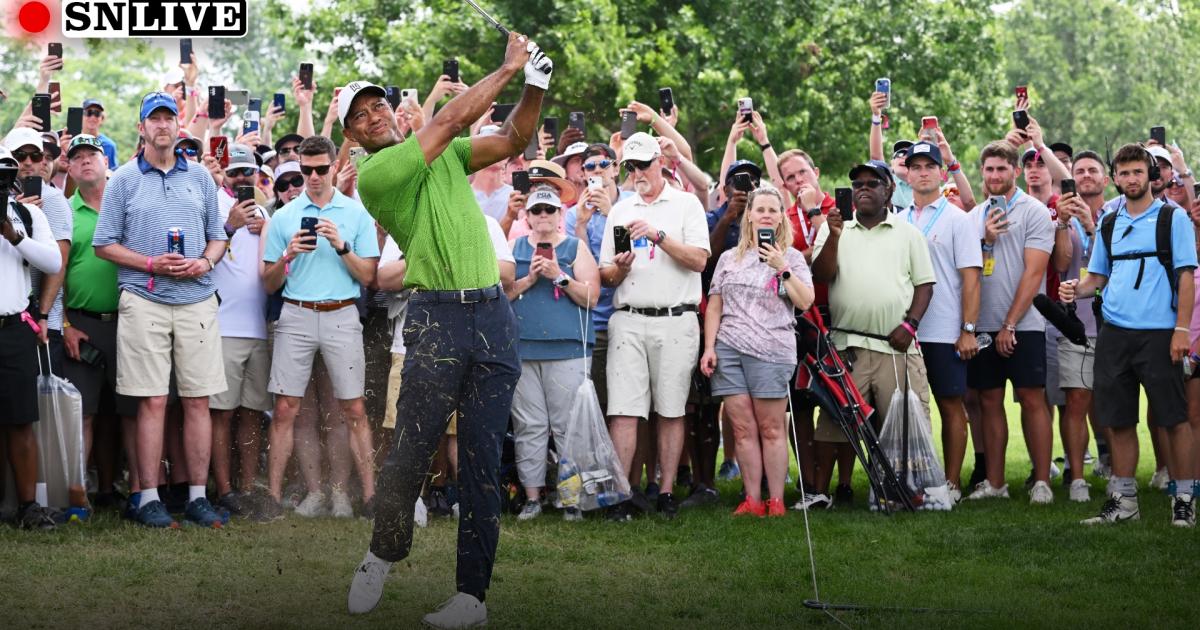 There will be plenty of eyes on Tiger Woods’ group at the 2022 PGA Championship on Friday.

For starters, Rory McIlroy finished Round 1 with one of the best starts to a major in his career at 5 under par. He entered the second day of the tournament trailing only Justin Thomas. Expectations were high for Jordan Spieth, who got off to a slow start but showed glimpses of why he was considered one of the early favorites to win the tournament.

Then, of course, there’s Woods. The four-time PGA Championship winner got off to a fast start (2 under through the first five holes), but finished at 4 over for the day. That puts Woods in danger of missing the cut. Woods also appeared to be dealing with a leg injury that he said hampered his play.

Woods will have nearly 12 hours from the end of his first round to the start of his second. He hopes to make the cut in his second major tournament in 2022.

The Sporting News is tracking scores and highlights from the Woods-McIlroy-Spieth group in the second round of the 2022 PGA Championship. Follow along for coverage of their rounds at Southern Hills Country Club in Tulsa, Okla.

Scores listed are through the first two rounds of the tournament.

Shot 1: Woods’ iron shot carries well over the green, and might have been stopped by the grandstand. Spieth’s hooks to the right and lands in the bunker to the side of the green. McIlroy’s shot hits the center of the green and rolls just off.

Shot 4: Woods finishes up with par. He has yet to finish above par through the second round. Spieth makes the long putt for par. McIlroy misses the putt for par.

Shot 3: Spieth rolls his shot out in front of the pin from the bunker. Woods fires in his wedge shot close to the hole, and will be set up well for another par. McIlroy gains some distance on the putt, but he’ll still have a longer putt for par.

Shot 2: Woods’ shot trails to the right and just misses the green. It avoids rolling down too close to the water. McIlroy hits the far-side of the green on his second shot. Spieth’s shot hits the edge of the green and appears to roll into the bunker.

Shot 1: Woods drives it straight down the fairway, and it hooks just to the right at the end. He’s landed on every fairway since the second hole. Spieth’s drive bends a bit to the left and curves into the rough. McIlroy keeps his drive on the middle of the fairway to start the seventh hole.

Shot 3: Spieth, Woods and McIlroy finish off for par.

Shot 2: Really nice putt from 40 feet out by McIlroy to land close to the hole. Set up well for par on the next shot. Putt by Spieth nearly finishes with a birdie, but it comes up just short. Woods’ putt for birdie also comes up so close, just rolls around the edge of the hole.

Shot 1: Woods, Spieth and McIlroy each send their iron shots onto the green to start the sixth hole. Looks like Woods is the closest. McIlroy has the furthest to go.

Shot 5: McIlroy and Spieth both settle for par.

Shot 4: Spieth and McIlroy both come up short on putt attempts for a birdie. Woods picks up his first birdie by finishing off the putt.

Tiger’s dialed in early after this birdie 🐅

Shot 3: Spieth lands on the green, and while the ball rolled away from the pin, it stayed on the green to set him up for a two-putt par. Woods with a great approach. His shot bounces right in front of the pin and he’ll have a short putt for a birdie. McIlroy lifts his shot out of the bunker and keeps it on the green well within range of a putt for par.

Shot 2: Spieth sends his shot out onto the fairway. Woods sends a stinger that stays in the fairway after a few bounces. McIlroy redeems a bad start by nearly reaching the green, but falling into the bunker, with the iron from deep within the crowd. He’s now the closest to the pin.

Shot 1: Spieth’s shot hits the trees and rolls onto the left rough near the crowd. Just missed the bunker on the left side of the par 5 hole. Woods’ drive curves right back onto the center of the fairway. Third straight hole he’s landed on the fairway. McIlroy drives his to the left, but it doesn’t appear to curve far. He might be shooting his second shot within the crowd.

Shot 4: Woods is a perfect four-for-four on making par on Friday. McIlroy also finishes the hole with par.

Shot 3: McIlroy’s shot is a bit to the right of the hole, not quite in tap-in range. It’ll take another shot to make par. Woods’ birdie putt passes on the right, and he’ll also need a second putt. Spieth with the perfect putt to sink the first birdie from this group.

Shot 2: From 121 yards out, Woods sends his shot right out to the middle of the green. Great start for him. Spieth’s shot lands feet away from the hole, setting him up for the best birdie chance of the day from this group. McIlroy’s ball lands between Woods’ and Spieth’s.

Shot 1: Woods sends a stinger up the middle that stays in the fairway. Spieth drives it hard, but it carries to the left into the rough. McIlroy connects on his drive well, sending it perfectly down the middle on the fairway.

Shot 4: Spieth, Woods and McIlroy all finish up with par.

Shot 3: McIlroy with a near-perfect chip shot. His shot is on point near the pin. Short putt for par coming up. Excitement from the crowd on Woods’ putt that nearly reaches the hole, but it stops short. Tap-in to come. Spieth’s putt is just wide to the right. He’ll have to settle for par.

Shot 2: McIlroy’s iron shot falls just short of the green. Woods lands his on the green, which will set him up for a two-putt par or a long try for birdie. Spieth is the closest to the pin, however, and he’ll have a chance to putt for birdie.

Shot 1: Woods is the first in the group to land his drive on the fairway to start. He sends his first shot on the third hole straight up the middle. Spieth sends his shot right out by Woods, as he, too, lands on the fairway for the first time. McIlroy’s shot looks like it gets slowed up by the tree and drops down in the rough.

Shot 5: McIlroy taps his putt in for the bogey.

Shot 4: McIlroy nearly rolls his in from the edge, but it is just short. He’ll need a tap-in to finish off the bogey. Spieth and Woods both finish putts for par.

Shot 3: Very nearly a chip-in from the bunker by Woods. His shot rolls almost all the way to the pin, but doesn’t have enough behind it to finish rolling in. He is set up well for par on his first putt. McIlroy hits his shot a bit too hard, and it rolls across the green and to the edge. Spieth rolls his out close to the pin, but it stops short.

Shot 2: Woods’ second shot lands in the bunker in front of the green. Great approach by Spieth as he sends his shot out onto the green. McIlroy’s shot bounces off the green and rolls nearly into the bunker behind it, but it stays just on the grass.

Shot 1: All three drives by McIlroy, Woods and Spieth hook right into the rough. None of the three golfers have been able to land in the fairway to start, a product of the strong winds in Tulsa.

Shot 5: Spieth ends his round with a bogey.

Shot 4: Spieth nearly makes the long putt for par, but it just curves left at the end to miss the hole and go a few feet past. Woods finishes the tap-in to finish the hole with par. He bogeyed the hole in Round 1. McIlroy sinks his putt for par.

Shot 3: Spieth’s third shot hits the edge of the green and rolls onto the green. McIlroy flips a wedge shot from the edge to within five feet of the pin. He’s set up well for par. Woods’ putt can’t curve enough to make the long birdie putt, but he’ll settle for a tap-in par.

Shot 2: Woods lands his shot on the green, setting up for a long putt for birdie or a two-putt par. Spieth sends his ball straight into a tree branch just a few yards in front of him. McIlroy gently sends his shot out toward the green, but it stays on the edge.

Woods, Rory McIlroy and Jordan Spieth will begin their second round at the PGA Championship from the No. 1 tee at 2:36 p.m. ET.

How to watch 2022 PGA Championship Round 2

ESPN will handle the broadcast of the second day of the 2022 PGA Championship. The network’s coverage will begin at 1 p.m. ET with an alternate broadcast featuring Joe Buck and Michael Collins. Buck and Collins will shift to ESPN2 at 2 p.m. ET, when the main ESPN broadcast team will take over.

Because Woods, McIlroy and Spieth are scheduled to tee off at 2:36 p.m. ET, they can be viewed on the main ESPN broadcast.

Those hoping to stream the broadcast can find it on ESPN+ or on fuboTV, which offers a free trial.

What’s Not to Love About Cameron Diaz and Her Iconic Rom-Coms
How to watch Manchester United’s pre-season tour of Australia and Thailand: TV channel, live streams for every match in 2022
Amber Heard Asks for Verdict to be Tossed, Lack of Evidence & Fake Juror
I’m a Shopping Expert, and I Swear By This $30 Skort From Old Navy
Sonny Barger Dies; Sons of Anarchy Actor and Hells Angels Founder Was 83