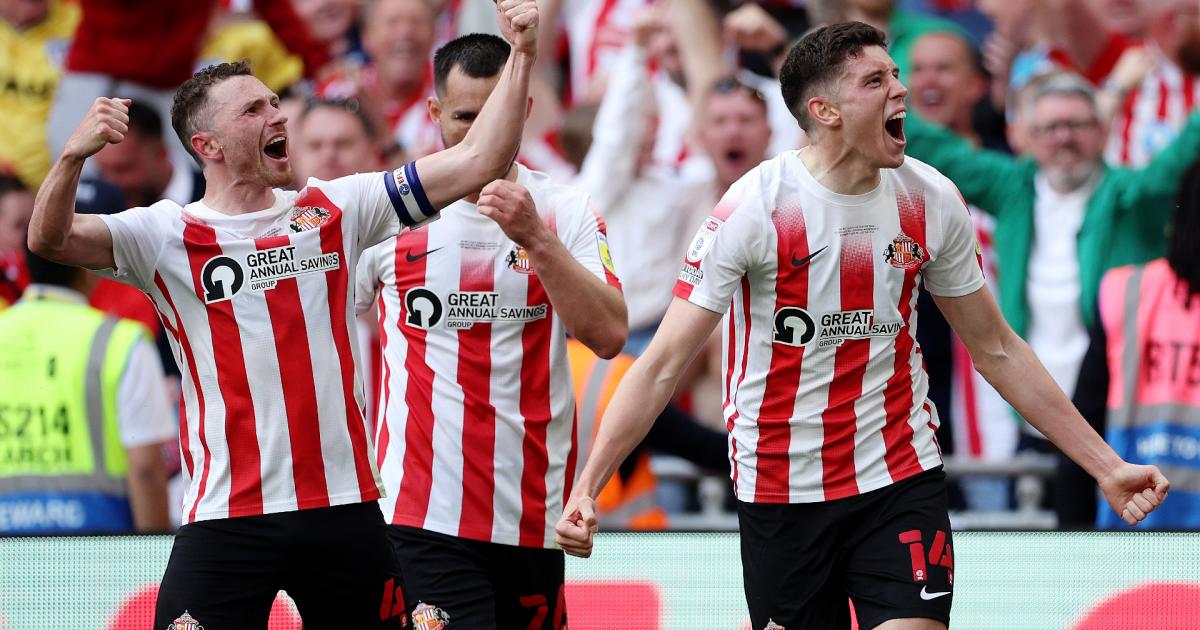 WEMBLEY STADIUM, LONDON — Sunderland are back in the Championship after defeating Wycombe Wanderers 2-0 in the League One playoff final to end an agonising four-year spell in the third tier of English football.

Elliott Embleton and Ross Stewart were the heroes on Saturday afternoon, scoring 12 minutes from the start and end respectively, to secure the Black Cats’ first playoff promotion from any league after six failed attempts across the past 35 years.

Wycombe, despite gaining a foothold in the contest after the break, were clearly second-best on a surprisingly drama-free afternoon for the men in red and white. For the Chairboys, it marks the end of an era, with iconic striker Adebayo Akinfenwa making his final appearance from the bench.

As soon as the semi-finals were decided, this felt like an occasion all about Sunderland – after all, this is a giant of a football club which really has no business being in the third division, and should be a perennial fixture in the Premier League. Wearside fans had suffered enormous Wembley heartache in recent decades – be it during their six painful playoff campaigns, or a handful of EFL Cup and EFL Trophy finals.

Even when glory in the latter did eventually come last season, it was not witnessed by a single fan inside Wembley, thanks to Covid restrictions. It meant the Sunderland faithful had been waiting 49 years to see their side win at the home of football.

The relative size of the two clubs seemed to play into the bookmakers’ odds and countless prematch predictions, with Wycombe the underdogs. But ultimately, this is a team which had tasted Championship football as recently as last season, are much more comfortable in their own skin thanks to the longevity of Gareth Ainsworth’s reign, and have a sprinkling of talent far too good for this level, much as Gareth McCleary and Sam Vokes.

In the early knockings, though, that all meant nothing, and was indeed Sunderland who took the game by the scruff of its neck. The Sunderland support – which had taken over large swathes of the upper and middle tiers in Wycombe’s half of Wembley – roared their men to a ferocious start. The tempo on both sides of the ball was high, and it was accompanied by some lovely passing moves.

Patrick Roberts looked a menace down the right, creating the first real opening, before Alex Pritchard began pulling the strings from the middle. But it was the returning Embleton who struck the opening blow, capitalising on the early one-way traffic.

The No.8, who had previously caused a couple of issues for the Wycombe back-line down the left, came inside and drove through. The Chairboys’ defence parted and allowed Embleton to unleash a 20-yard strike which seemed to blast through goalkeeper David Stockdale, to send the west half of Wembley wild. It looked to be an error from Stockdale, though he potentially lost the trajectory of the ball in the sun, in a very bright north-west London.

After that, the rest of the half surprisingly didn’t elicit much reaction from those in red and white in the stands – who had entirely taken over Trafalgar Square earlier in the day – because it was all rather calm. Alex Neil’s men looked extremely comfortable, taking the sting out of the game.

Both he and Ainsworth – who presided over 13- and 12-game unbeaten streaks to end the regular season, respectively – would’ve toyed with using three-man backlines throughout the week, but two of the league’s top tacticians matched up with 4-2-3-1s on the day. For both, the majority of the threat came down the flanks through the first period, but while Sunderland looked genuine goalscorers each time, Wycombe’s wide men ultimately struggled to make the killer ball, such was the brilliant structure and workrate of the opposition.

Indeed, McCleary and Jordan Obita were given no room to breathe. Conversely, the Black Cats were rolling out the party pieces at times, cheeky backheels to set up slick moves into the middle, while Roberts jinked and jived his way past the right side of Wycombe on multiple occasions.

No jeapordy, no drama, nothing silly. On the big stage, it was very un-Sunderland.

That dragging sense of inevitably reared its head a minute after the restart, as Dennis Cirkin picked up a needless yellow for a late challenge in Sunderland territory. A spell of Wycombe possession later, Vokes was gifted the ball by the Black Cats defence 20 yards out, but couldn’t bring it under his spell. By the hour mark, a mix-up at the back from a routine cross saw Vokes bearing down on the Sunderland goal from just a few yards out, but Anthony Patterson made himself big.

Akinfenwa was introduced with a quarter-hour remaining, making his 250th and final appearance in blue. Immediately, the imposing centre-forward saw the ball directed towards him and stick to him. He was involved in the play three times in his first minute, winning a flick-on and attempting two more passes into Vokes, but it couldn’t quite come off.

Fellow substitute Brandon Hanlan had a golden chance cutting in from the right moments later, but his tame effort was gratefully received by Patterson.

That turned out to be the game.

Sunderland went up the other end and killed off any hopes of the fightback with a Stewart goal. Pritchard, impressive throughout, darted inside and played in Stewart on the edge of the area, who took a touch in front of the centre-halves and calmly slotted past a helpless Stockdale.

Former Manchester City youngster Roberts almost added a flourish, with his attempt at a third curling just wide with five minutes left, and Wembley rocking to deafening North-East voices. A further one-on-one followed, but it wasn’t needed, as Sunderland held on for the victory.

Neil – who previously masterminded Norwich City’s run to Championship playoff glory in 2014/15 – has done wonders with this team. In early Spring, many a Sunderland fan was spent ruing the fact he wasn’t hired just two or three weeks earlier than his mid-February arrival, as automatic promotion would seemingly have been a cert. But after this day of all days, they wouldn’t want it any other way.