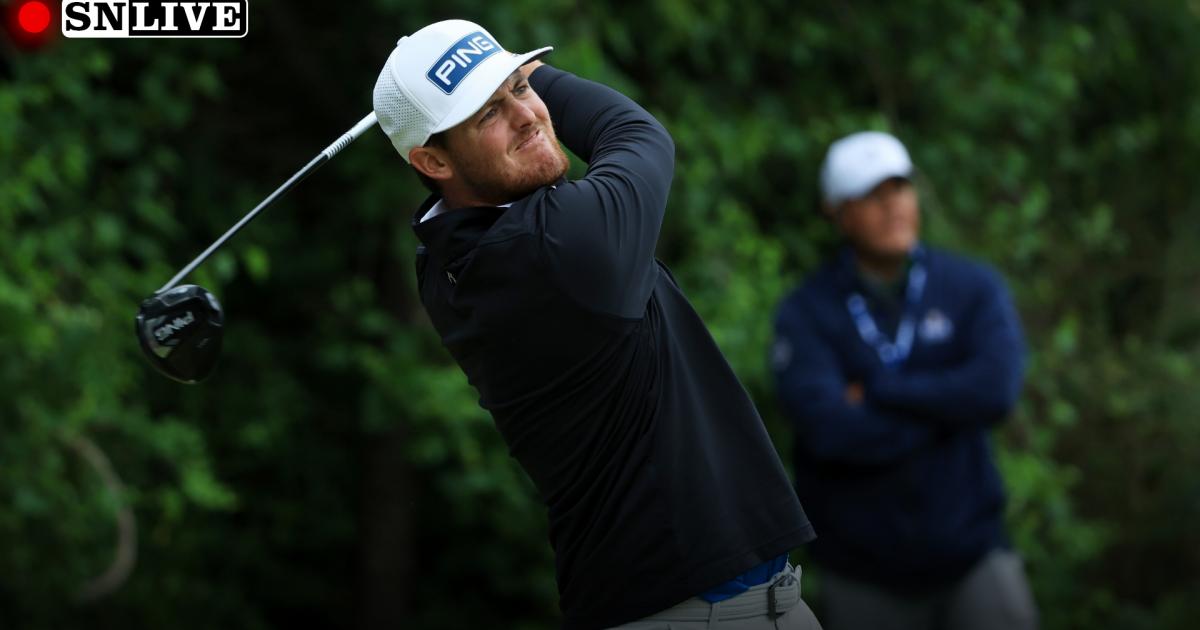 Mito Pereira had never led a round in a PGA Tour event before Saturday. Yet, as he prepares to start the fourth round of the 2022 PGA Championship, he finds himself not only in contention for a major title, but also in the driver’s seat.

Pereira (-9) ended the third round with a three-stroke lead over Matt Fitzpatrick (-6) and Will Zalatoris (-6), two other golfers who have yet to win a PGA Tour event. The only golfer in the top five at the PGA Championship with any PGA Tour wins is Abraham Ancer, who won the 2021 WGC-FedEx St. Jude Invitational.

The biggest uncertainty heading into the final round at Southern Hills Country Club will be the weather conditions. The previous three days have offered different looks, ranging from scorching hot to cold and windy.

The Sporting News is providing live updates and highlights from Sunday’s Round 4 at the 2022 PGA Championship. Follow along for coverage of the major tournament at Southern Hills Country Club in Tulsa, Okla.

4:36 p.m.: Pereira and Fitzpatrick both hook their drives wide right on the nine hole.

4:32 p.m.: Cameron Young birdies to move up to a tie for second with Zalatoris.

Cameron Young makes the turn just one shot back. pic.twitter.com/GeLGJY84g6

4:31 p.m.: Now Justin Thomas makes an appearance in the top five after this birdie on the 11th hole.

4:28 p.m.: Another bad luck shot for Zalatoris, as his iron shot on the nine hits the middle of the green and it takes a roll down. He keeps it on the green, but that will be a long putt coming up.

4:19 p.m.: Good approach by Zalatoris on the eight gives him a chance to save par with the putt.

4:14 p.m.: Zalatoris’ tee shot on the eighth hole sails over the green and nearly lands in the creek, but stops on the upslope.

4:06 p.m.: Young’s shot on the seventh hole just misses the creek, and he makes the most of the narrow miss with a good approach that sets him up for a decent shot at par. Fitzpatrick makes a bogey on the six and Pereira makes the putt for par to stay two strokes ahead of Zalatoris.

4:05 p.m.: Pereira can’t make the long birdie putt, but he should have a short putt for par on the sixth hole.

4:04 p.m.: Second straight bogey for Ancer, who drops out of the top five.

4 p.m.: Costly shot by Fitzpatrick as his shot splashes into the creek on the sixth hole.

3:56 p.m.: Zalatoris goes from the cart path and makes a great putt to make bogey.

3:54 p.m.: Zalatoris has to take a shot from the cart path, and it’s a good one as he sends the ball out to just a few feet away from the tee. Makes the most of a tough situation.

Zalatoris with an impressive display from the cart path. pic.twitter.com/xIAZDTIJtv

3:48 p.m.: Pereira moves back to 9 under with a birdie on the fifth hole, and he has reclaimed the lead.

3:47 p.m.: Zalatoris is taking the one stroke penalty, and the CBS broadcast explains that it might be nearly a loss of three strokes due to the cart path and television tower in the way.

3:43 p.m.: Zalatoris’ iron shot on the sixth sails over the green and bounces past the gallery. The ball landed in the bushes behind the cart path. Tough break on the par 3 hole.

Not the situation Will Zalatoris was hoping for as he takes an unplayable lie on the 6th after finding the trees. pic.twitter.com/NZ77GP0DNB

3:39 p.m.: Zalatoris drops in the birdie on the fifth hole to tie Pereira for the lead.

With a birdie on No. 5, Will Zalatoris is now tied for the lead.#PGAChamp pic.twitter.com/ogLeLBMKCh

3:39 p.m.: Cameron Young sinks the birdie putt on the par 5 fifth, and he’s now tied with Fitzpatrick for third.

3:29 p.m.: Pereira misses the nine-foot putt for a birdie and taps in for par. Fitzpatrick birdies to move up to sole possession of third at 6 under.

3:25 p.m.: Pereira starts the fourth hole with a stinger, and follows it up with a great approach, dropping it a few feet away from the pin.

Quite the stinger from Mito 💪pic.twitter.com/VAl7EqRTyM

3:19 p.m.: Zalatoris birdies the fourth hole, and all of a sudden, he’s just one stroke behind Pereira for the lead.

Will Zalatoris is now within one stroke of the leader after this birdie on 4 👏 pic.twitter.com/6UOjVOcXIB

3:17 p.m.: Pereira’s putt on the third hole lips around the cup, and he has to putt for a bogey. His lead over Zalatoris drops to just two strokes.

3:04 p.m.: Webb Simpson birdies the fifth hole, and he’s now tied for fifth at 3 under. He’s had quite the turnaround from being 4 over after the first two rounds to dropping his score by seven strokes over his next 23 holes.

3:02 p.m.: Zalatoris has stayed even through the first two holes, as has Pereira. Still a three-stroke gap between the two for the lead.

2:49 p.m.: Fitzpatrick just misses the putt for par, while Pereira makes his putt. Fitzpatrick stays with the bogey, but is now four strokes behind Pereira.

2:48 p.m.: Really tough second hole for Seamus Power, who double bogeys the par 4. He drops from a tie for fifth to a tie for 12th, and is now just 1 under for the tournament.

2:45 p.m.: McIlroy misses the putt for birdie on the ninth hole to finish his front nine 3 under. He’s still six strokes back of the leader.

2:36 p.m.: The two leaders, Mito Pereira and Matt Fitzpatrick, have teed off at the first hole.

Here we go! The final group has teed off.#PGAChamp

2:27 p.m.: Cameron Young and Will Zalatoris have teed off on the first hole. Only one pairing left in the final round.

2:08 p.m.: Stewart Cink and Justin Thomas tee off, both sending drives straight down the fairway on the first hole.

2:05 p.m.: McIlroy’s putt carries just wide, and he has to settle for the tap-in bogie. He drops out of the top five.

2:02 p.m.: Rough chip shot by McIlroy, as he remains still several yards away from the hole. He’ll have a long putt for par, and could be looking at his first bogey.

2 p.m.: The career grand slam hopes will have to wait another year for Spieth, who putts for par on the 18 to end his PGA Championship at 4 over.

1:55 p.m.: Another birdie by McIlroy, his fourth straight, and he’s entered the top five. The two-time PGA Championship winner is making a late push.

Four birdies in a row. Keep an eye on Rory 👀#PGAChamp pic.twitter.com/9BF7fje3Qc

1:44 p.m.: Cameron Smith is now tied for 11th at 1 under after a birdie on the fifth hole that was set up by this iron shot from behind the trees.

Cam Smith from out of the trees and 287 yards out 🤯 pic.twitter.com/GRIU5Y9GmY

Jordan Spieth came SO CLOSE to a hole-in-one on the par-4 17th. pic.twitter.com/yuylw6OJMc

1:37 p.m.: McIlroy sinks a long putt for a birdie, his third straight, and he’s now tied for sixth and six strokes back of Pereira.

1:26 p.m.: Make it back-to-back birdies for McIlroy, who is now 2 under and all of a sudden tied for seventh. He’s seven strokes behind Mito Pereira for the lead.

1:09 p.m.: Joaquin Niemann is moving up the leaderboard. He birdies the third hole to get to even for the tournament, tying himself at 17th overall.

12:59 p.m.: Rory McIlroy has begun his final round at Southern Hills.

12:32 p.m.: The hometown crowd likes what they’re seeing out of Gooch on Sunday. He’s 2 under par in the final round and is tied for 23 at 1 over for the tournament.

Burying it from the bunker ⤵️

12 p.m.: The weather in Tulsa, Okla., is similar to the conditions on Saturday. It is just under 60 degrees out with a chance of rain, though the wind isn’t nearly as gusty as it has been in the past several days. To this point, none of the golfers that have teed up in the morning have moved into the top 20. Talor Gooch, who is 1 under through four holes, has moved up eight spots and is 2 over for the tournament.

What channel is the PGA Championship on today?

Coverage of the fourth round of the PGA Championship will be split between ESPN and CBS. ESPN+ will handle the morning broadcast until 10 a.m. ET, when ESPN will take over the main broadcast. ESPN+ will continue coverage of featured groups and select holes.

CBS will take over at 1 p.m. ET and carry the broadcast through the rest of the round.

Here’s a look at the full broadcast schedule of the 2022 PGA Championship. All times are Eastern.