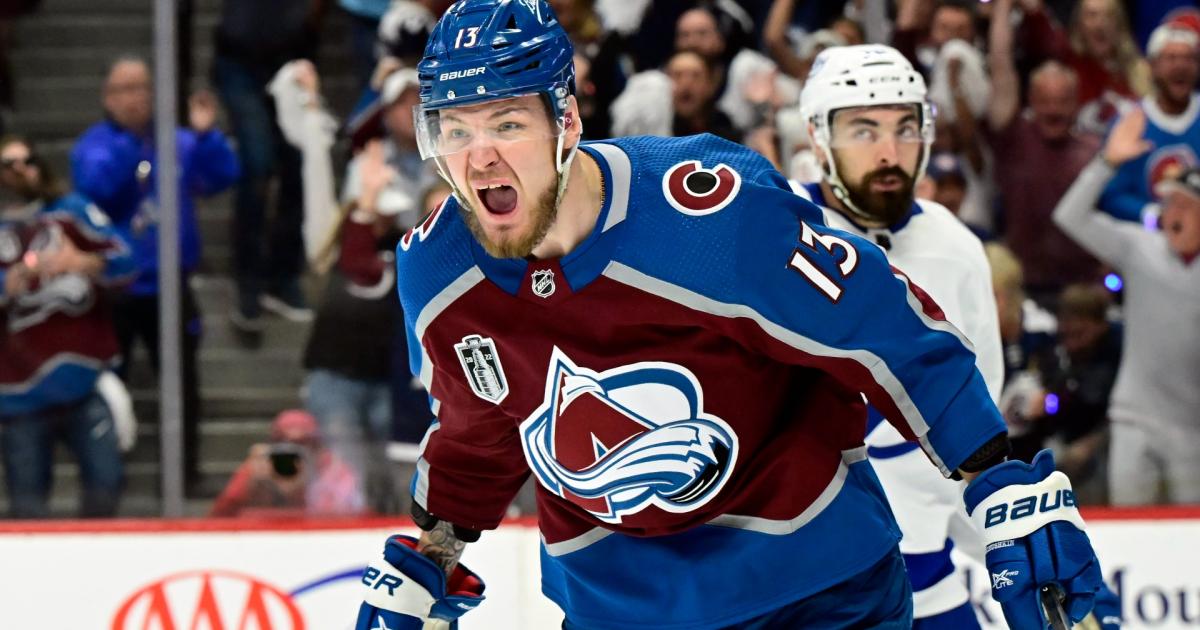 The 27-year-old Russian winger has come a long way from having his contract bought out by the Stars and signing a one-year, $850,000 deal with the Avalanche. In his third year with Colorado, he has turned his game around and then some.

On a team loaded with star talent and big names, Nichushkin has shone the brightest so far in the Stanley Cup Final. In the Avalanche’s two victories over the Lightning to begin the series, Nichushkin has four points, including a two-goal performance in Colorado’s 7-0 thumping of Tampa Bay in Game 2.

That’s how you kick it off 😎#GoAvsGo pic.twitter.com/M8LvLSGKgK

Looking at that Nichushkin second goal like 👀 #GoAvsGo pic.twitter.com/1qjMj2Rcvg

Nichushkin very well could have had a hat trick in Game 2. Lightning goalie Andrei Vasilevskiy robbed him on a backhand attempt in the second period.

The pending free agent became just the sixth player since 1990 to score multiple points in each of the first two games of the Stanley Cup Final.

Perhaps the most impressive stat? With Nichushkin on the ice at 5 on 5, the Avalanche had 13 scoring chances. The Lightning did not have a single one.

After a regular season where he posted career highs in goals (25), assists (27) and points (52) in just 65 games, Nichushkin has been integral to the Avs’ success this postseason. Coach Jared Bednar praised his efforts after Game 2, saying the power forward is “built for this time of year.”

Nichushkin — the No. 10 pick overall in the 2013 NHL Draft by Dallas — has been known for his defensive ability, but the points have been flowing while he being paired with Nathan MacKinnon and Gabriel Landeskog. He’s up to 13 points in 16 playoff games.

What makes him so effective is his relentless effort in all three zones. He is an absolute pain in the butt in the offensive zone, constantly getting on defenders while they’re attempting to retrieve pucks in their corner. He possesses high-end skill and poise with the puck, making slick plays like the one in overtime of Game 1 to find Andre Burakovsky for the game-winner.

At the end of the day, he’s a workhorse who gives 100 percent every shift and is a headache for the opposition to handle because of his size (6-4, 210 pounds).

He is peaking at the right time, which is benefitting not only the Avalanche but also Nichushkin. As a free agent this summer, he is in line to get paid, especially if the Avs win the Cup. Look at the contracts that Blake Coleman and Barclay Goodrow got after hitting free agency with rings on their fingers; there’s no doubt a Cup will increase Nichushkin’s next paycheck.

If the series continues to trend in Colorado’s favor, it’ll be hard for Nichushkin to overtake Cale Makar or MacKinnon for the Conn Smythe Trophy as playoff MVP. But Nichushkin certainly deserves all of the praise he’s receiving. He has been a key cog in the well-oiled machine from Denver that is now halfway to raising the Stanley Cup.