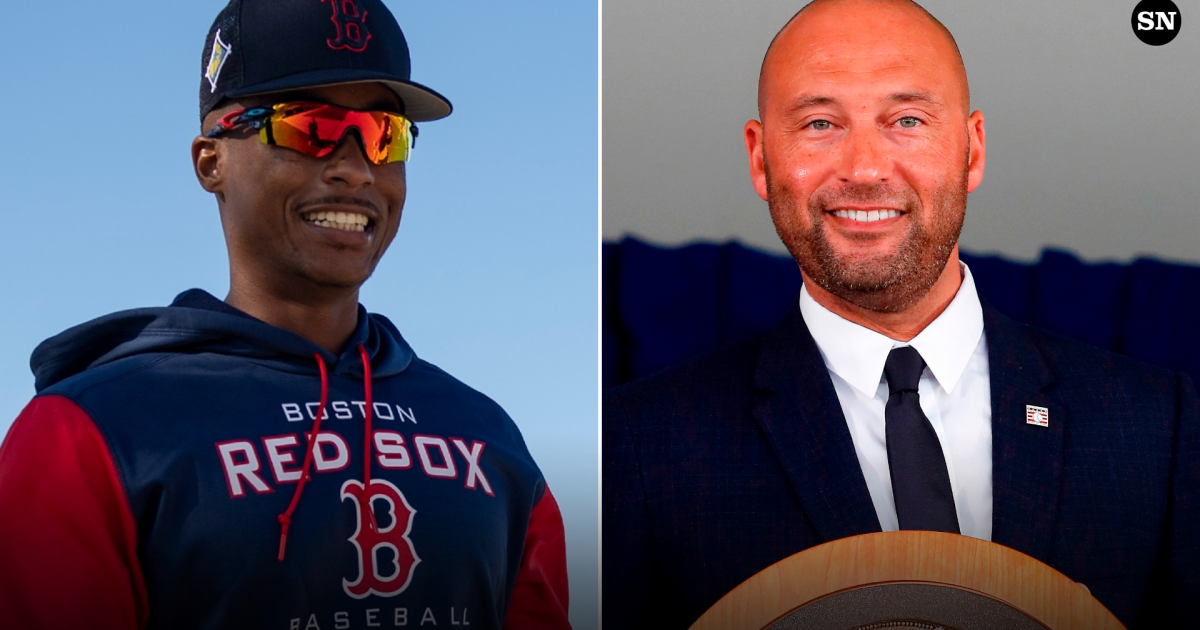 Shortstop Jeter Downs earned a call-up to the majors on Monday, as one of the prized prospects of the deal that sent Mookie Betts to Los Angeles gets his first cup of coffee in the majors:

To make room for Downs on the active roster, the club designated RHP James Norwood for assignment.

While Downs’ call-up is likely to be a short-lived one, with several Red Sox players expected to be activated off the IL soon, it could offer a small peek at the future for a player who was considered a Top 100 prospect in baseball not too long ago.

Here’s what you need to know about one of the Red Sox’s top prospects:

Who is Jeter Downs?

Downs, now 23, is projected to be a utility infielder at the next level, likely moving from shortstop to second in the big leagues. He’s expected to have slightly above average power, with a power-over-contact approach.

Downs was a key piece of the trade that sent Mookie Betts to the Dodgers in 2020. Coming back East with him was outfielder Alex Verdugo and prospect Connor Wong. Since then, Downs has played exclusively in the minors.

While he was formerly an MLB Pipeline Top 100 prospect, Downs has stagnated in the minors since he was traded from Los Angeles to Boston: In two seasons at Triple-A Worcester, Downs is slashing .187/.281/.355 over 627 plate appearances.

It wasn’t the first blockbuster trade that Downs had been a part of: Downs, former first-round pick of the Reds, was sent to the Dodgers as part of a package that brought Yasiel Puig to the Reds in 2017.

In a bizarre twist of fate, yes, the Red Sox infielder is named after the Yankee icon.

Speaking with MLB.com in 2017, Downs explained how he was named after former New York shortstop Derek Jeter:

“When he came into the Major Leagues, he was the name. He was the thing. He was shining,” Downs told MLB.com in 2017. “It was ‘Jeter this, Jeter that.’ It was actually my Mom’s idea. My brother got Jerry from my Dad [Jerry Sr.]. It was my Mom’s turn to pick a name since I was a second child. She just fell in love with Jeter and the way he played, his humbleness, how he carried himself on and off the field.”

His ties don’t end with just the name, though. Interestingly enough, Downs was a first-round selection of the Reds in the 2017 MLB Draft. Famously, the Reds were debating drafting Jeter with the No. 5 selection in the 1992 MLB Draft, but ultimately passed on him for power hitting outfielder Chad Mottola. Mottola would play in just 59 MLB games.

Boston’s superficial ties to the Yankees shortstop don’t end with Downs, either. Shortstop Xander Bogaerts wears No. 2 in honor of Jeter, while Trevor Story has said that the Hall of Famer was his favorite player growing up.

While Downs’ stay at the next level might be short-lived, Boston is likely hoping that Downs brings some of that Jeter staying power to Beantown.