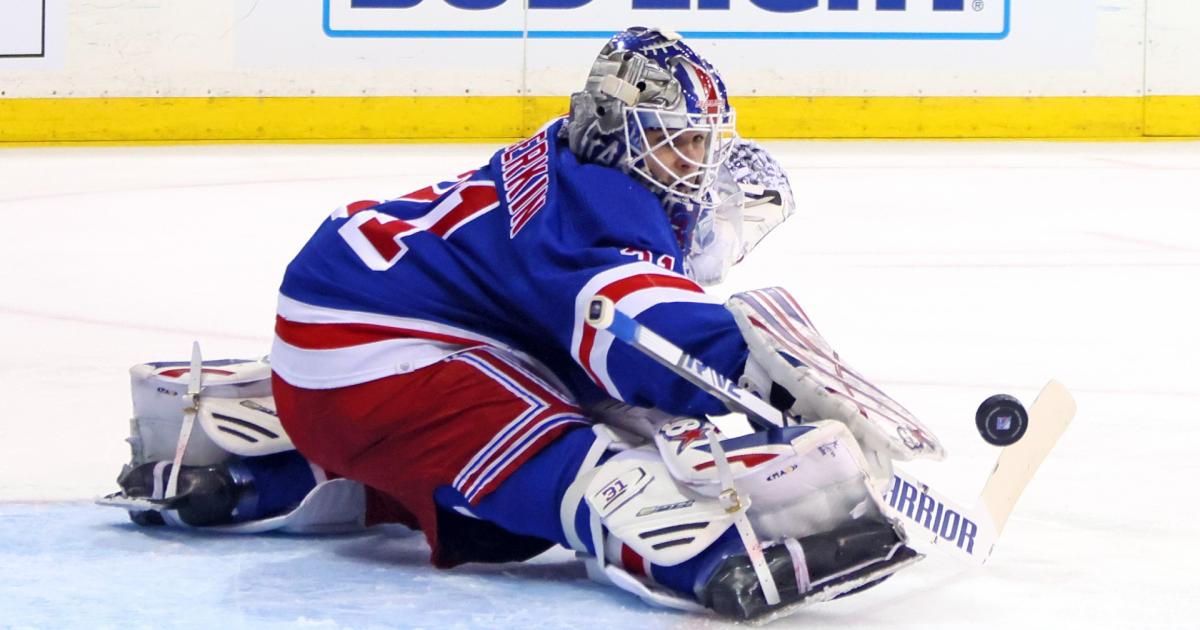 When it comes to the crease, no one has dominated it more this season than Igor Shesterkin.

The Rangers goaltender completed his third season in the NHL and second as New York’s starter. He has been the backbone of a team that enjoyed unexpected success this season; the Rangers finished second in the Metropolitan Division and made it all the way to the Eastern Conference Finals.

The Russian goalie made headlines early in the playoffs, making 79 saves in the Rangers’ 4-3 triple-overtime loss to the Penguins. It is the second-most saves by a goaltender in a game in NHL history.

On Tuesday, Shesterkin locked up the Vezina Trophy as the league’s best goaltender in 2022.

The 26-year-old has had such a strong season that he should be in serious consideration for the Hart Trophy, given to the player deemed most valuable to his team. It would be just the ninth time a goaltender has won the award, which has been around since 1924.

Just how good has Shesterkin been? The Sporting News lists five statistics that give insight into his phenomenal season.

One of the two simplest stats when it comes to goaltending, no one in the league finished with a better GAA than Shesterkin. His 2.07 was the best in the NHL.

Shstserkins also ended the regular season first in SV% with an impressive .935%.

Outside of March’s .916, Shesterkin did not finish any month with a save percentage below .920. Only five qualifying goalies in the league own a .920 save percentage or better for the season and no one besides Shesterkin was over .930. Not too shabby.

When looking at how often a goaltender wins games, it’s easy to look at total wins and compare throughout the league. Shesterkin had 36 wins, sixth-most in the league.

However, Shesterkin has started fewer games than every goaltender above him in the win column, so a fairer way to look at this is win percentage. This calculates how often the team wins with the goalie in net.

Shesterkin owns a .679 win percentage, second-best in the league behind the Panthers’ Sergei Bobrovsky. Those two, along with Andersen, are the only goaltenders this season to have won more than 65 percent of the games they’ve started.

Now let’s get into some advanced analytics. First is goals saved above expected, which is less complicated than it sounds. This statistic determines how many goals a goalie saved above what he was expected to allow given the shot quality. The way to determine this is to take a goalie’s expected goals against and subtract the actual goals against.

Shesterkin had most goals saved above expected with 34.1, per MoneyPuck. His expected goals against is 140.1; subtract his total goals allowed (106) from that and it comes out to roughly 34.1.

Finally, the last stat is wins above replacement. WAR in hockey is similar to WAR in baseball, where it’s most commonly known. It is a way to give a value to the number of wins attributed to a player if that player were to be substituted with a replacement-level player.

In layman’s terms, it’s how many more wins Shesterkin has provided the Rangers as opposed to what the most average NHL goalie would give them.

Why I love Kathy Bates’ performance in Misery
Wim Wenders: “With restoration, there’s a danger you can falsify the film.”
Blac Chyna Lands Crisis Publicist Role in Upcoming Movie ‘Secret Society 2’
Khloe Kardashian Reveals the Best Way to Flirt With Her
13 Chic Bridal-Shower Dresses, From Satin Midis to Cutout Styles