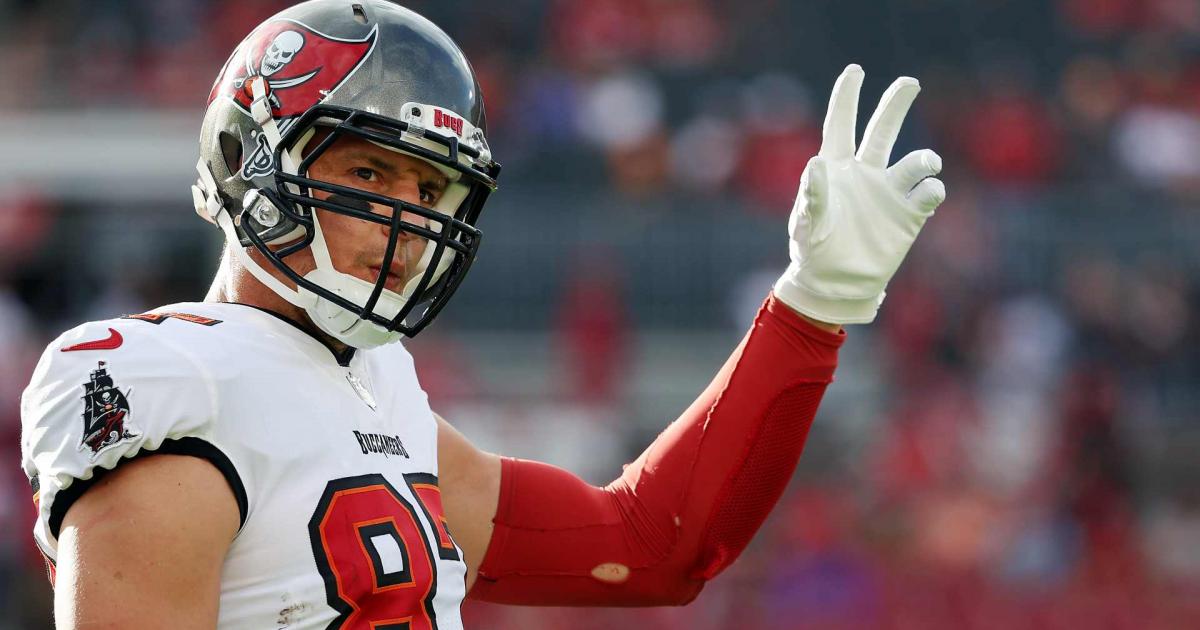 Rob Gronkowski appears to be calling it a career.

On Tuesday, Gronkowski posted across his social media platforms that he will be retiring from the NFL. Gronkowski retired following the 2018 season and sat out 2019, but came back for a two-year run with Tom Brady in Tampa Bay.

While Gronkowski’s announcement would appear to close the door on his career, his agent, Drew Rosenhaus, told ESPN’s Adam Schefter that if Brady were to call his long-time teammate, it would not be surprising “if Rob comes back during the season or next season.”

In reaction to Rob Gronkowski’s news, his agent Drew Rosenhaus texts: “It would not surprise me if Tom Brady calls him during the season to come back and Rob answers the call. This is just my opinion but I wouldn’t be surprised if Rob comes back during the season or next season.”

Here’s why Gronkowski made the decision to retire — for now, anyway.

Why Rob Gronkowski is retiring

In his announcement, Gronkowski did not explain too much about why he made the decision to retire, noting only that after a return from retirement to win a Super Bowl with the Buccaneers, he is going “back to chilling out.”

In his post, he did not specify what’s next for him, saying only that it could be “sailing the seas.”

“I will now be going back into my retirement home walking away from football again with my head held high knowing I gave it everything I had, good or bad, every time I stepped out on the field,” Gronkowski wrote. “The friendships and relationships I have made will last forever, and I appreciate every single one of my teammates and coaches for giving everything they had as well.”

Gronkowski has hinted recently that retirement could be the next step despite Brady making the decision to retire and un-retire during this offseason. He responded to a post on Instagram from teammate Leonard Fournette saying that he would be in the stands representing the No. 7, which is Fournette’s jersey number.

He had also already told TMZ Sports that he would either be retiring ahead of the 2022 campaign or returning to the Buccaneers, putting a halt to rumors that he could be eyeing a chance to play with a different quarterback besides Brady.

This all came after Brady announced his return from a 40-day retirement, after which Gronkowski had said there was a “very good chance” he’d come back for another season in Tampa Bay to play with Brady. Instead, he decided to bow out.

Brady congratulated his friend and longtime running mate in an Instagram post Tuesday, saying, “I’m proud of all that we’ve accomplished together, and even more excited for all you have ahead of you.”

The Buccaneers also thanked Gronkowski for his contributions.

“Rob is a true professional who left it all on the field for us the past two seasons and helped establish a championship culture in our building,” general manager Jason Licht said in a release. “He played a crucial part in our Super Bowl LV championship season in 2020 and battled through a number of injuries last year while on the way to one of the most productive receiving yardage seasons in his 11-year career.

“It is always difficult to see a great player walk away from the game when he is still enjoying that kind of success, but the overwhelming emotions I feel today are gratitude and respect for one of the greatest tight ends who ever played the game. While his on-field accomplishments will surely earn him a gold jacket and a place in the Pro Football Hall of Fame, it is his humble attitude and team-first approach to the game that truly defined his career.”

MORE: Bruce Arians might have stayed on as Bucs coach if Tom Brady had stayed retired

The only quarterback-receiver pairing that has connected for more touchdowns in NFL than the Gronk-Brady pairing is Peyton Manning to Marvin Harrison. According to Stathead, including the postseason, the longtime Colts pairing teamed up for 114 touchdowns in 10 years together. Brady has thrown 105 total touchdowns to Gronkowski in their 11 seasons as teammates.

All of the TV Dads We’d Love to Mow the Lawn With
Beyoncé’s New Song “Break My Soul” Will Have You Buzzing
College World Series scores: Day-by-day TV schedule, results for 2022 NCAA baseball tournament
Why Athletics, Rays need to figure out stadium situations soon, according to Rob Manfred
Gossip Girl Teases Return of Michelle Trachtenberg as Georgina Sparks