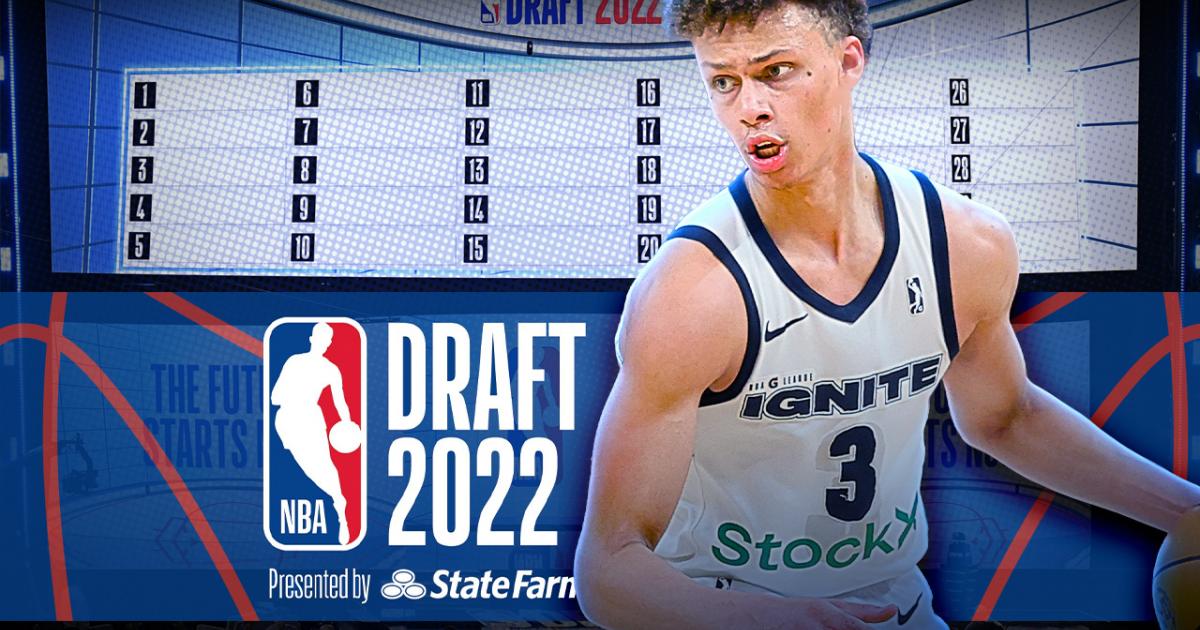 Australian-born Dyson Daniels’ NBA dreams are on the verge of becoming a reality as he prepares for his name to be called at Barclays Center on Friday night.

“If I looked back, 10 years ago today, I probably wouldn’t have thought I would have been in this position, but for me, it’s always been a dream of mine,” Daniels said in his pre-draft media availability.

A lot of hard work has gone into it and a lot of good coaching, a lot of good people I’ve been around and have definitely helped me get to where I am today.

Daniels looks to follow Josh Giddey’s path and become the second player ever from the NBA Global Academy to be drafted to the league– It continues the success of the program, both in Australia and around the world.

From joining the Academy as a 16-year-old to then moving to the G League Ignite, Daniels’ most important development years have come within NBA systems, preparing him for life as a professional basketball player.

“The NBA Academy has been huge for me, that was my real first development that I got, coming out of Australia,” Daniels said.

The great coaching, the great players that we competed against over there was really good and it, definitely prepared me and I think they prepared me as a person as well, as a player, and the G League that helped me as well, getting used to the American style of play and knowing how to compete against those type of players.

After an impressive season with the Ignite where he averaged 11.4 points, 6.2 rebounds, 4.4 assists and 1.9 steals, Daniels’ draft stock continued to rise after showing out at the Draft Combine, posting a 2.81-second shuttle run — the fastest time recorded and a 10.81-second lane agility time, which was good for the top-10 at the combine, before wowing teams during his individual workouts ahead of the Draft.

The Sporting News’ Draft expert Kyle Irving has Daniels projected as the No. 7 overall pick, with a late swell of talk that he could climb even higher.

With the ability to guard and play multiple positions becoming a premium in today’s NBA, Daniels fits the bill as a player who despite being listed as a point guard is more than capable of playing  one through three, even spending some time at power forward with the ignite.

Growing to 6-foot-8, with a 6-foot-11 wingspan, Daniels is confident he can adapt to any situation, but he knows the thing that will get him on the court and keep him thee is his tenacious defense.

MORE: Luka Doncic is the blueprint for Dyson Daniels

“I think I have a versatile game, there are so many roles I can play in a team,” Daniels said. “My best NBA-ready skill is my defense and being able to step on the floor and guard the best player, use my size and my lateral quickness to be able to cause trouble for players. That’s definitely one of my main strengths.

There’s so many different roles that I can fit on a team, whether it be a primary playmaker or secondary playmaker, off-ball guy, I feel like I can definitely step on the floor and impact straight away.

“It’s a matter of getting in where I fit in. Whatever a team needs, whether it be a point guard or a backup, playing off the ball, I feel like there is no real weakness where you can say ‘put him here and he won’t be as good’. I just feel like I have a very balanced game that I can go into different roles. With Ignite this year I found myself starting at the one and then I found myself going to the two or three a little more and then even the four sometimes. I feel like I have that versatility.”

The Australian floor general posted 11.9 points, 7.4 rebounds, 5.1 assists, and 2.1 steals with multiple near triple-doubles for @gleagueignite. We think he’s a star, but check out his highlights and see for yourself. pic.twitter.com/tNnVX684wh

While he continues to lock in on making improvements on the court, the 19-year-old is focused on getting his body prepared for the rigors of an 82-game season.

“I’ve definitely put some size on my body, I used to be a really skinny kid, so just been on a meal plan, focusing on my nutrition, making sure I’m getting my three meals in a day plus snacks and stuff like that, so, definitely that’s been a big focus for me, and it’s still something I want to do is put on more size, fill out so making sure I get in the weight room,” Daniels added.

“Obviously, the NBA is 82 games. It’s a long season, so making sure that I get my recovery after each workout.

“It does take a toll on your body, so you do have to be prepared to be able to take the hits and get moving on to the next game, so for me, it’s about making sure I recover after each game making sure I get the right nutrition and continuing to put on size in the weight room.”

He doesn’t have to look far for advice with his good mate Josh Giddey serving as a sounding board ahead of the Draft.

“He’s been great, to pick his brain a bit sometimes, but it’s good to have him in my corner if I need to ask anything,” Daniels said.

“He’s one of my good friends. I think being able to see some similarities we have in our games, we’re both really good playmakers off the bounce, being able to make passes, finish around the rim and stuff like that.”

Daniels’ support system has helped propel him to the cusp of his NBA dreams and as he gets ready to walk the stage at Barclays Center, his family will be right by his side.

“It is very exciting for me. This process, even just having my whole family together which we haven’t had for two or three years,” Daniels said.