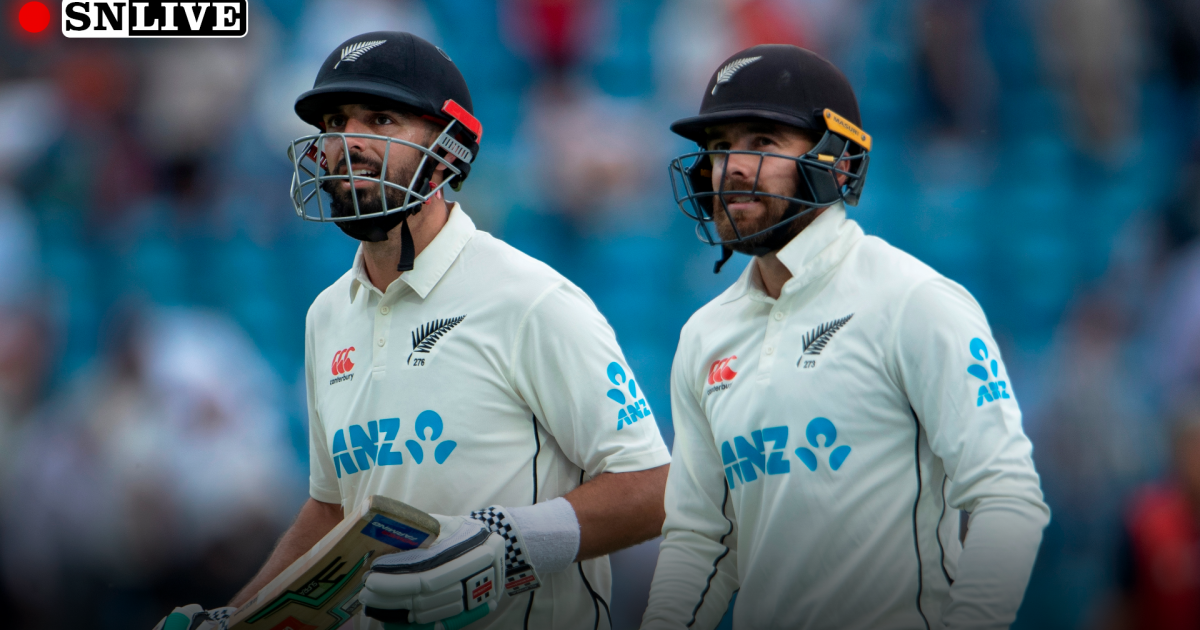 England will hope for an early breakthrough on day two after Daryl Mitchell and Tom Blundell led a New Zealand recovery in the third Test at Headingley.

The tourists slumped to 123/5 after winning the toss on a true surface in Leeds, but Mitchell (78 not out) and Blundell (45 not out) again proved to the pick of the Black Caps’ battling line-up to reach 225/5 at stumps.

Mitchell will resume eyeing a third century of the series, although he had a huge let-off when Matty Potts rapped him on the pad with an in-swinger with only eight to his name. He was given not out on the field and England elected not to review, with replays showing Mitchell would have been given out.

Blundell arrived at the crease after Henry Nicholls fell in bizarre circumstances. After a scratchy 19 off 99 deliveries, Nicholls launched a drive a Jack Leach, only for the ball to cannot off Mitchell’s bat at the non-striker’s end and loop to Alex Lees at mid-on.

Slow left-armer Leach bowled with impressive control to take 2/75 from his 30 overs on day one, while Stuart Broad (2/45) claimed the key wicket of New Zealand skipper Kane Williamson after dismissing Tom Latham for a duck in the first over of the day.

The Sporting News is following the Test and providing score updates, commentary and analysis below.

England vs. New Zealand updates, highlights and analysis from Day 2 of the 3rd Test at Headingley, morning session

There is an old – and potentially tired – adage at Headingley that you should look up and not down to see how the day’s play will pan out. The pitch that Mitchell and Blundell enjoyed themselves on yesterday evening still looks excellent but, as I can attest from a 20-minute walk up to the ground this morning, it’s very muggy indeed.

From a fast bowling point of view, with a decent amount of cloud cover, that should mean swing. The second new ball is 10 overs old and, if Broad and Potts are on the money as they were yesterday morning, then England could be in business early doors.

England vs. New Zealand updates, highlights and analysis from Day 1 of the 3rd Test at Headingley

The Sporting News will continue live day two coverage below from 11am BST on  Friday.

Despite a strong start from England, New Zealand finally came into their own courtesy of Blundell and Mitchell’s impressive century partnership with the home side struggling to find their weak points.

Matthew Potts put in an impressive bowling display despite not taking a wicket, while debutant Overton finished the day on 1-41 and will take plenty of confidence into the rest of the Test.

Stumps on day one ⏸️

Mitchell and Blundell share a 💯 partnership for the third time in three Tests 🤝#ENGvsNZ pic.twitter.com/YQwbQKBK4V

Leach’s second wicket of the day is the weirdest he’ll ever have taken, but it was certainly a welcome one as New Zealand had been digging in well following their morning struggles.

Still, Mitchell himself could have gone for just eight runs had England opted to review what looked like a clear lbw, so the cricketing gods seem to be playing fair.

The tourists need a strong final session to spare themselves a difficult task of rescuing this Test.

It was bold of New Zealand to elect to bat first after they were chased down so spectacularly in the second Test. Today’s first session suggested it wasn’t the smart choice.

With James Anderson not involved, it was Broad, his fellow elder statesmen of the England attack, who delivered a brilliant start for the hosts in the Yorkshire sunshine.

Stuart Broad dismisses Tom Latham with no runs on the board for New Zealand – what a start for England! ⚡

Five dot balls and a wicket in the opening over against the top-ranked Test side in the world was a nigh-on perfect example of the confidence with which England are playing right now.

It was also an inspiring sight for debutant Jamie Overton, who gave up 17 runs from five overs in a highly respectable morning session.

Jamie Overton, who was preferred to twin brother Craig for a place in the side, is the only alteration to the England XI, with head coach Brendon McCullum seemingly leaving behind the rotation tactics that were employed with mixed results by predecessor Chris Silverwood.

Kane Williamson was not the only New Zealand player to contract coronavirus. Devon Conway and Michael Bracewell have undergone five-day isolation periods since the Trent Bridge Test but both are fit to play. Veteran left-arm paceman Neil Wagner replaces Jamieson.

MORE: What is the highest ODI cricket score of all time? Jos Buttler inspires England to record total against the Netherlands

How to watch England vs. New Zealand: TV channel and live streaming details

UK: Sky Sports will show the series in the UK on its Sky Sports Main Event and Sky Sport Cricket channels. Subscribers can also watch online via the Sky Sports website or through the Sky Go app.

India: The Sony Sports Network has the rights to the tour, with Sony Ten 2 and Ten 2 HD showing the Test. England vs. New Zealand can also be streamed on Sony Liv.

Australia: The Fox Cricket Channel on Foxtel will show England vs. New Zealand in Australia. Fans who are not Fox customers can sign up for the Kayo Sports streaming service.

USA & Canada: Willow TV will show the action in the USA. A dedicated cricket streaming service, it is also available in Canada and can be sourced from a number of cable providers including Dish, Spectrum and Xfinity.

England vs. New Zealand score, highlights, analysis from 3rd Test as Overton eyes hundred
Obi-Wan Kenobi – Series Review
Mindy Kaling Explains Why There Isn’t One Lead on The Sex Lives of College Girls
Days of Our Lives Spoilers for the Week of 6-27-22: Hurricane Sami Causes Chaos
Should Nazem Kadri’s overtime goal have counted? Lightning lament NHL’s ‘judgment call’ after Avalanche had too many men on the ice