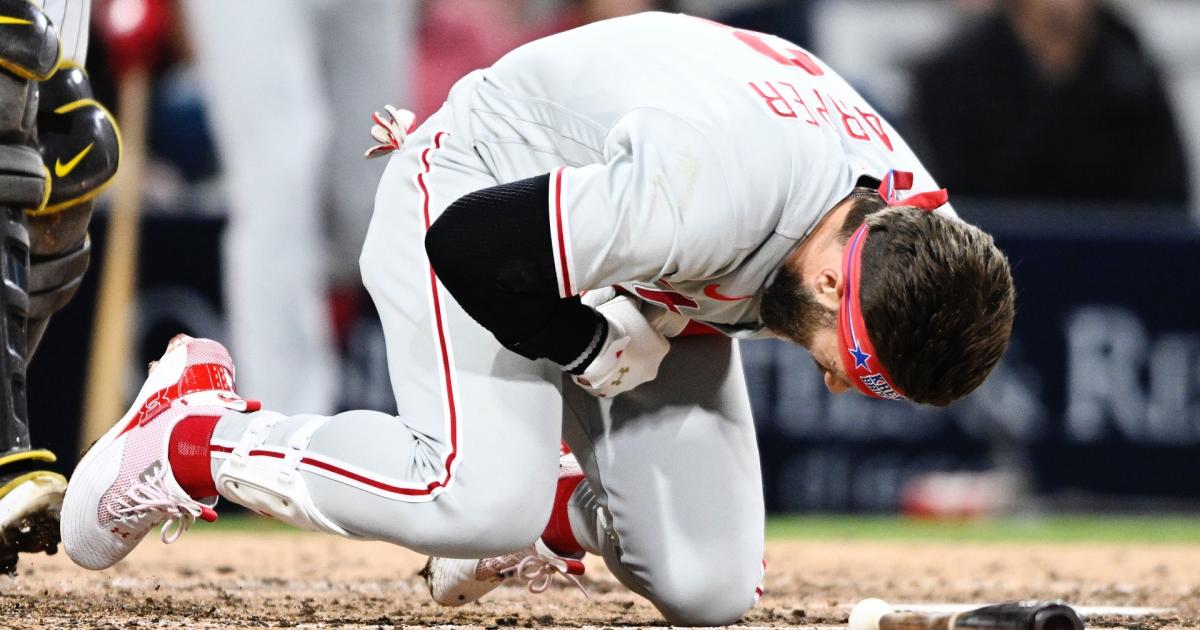 Reigning National League MVP Bryce Harper has been a force for the Phillies in 2022.

Harper was forced out of the Phillies’ clash with the Padres on Saturday night after taking an errant fastball from San Diego starter Blake Snell to the left hand in the top of the fourth inning.

Harper crumpled to the ground, holding his hand, before leaving the field.

Bryce Harper gets drilled in the hand and leaves the game! Hopefully he will be okay 🙏🙏 pic.twitter.com/Q4UVx2lyI8

The Phillies superstar is putting together another MVP-caliber season, but it appears he may be sidelined for a significant period — a major spanner in the works as Philadelphia aims to climb its way up the NL East standings.

How long is Bryce Harper expected to be out? And what impact will that have on the Phillies’ playoff chances? The Sporting News takes a look.

What is Bryce Harper’s injury?

The Phillies announced late Saturday that Harper suffered a left thumb fracture after it was hit by a Blake Snell pitch.

Phillies say it’s a left thumb fracture for Harper. He will undergo further evaluation over the coming days.

How long will Bryce Harper be out?

There’s no official timetable yet for Harper’s return. The Phillies have said only that Harper will undergo further evaluation in the next few days. The injury does, however, appear to be one that could keep Harper out until at least the All-Star break.

For comparison, Giants first baseman Brandon Belt fractured his left thumb after being hit by a pitch in late September 2021. According to The Athletic’s Andrew Baggarly, the injury took about four weeks to heal. Belt didn’t take part in San Francisco’s postseason, which ended in mid-October.

Reds first baseman Joey Votto suffered a thumb fracture last season, as well, and spent more than a month away.

Given Harper’s frustration after getting plunked by Snell, it seems his injury could keep him out of action for a lengthy period.

“I kind of wish it would have hit me in the face. I don’t break bones in my face,” Harper said after the game, per Alex Coffey of The Philadelphia Inquirer. “I can take 98 to the face but I can’t take 97 to the thumb.”

Harper was likely referring to the fastball from Cardinals left-hander Genesis Cabrera that struck him in the face in April 2021. Harper missed three games.

What does Harper’s injury mean for the Phillies?

Harper’s fracture means everything to Philadelphia. So much of the offense revolves around him. The Athletic’s Jayson Stark highlighted Harper’s offensive value.

There’s no replacing that.

That is elite production. And given Philadelphia’s struggles without Harper — the Phillies scored just five runs in three games Harper missed this week — his absence could loom large.

Harper stands head and shoulders above the rest of the Phillies’ hitters; of the six Philadelphia position players who have played in at least 50 games, only three have an OPS+ above 100 (league average): Harper, Kyle Schwarber and Rhys Hoskins.

Nick Castellanos, who signed a five-year, $100 million contract with the Phillies in the offseason, has struggled, posting a .242/.298/.379 slash line. That is a far cry from his All-Star campaign with the Reds last year.

Harper’s absence poses a serious threat to Philadelphia’s playoff chances. The Phillies are nine games back of the division-leading Mets and four games behind the second-place Braves.

When healthy, Harper is one of the league’s most fearsome hitters. But he has dealt with multiple injuries in his career. The most serious was the knee injury he suffered in 2017. It derailed what could have been another MVP campaign.

Harper missed 21 games in 2021, mostly because of a forearm injury he suffered in late May that pushed him to the 10-day injured list. Beyond that, he dealt with an assortment of day-to-day injuries.

This year, he suffered a UCL tear in his throwing elbow which forced him to become a full-time designated hitter.