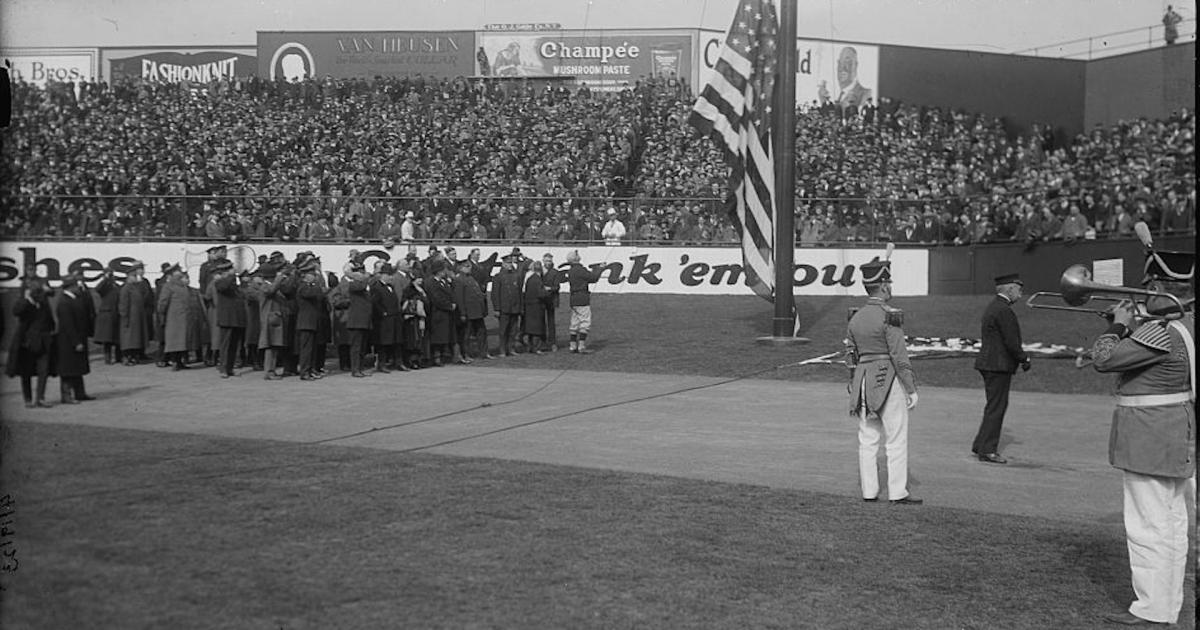 This story first appeared in the April 26, 1923, issue of The Sporting News, under the triple headline “Everything Combines To Make Yankees’ Opener Glorious; Greatest Crowd Ever At A Ball Game; Ruth Gives Occasion Climax by Hitting Homer That Rouses 74,000 to Frenzy of Enthusiasm”. “Some ball park,” Babe Ruth would say after his home run won the opener on April 18, 1923, at “the Yankee Stadium,” as it was know then. Soon, TSN contributor Fred Lieb would dub the more than $2 million cathedral of baseball “the House that Ruth Built.”

NEW YORK, N.Y., April 23 — Nearly 42,000 paid admissions and 14,000 dead-beats. When the magnificent opening of the Yankee Stadium had passed into baseball history last Wednesday. Business Manager Edward Grant Barrow of the New York American League club announced that 74,217 patrons had passed through the turnstiles and had seen the home team top the Boston Red Sox, 4 to 1. The crowd, clearly the greatest that ever saw a baseball game, either professional or amateur, exceeded the fondest hopes of the Yankee officials.

Not less than 12,000 free invitations had been sent out for the inaugural and those, with the addition of season tickets and passes, assured a respectable gathering. The New York Club owners expected about 40,000 fans and up to the last moment kept telling the newspapers that there would be enough room for everybody. But before the first inning had been completed, the fire department ordered the gates closed and left 15,000 late comers outside the huge structure.

Six thousand automobiles were parked in the neighboring streets and open lots. Three hundred coppers with patrol wagons and ambulances were on duty. Two hundred special policemen and 300 ushers were busy inside the stadium, which began to populate as early as 11 o’clock in the morning. By noontime, when those on the Lexington Avenue express trains, each of 10 cars, began to roll into the 161st Street station and posted to the doors, the Yankee Colonels realized that dreams do come true. At two o’clock, 40,000 fans had arrived and from then on until the gates were locked the crowd fairly overran the big place and proved beyond doubt that the national game still is very much alive.

Led by John Philip Sousa, the Seventh Regiment Band showed the way to the lofty flag pole in deep center field, where the rival managers, Miller Huggins and Frank Chance, hoisted Old Glory to the top. Then the Yankees’ 1922 pennant was hung to the breeze and with noisy cheers from more than 74,000 throats, the skippers headed back to the home plate, followed by the New York and Boston players and various dignitaries, including Governor Al Smith, who received an ovation, Commissioner Landis, Colonels Ruppert and Huston, and Harry Frazee. President Ban Johnson of the American League was ill at his home in Chicago and missed the biggest event of his life. In the grand stand as spectators were President Stoneham and Treasurer McQuade of the Giants, President Mathewson and Vice-president Fuchs of the Boston Braves, Treasurer McKeever of the Brooklyns and many other baseball men.

The record crowd had been orderly handled and the S.R.O. signs had been hung up when the fire department stopped the convening mob outside and the game started.

Robert Shawkey was pitted against Howard Ehmke, with the game in charge of the umpires, Tom Cassidy, Bill Evans and Howard Haines.

Shawkey was in mid-summer form. He controlled his smoke ball delivery with expert skill and put the Beaneaters down with three safe hits. Ehmke, too, pitched cleverly with the exception of one inning, when with two men on Ruth caught a slow, waist ball on the end of the bat and lined it into the right field bleachers for his first home run of the year.

Crowd Shows Where Its Heart Is

The moment Ruth’s drive landed among the bleacher spectators, the crowd went mad. Hats, canes and umbrellas were were thrown up and a tremendous volley of cheers greeted the smiling Bambino as he trotted around the circuit. Ruth needed just such an outburst of joy to swell his chest with pride. He had been in the dumps as a result of rather feeble hitting on the training trip and evidently was growing nervous. So when he jumped the old apple into the yawning and conveniently located stand for a jog around the bases he found himself a hero once more and was happy.

Ruth’s four-bagger decided the issue then and there, for the other Yankees could do little or nothing with either Ehmke or Fullerton. But the real factor in the New York team’s triumph was Shawkey, who didn’t get a hand-clap for his brilliant work. It mattered not that nine other home runs were knocked out in the major league games last Tuesday, Ruth’s circuit wallop was the big noise and the columns were printed about it the next day. All of which proves that the distinguished Babe hasn’t been extinguished yet, although many things may happen between now and the end of September. — Joe Vila

Editor’s note: In the May 31, 1923, issue of The Sporting News a story ran on Page 1 that read, in part: “It appears that the attendance record of 74,217 on opening day at the new stadium of the New York Yankees, as well as other published record attendances of that commodious new park, will to be revised. It seems that the actual capacity of the Yankee Stadium is but 62,000 with standing room for a few thousands of spectators only.” The story said the discrepancy between claimed and actual capacities was discovered during a boxing event at the stadium, noting that “Even with only 62,000 seating capacity the Yankee Stadium will still be the world’s largest baseball park.”