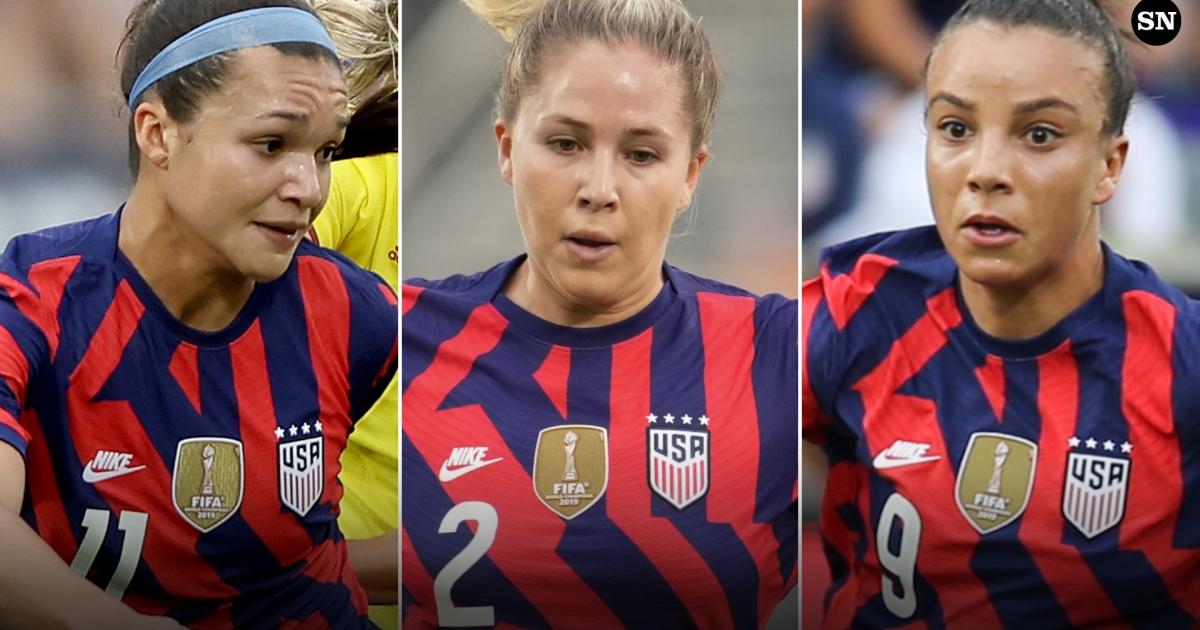 In what once was a plan and now is a dream, young Catarina Macario would have taken the field Saturday night at Dick’s Sporting Goods Park in suburban Denver and shown fans of the United States women’s national team what the next generation of World Cup contenders looks like.

Instead, she spent the evening continuing to recover from a torn knee ligament suffered in early June and the USWNT began its World Cup qualifying preparation with a 3-0 friendly victory over Colombia that included almost no threat from the opposition but still plenty of frustration for the Americans.

The final statistics showed Colombia possessed the ball only 28 percent of the time, and that felt like a numerical exaggeration. The Colombians managed only a single shot, none on goal, and did not attempt a corner kick.

But it took the U.S. more than 50 minutes to produce an opening goal. There were a few chances early, but only a failed penalty attempt by veteran midfielder Lindsey Horan represented a clear opportunity to score.

The USWNT will play once more against Colombia, Tuesday in Utah, before departing for Mexico and the July 4 opening of the Concacaf W Championship tournament that will qualify teams for the 2023 FIFA Women’s World Cup and 2024 Olympic games.

Here’s whose stock rose and fell through the first 90 minutes of tournament prep.

MORE: Why the USWNT struggled to score against Colombia

In six games for the USWNT this calendar year, Smith has scored five goals. That’s the kind of math fans love, although it must be noted that three of those came in a 9-0 win against overmatched Uzbekistan.

Her two goals in this game, though, were vital. Colombia is not the sort of opponent the Americans would face in the late stages of a major tournament, but the strategy they presented was entirely designed to produce a 0-0 draw, something the Czech Republic managed against this U.S. team back in February.

The USWNT needed someone to create scoring opportunities by tearing open space with speed and/or quickness, and that’s what Smith did.

Andonovski flipped Smith and Pugh from one side to the other on multiple occasions, and Smith was able to score from both the left (the first goal, on which she overpowered the goalkeeper) and the right (a cleaner finish, placed beautifully inside the left post).

“I think the biggest thing was to remain calm and not to panic,” Smith told Fox Sports afterward. “We knew that once we put one away they would keep coming, and we just had to stay consistent and continue creating pressure and creating chances.”

When is the last time we saw Lavelle dominate a game to this degree? Is it fair to say not since 2019, when she scored in the FIFA Women’s World Cup final and was named one of the top three players in the tournament?

Her searing, inch-perfect passes set up each of the first two goals, sizzling along the DSG Park grass and through the Colombia defense to find Smith in stride. They were the sort of plays we’d seen regularly from Lavelle in France as she became, at 24, the breakout star of the fourth U.S. World Cup championship.

Lavelle also created a beautiful scoring chance for herself in the first half, cutting back to clear space in what was, all evening, a teeming crowd around the top of the box.

If she hadn’t been assigned to attempt the penalty kick Alex Morgan earned in the 65th minute, it would have been a perfect evening for Lavelle. But she was, and her shot to the goalkeeper’s right was not struck sharply enough, allowing for a terrific save.

The U.S. still might need to be careful managing Lavelle’s minutes in a tournament situation. She has been injured multiple times in her career and never has played a full dozen games in four prior NWSL seasons, though she is trending toward that this season, with eight starts in nine OL Reign games. It’s obvious Andonovski will need her on the field as much as possible.

MORE: How to watch the June 28 match between USWNT and Colombia

Sanchez took the place of veteran midfielder Lindsey Horan at halftime, and it was not at all a coincidence the U.S. attack was entirely transformed. Horan, coming off a vacation that followed a Champions League triumph with Lyon, lacked the authority she typically brings to a game. That’s hardly a crisis under the circumstances.

But Sanchez showed that if Horan is unavailable or diminished for any reason, she can be an excellent replacement. In the 54th minute, she fought for a tough header beyond midfield that she was able to direct toward Lavelle, who then dribbled into space before launching the ball down the left seam to Smith. They were credited with the assist and the goal, but that play could not have occurred without Sanchez’s key contribution.

“I think that Ashley Sanchez was one of the main reasons we got a little more sophisticated in the second half,” Andonovski said after the match. “She was able to eliminate players on the dribble, and she was able to connect well with the players around her. She also asked different questions from the defenders.”

One middling game is not going to knock Pugh out of a lineup that is built around the danger she and Smith can provide. But we saw in a substitute appearance from Megan Rapinoe that lasted fewer than 20 minutes how important service — in open play and especially set pieces — can be.

Pugh was assigned to corner kick duty until she left the game in the 77th minute, and her deliveries never threatened. Soon after replacing Pugh, Rapinoe earned a foul just outside the penalty area and barely put the free kick wide, splashing it off the side netting. In the first minute of added time, Rapinoe dropped a cross right in front of goal, where newcomer Taylor Kornieck got a sharp header onto it and recorded her first international goal in her first cap.

Rapinoe’s set-piece ability was essential to the USWNT surviving the gauntlet of great European teams they faced during the knockout stages in France 2019. Is it necessary for the team to win in the same way when the games get serious, either in Mexico next month or, presumably, Australia next summer? Maybe not. But it would be nice to have the option.

MORE: More on the injury keeping Catarina Macario out of USWNT action

There seems little doubt Andonovski would love for Hatch to seize the central position on the three-player forward line, and make it her own, given the significant vacancy Macario has left. This was obvious when Hatch was granted this start even though Morgan has been the most dominant player in the NWSL since joining the expansion San Diego Wave this season.

Hatch was tremendous for the Washington Spirit in their 2021 championship season, scoring 10 goals in 20 starts. She is five years younger and can bring more verve to the position at this stage. But it wasn’t there against Colombia and, with fewer than 10 caps, she does not have a track record that indicates such performances are inevitable if given enough opportunities.

Morgan was livelier in her substitute performance and did earn the penalty that Lavelle failed to convert. She helped draw the defense away from Kornieck on the injury-time goal, with both players making similar near-post runs.

If Hatch could find a way to become more involved in build-up play or creating space against a packed-in defense or posing a finishing threat, it would be a tremendous luxury to have Morgan as a super-sub when the team is chasing a goal. But that didn’t happen here.

It will be fascinating to see what Andonovski does with this position in the Tuesday game against Colombia. Will he examine what a revived Morgan looks like between Smith and Pugh? Or does he see if Hatch can find her way into a prominent role?

Christian Slater Sells Miami Home After Only 3 Days On The Market
12 Stylish Zodiac Jewelry Pieces to Shop Under $100
14 Sparkly Shoes That Will Liven Up Any Outfit
Kevin Durant shuts down retirement rumor amidst trade drama with Nets
Premier League MVP, matchday two: Gabriel Jesus provides the magic for Arsenal on his home debut