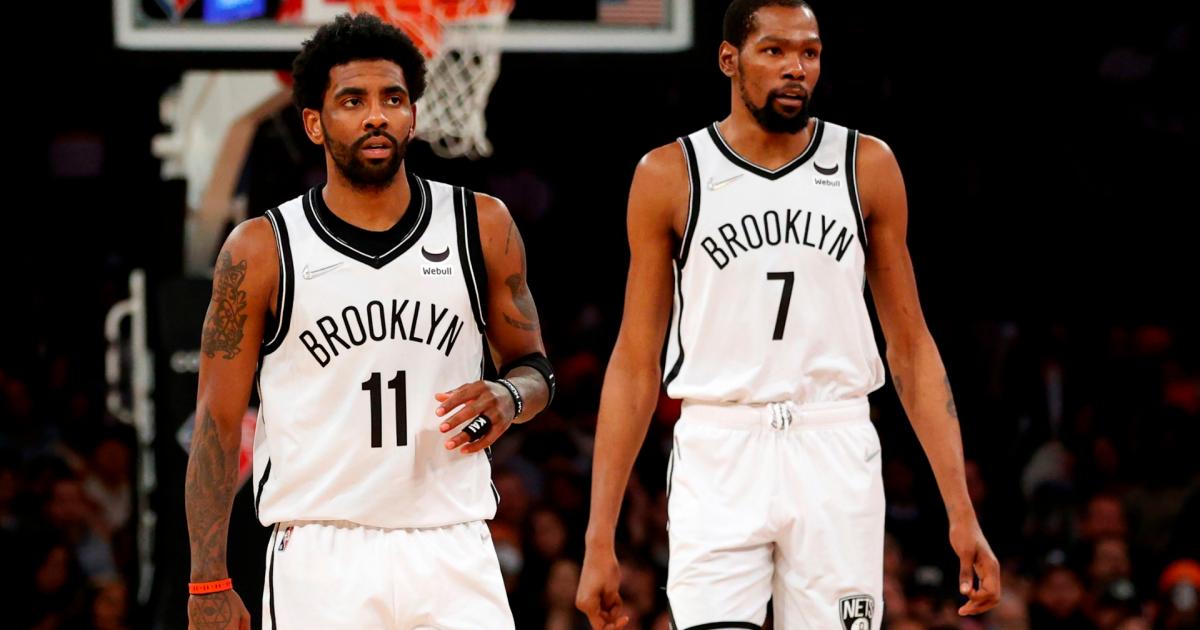 Very few athletes have ever been as unpredictable as Kyrie Irving. He’s always been a bit of a wild card.

The Nets star guard created an earthquake among the NBA world last week when it was reported that he and Brooklyn’s front office were at an “impasse” that could “clear the way for him to test the open marketplace.” Irving even had a list of teams he would consider in sign-and-trade scenarios, with the Lakers, Clippers, Knicks, Heat, Mavericks and 76ers all being mentioned.

That led to a report that his star teammate, Kevin Durant, was “considering options with his future” if Irving left Brooklyn, sending NBA stakeholders into a frenzy.

On Monday, just days ahead of free agency, those rumors seemingly began to materialize when reports indicated  Irving had requested and received approval from the Nets’ front office to seek sign-and-trade scenarios, offering him a chance to move on. His departure became even more likely when it was reported that he would consider opting out of his contract completely and had a willingness to take less money to sign with the Lakers.

And just hours later, all of that chaos appears to be for nothing when The Athletic’s Shams Charania reported Irving will opt into the final year of his contract to remain in Brooklyn.

How did Irving land on this decision? Here’s everything we know below.

Why did Kyrie Irving opt into contract with Nets?

The Athletic’s Shams Charania reported Irving will opt into his $37 million player option for the 2022-23 season. “Irving is bypassing on multiple opt-in and trade scenarios to fulfill his four-year commitment to the Nets and Kevin Durant.”

Brooklyn Nets star Kyrie Irving is opting into his $37 million player option for the 2022-23 season, @TheAthletic @Stadium has learned. Irving is bypassing on multiple opt-in and trade scenarios to fulfill his four-year commitment to the Nets and Kevin Durant.

Normal people keep the world going, but those who dare to be different lead us into tomorrow. I’ve made my decision to opt in. See you in the fall. A11even.

What’s next for Kyrie Irving?

According to ESPN’s Adrian Wojnarowski and Bobby Marks, Irving has until Wednesday (June 29) at 5 p.m. ET to file the paperwork on his opt-in or become unrestricted free agent.

Wojnarowski added, “The Nets can still move Irving as an expiring contract, but the opt-in means he’s no longer eligible to get the immediate long-term deal he wanted as part of a sign-and-trade.”

With that being said, a trade isn’t completely off the board, as Marks added, “By opting-in, Irving is eligible to be traded to any of the 29 teams and hard cap restriction does not apply.”

There is no moratorium in which the Nets would have to wait to trade Irving.

While Irving says he is committed to the Nets for next season, those notes are important that a trade could still logistically happen.

Why Kyrie Irving to the Lakers didn’t/couldn’t happen

It’s simple. There was no deal to be done that worked for all parties. Wojnarowski indicated in his report on Irving opting in that it happened “without the ability to find a sign-and-trade deal.”

There was no path for the Lakers and the Nets to make a deal with one of the teams, or Irving himself, having to make a big concession.

The Lakers don’t have the cap space to absorb Irving via a sign-and-trade. Therefore, they’d have to move a large piece, like Russell Westbrook, which the Nets didn’t want.

So, with the inability to execute a sign-and-trade, Irving would have had to opt out of his contract and sign with the Lakers at a HUGE pay cut.

How much of a pay cut?

Irving could have become an unrestricted free agent and signed a $6M tax-payers exception with the Lakers, which was a pipe dream option for the Lakers and its fans.

By reportedly opting into the final year of his deal, Irving is set to make $36.5 million next season and he will become an unrestricted free agent in 2023 if no further contract extension is signed.

(All numbers according to Spotrac.)

Lizzo Dances in a Vibrant Yitty Onesie on Instagram
Eighty-five years on, Stella Dallas remains a style icon
Bryant Young gives emotional tribute to son Colby in Hall of Fame induction speech: ‘You live on in our hearts’
Kavan Smith on Big Sky River’s Beauty and Subtle Storytelling, Lee and Rosemary’s Next Adventure on WCTH
Beyoncé Appears to Remove Kelis Sample From Renaissance Album Amid Controversy