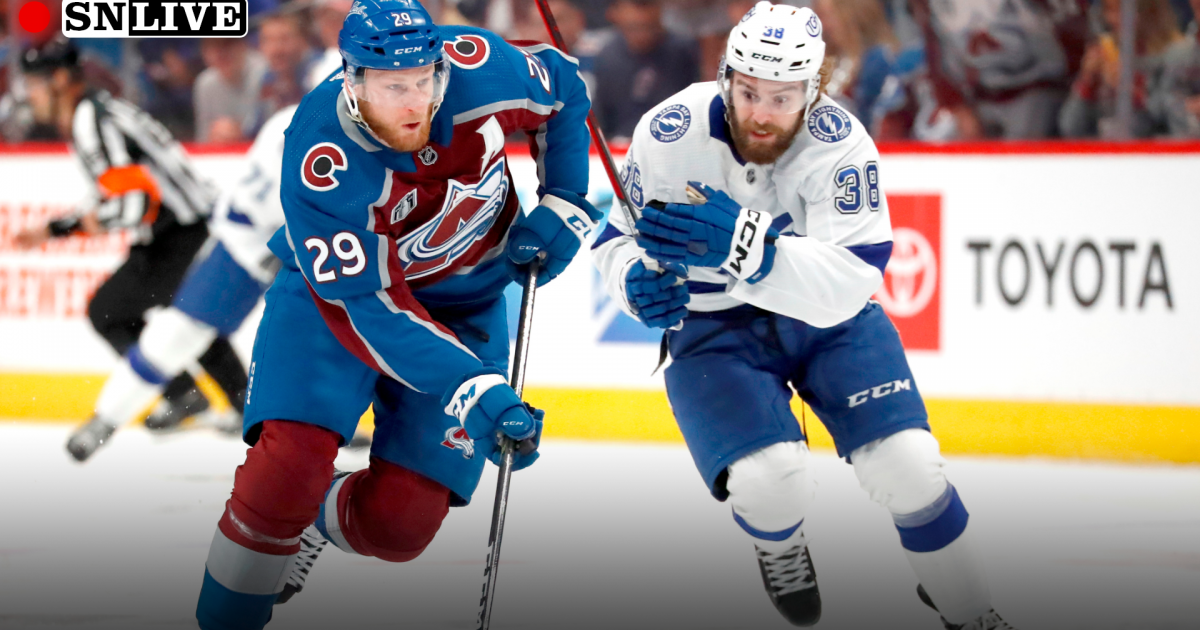 The Avalanche had a chance to clinch the Stanley Cup championship at home Friday night, but were unable to do so. The Lightning earned a 3-2 win in Game 5 to keep the series alive.

Ondrej Palat’s tally with 6:22 left in the third proved to be the game-winner. Tampa Bay held on for the victory to force a Game 6.

Mikko Rantanen admitted that Colorado felt the nerves and the pressure ahead of Game 5 with a chance to win the Cup, but said he that the team won’t make the same mistake twice.

“Everybody can say there’s not, but everybody had a little nerves since it was the first time (with a chance to clinch),” Rantanen said Sunday morning. “The second time is going to be easier. We’ve been quick learners the whole postseason after losses.”

The Avalanche will have another crack at clinching a Cup win as the teams battle for the last time in Tampa. The sides split Games 3 and 4 at Amalie Arena. The Lightning are aiming to force a Game 7, which would take place Tuesday night in Denver.

The Sporting News will provide live updates and highlights from Game 6 of the Stanley Cup Final (all times Eastern).

9:52 p.m.: The Avs grab two goals in the second period to take the lead. A much better period out of Colorado as they are able to frustrate Tampa Bay and get the team off their game. Only 20 minutes left potentially between the Avalanche and the Stanley Cup.

9:49 p.m.: That was a huge penalty kill by the Lightning. Now they need to reset and get back to their game after losing the lead.

9:43 p.m.: Ryan McDonagh is going to sit after a clear-cut boarding goal. You could see that one coming, the Lightning are a team playing pissed off after a few non-calls on the Avalanche. But that was stupid by McDonagh and now the dangerous Colorado power play goes to work.

9:35 p.m.: GOAL! The Avs have their first lead of the game, as Lehkonen buries a shot off a 3 on 2. The puck was bouncing around after an attempted move by MacKinnon and it went right to the Avs winger who buried it past Vasilevskiy on the glove side. It’s 2-1 Avs with 7:32 left in the second. Some extracurriculars after the whistle as well as Maroon gets away with a pretty hefty two-handed slash, the Lightning were not happy with a non-call as Manson tripped up Bellemarre before the rush.

9:24 p.m.: The Lightning have answered after the MacKinnon with a few strong shifts and sustained offensive zone pressure, but haven’t been able to get a second puck behind Kuemper. A particularly strong shift out of the Stamkos-Kucherov-Palat line.

9:15 p.m.: GOAL! The Avalanche are on the board. The Lightning fail to get the puck out and moments later, Bowen Byram finds Nathan MacKinnon for the one-time goal that beats Vasilevskiy short side. It’s a tie game 1:54 into the game.

8:52 p.m.: After 20 minutes, the Lightning lead 1-0. A great start for Tampa Bay results in a goal, but the Avs settle in after the first five minutes and had some solid chances. Colorado was inches away from tying it on the play from Rantanen to Lehkonen. The period felt more physical than normal, which I think plays into Tampa’s hands more. Shots were 10-7 in favor of the Bolts.

8:41 p.m.: Scratch the Kadri chance. Mikko Rantanen makes a heck of a play falling to pass the puck behind him to Artturi Lehkonen alone on the backdoor, but his tip-in attempt hits the post. The Avs have been the better team for most of the period.

8:37 p.m.: Best chance of the period for the Avs comes from Nazem Kadri, who deflects a shot from the point on net, but Vasilevskiy keeps it out. Under six minutes to go in the period, still 1-0 Lightning.

8:33 p.m.: Strong response for Colorado after the Stamkos goal, they’ve have more pressure and chances in the offensive zone for the last five minutes or so. But nothing by Vasilevskiy yet.

8:25 p.m.: GOAL! The relentless forecheck by the Lightning results in a goal for Steven Stamkos. He’s left alone to the side of the net, gets the loose puck and goes five-hole on Kuemper. It’s 1-0 Lightning 3:48 into the game.

8:22 p.m.: Wasted opportunity for the Lightning as Makar is out. No shots on the man advantage for Tampa Bay.

8:20 p.m.: Early power for the Lightning as Cale Makar is called for interference just 23 seconds in. Not the start Colorado was looking for and a great chance early for Tamp Bay.

7:47 p.m.: Nichushkin is in for the Avs. He’s been one of their best players of the series, so he would have been a major loss.

7 p.m.: A couple of injury notices on both sides heading into Game 6. Brayden Point has been ruled out for the fourth consecutive game in the finals. Jon Cooper rolls out the same crew as he has in Games 3 through 5 with Riley Nash entering the lineup as the 12th forward. For the Avs, both Valeri Nichushkin and Andre Burakovsky will be game-time decisions. Burakovsky has been out since leaving Game 2 with a hand injury. NIchushkin is dealing with a lower-body injury he suffered in Game 5.

Jon Cooper said an issue with Brayden Point is being effective enough. “If they don’t feel confident in playing at the caliber they’re used to, it almost works against them. It’s unfortunate because it’s a severe injury.” Cooper didn’t rule Point out for Game 7. “Who knows?”

Game 6 of the Stanley Cup Final between the Avalanche and Lightning will be broadcast on ABC in the United States and Sportsnet in Canada.

Tampa Bay and Colorado go head-to-head in Game 6 on Sunday, June 26. Puck drop will be shortly after 8 p.m. ET at Amalie Arena in Tampa