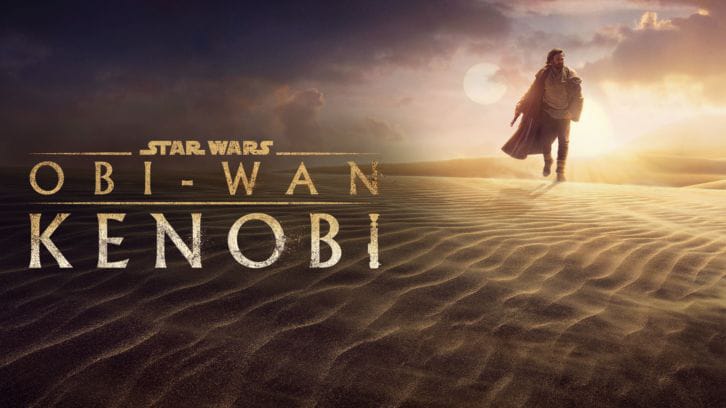 While the saying may be true that one can never really go home again, it doesn’t mean that you can’t take some of home with you or that you won’t find pieces of it on your journey. At it’s core, that is what Dsiney+’s limited series, Obi-Wan Kenobi is, taking a small story of an iconic legacy character that is transitioning between the past and the future in a mostly familiar way.

Set ten years after Revenge of the Sith, Obi-Wan (Ewan McGregor) now just called “Ben” finds himself an isolated and broken man, cut off from the Force with little to no hope, as he spends his days cutting up fish meat in Anchorhead on the desert sands of Tatooine, while also overseeing one of galaxy’s most precious future-commodities, Luke Skywalker (Grant Freely). 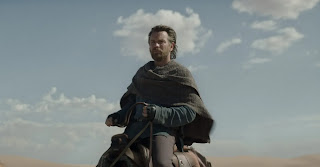 But while it’s first episode spends a great deal of time meditating on the daily life of Obi-Wan, it doesn’t take long for conflict to come to Tatooine in the form of the ruthless Inquisitors, dark-sided force users under the service of Darth Vader (Hyden Christianson, James Earl Jones) and the Empire tasked with hunting down remaining Jedi or other Force Users for various nefarious purposes, who have all but perished after the events of Revenge of the Sith. 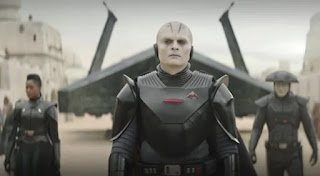 Star Wars: Rebels fans will no doubt be amused (for better or worse) at seeing the Grand Inquisitor (Rupert Friend) and the Fifth Brother (Sung Kang) make their live-action debuts, but the stand-out Third Sister (Moses Ingram) is brand new and is used as an interesting reflection point to the over all transitions of Anakin Skywalker to Vader and back again, and beyond…

Nari didn’t yield any additional results. Obi-Wan let’s Nari die for the sake of Luke, but The Third Sister’s hunch that Obi-Wan was once close with Senator Bail Organa and that kidnapping his young daughter might just bring Obi-Wan out of the shadows, was no doubt a good one! 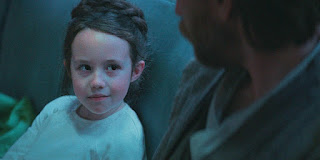 Young Princess Leia played by Vivien Lyra Blair flips the script on what might of seemed like a Luke Skywalker story, but the young actress is the perfect way to give this story more credence not only to characters of the past like Anakin or Padme’, who Obi-Wan no doubt relates deeply too, but really in a lot of respects she’s a fantastic love letter to both A New Hope & to Carrie Fisher’s overall Star Wars’ legacy; and is honestly reason enough to substantiate Disney’s choice to bring ‘Obi-Wan’ into existence.

Episode two is set on a new planet called Daiyu and calls Obi-Wan to action in saving Leia from some flea-bagged scum. It makes him begin to take stalk of what has been happening in the Galaxy, but also a reminder of what he lost and what is still at stake! Throughout much of the episode, Obi-Wan is a bit in doubt, as Leia turns out to be a bit of a handful and Obi-Wan misjudges a Jedi con-man (Kumail Nanjiana). But things are not all as they seem, yes The Third Sister is hot on Obi-Wan’s trail, but being with Leia begins to awaken a deeper sense of purpose in Obi-Wan, which is furthered by Obi-Wan being being forced to use The Force, and then later, the con-man helping them both escape! 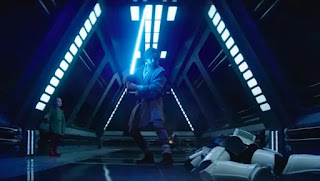 It’s not really until the end of episode three into episode four that Obi-Wan goes from a defensive to offensive position, but it’s this transition with Leia being kidnapped and taken to Fortress Inquisitress that transforms Obi-Wan closer to the Jedi that he once was, now learning the truth about Anakin, and having to confront him for the first time in 10 years!

The last two episodes more heavily drive home a final confrontation that includes flashbacks to Anakin practicing his lightsaber technique with Obi-Wan, as Vader’s obsession with his former master threatens to finally get Leia home, while also giving this pre-Rebellion a fighting chance for survival, along with the fact that Reva has figured out Obi-Wan’s secret and is hot on young Luke Skywalker’s trail!! 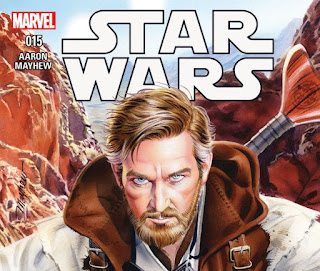 While the series almost effortlessly bridges to the entire Skywalker Saga together along with various cartoon tv series, video games, and even some comics together, it’s really the sequel trilogy, particularly The Last Jedi that rings through the deeper subtext of Obi-Wan’s over all narrative. Leia & Reva in particular act as strong through lines to Kylo Ren/Ben Solo & Rey, who both reflect Anakin and Darth Vader, with Anakins whole journey serving as a figurative ghost looming over the sequel trilogy.  For Obi-Wan, this was a story about a renewed sense of hope & purpose, by confronting the past, and realizing there can be a better future! 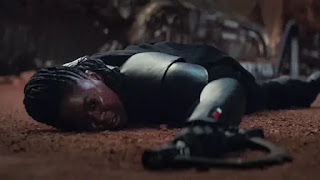 The new character Reva/The Third Sister adds something a little more fresh, however. The plot twists with Reva’s motivations and choices are compelling and unique, because for the first times within The Skywalker Saga has there now been a gray force-sensitive character out for revenge AND justice, spending years and years trying to get close enough to Vader to kill him, to then almost killing his son, but who has a chance to redeem herself without succumbing to death, but also doing so with the blessing of a restored Jedi in toe! This is a character the franchise should absolutely capitalize on, obviously taking pages from Knights of the Old Republic (Reva is named out of universe for Revan and coincidentally is “Vader” re-arranged minus a “d”) and/or even parts of the old EU! 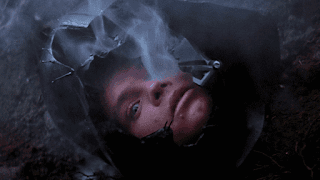 As for the visuals, much like the plots, many elements or concepts were borrowed from previous works, but in a way we haven’t quite seen before. The Mandalorian absolutely started to pave the way for cartoon characters to debut in live action and picking up slightly different flavors of The Galaxy Far Far Away in any given episode, while also too connecting to the bigger Skywalker Saga Epic, but ‘Obi-Wan’ tends to go further by blending scenery together, where in some instances, night time fighting scenes and lightsaber colors tend to immolate parts of the sequel trilogy, but yet there is a sense of gritty realism in rocky terrain and hazy atmosphere that is reminiscent to scenes like Luke on Ahch-To in The Last Jedi or various scenes in Rogue One: A Star Wars Story. And while there are also plenty of cameos, they feel natural and necessary and never used in an over the top kind of way. There are not a lot of aliens or creatures either, and one might argue that ‘Obi-Wan’s’ overall look and choices in using more “human” characters is a reflection for the kind of story Obi-Wan Kenobi is, which is not a huge epic, but rather a more intimate portrayal of a human man coming to terms with the loss of brotherhood (and what that cost the galaxy) and finding the motivation to confront it, and move past it! That’s not to say that it didn’t also include more traditional flashy and polished scenes seen in entries episodes 1-9 such as episode four’s Fortress Inquisitrous or episode two’s  nio noir cityscape of Daiyu, but it wasn’t steady fast and a lot of the episodes tended to feature more grounded and earthy scapes. –And, in some ways, one could argue the back and fourth between styles reflects the upbringing of Luke & Leia respectively along with the life Obi-Wan once had and the life he had resided to prior to the series. 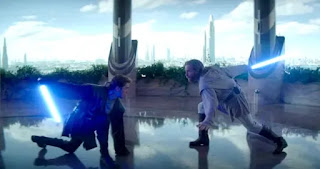 Those who went into Obi-Wan Kenobi thinking it would be an exceptionally groundbreaking endeavor would be sorely mistaken. After all, the nature of where this series is set and the legacy characters featured only allow the canon to be stretched so far and really was never the point of this. We all know the outcomes of main characters, say for Reva, so it wasn’t about stakes or suspense. It was instead a little treat nestled into a mostly complete known story, allowing us a chance to get another glimpse at actors, voices, or characters of this particular Saga once seemingly long gone to the audience, during a time where they have or are transitioning.

But curiously, the series doesn’t tie up it’s loose ends, instead it leaves the door open for more, as Obi-Wan, who at last has the guidance of his old master, is in a new frame of mind, seemingly ready for other mini-adventures, while Reva too is left blowing in the wind without knowing if and how she may try to redeem herself. Obi-Wan is now allowed to occasionally see Luke, who didn’t get much of a story here, but that might be for the better…

But in truth to have an actual second season, Disney would wise to keep Darth Vader and Obi-Wan at a good distance, but that also means that there needs to be some kind of new focus, such as an Obi-Wan relative (something that was mentioned in episode 3), a Grogu prequel where he needs “relocated”, or even using the top brass of criminal organizations Crimson Dawn and/or The Hutts to drive some other kind of story. 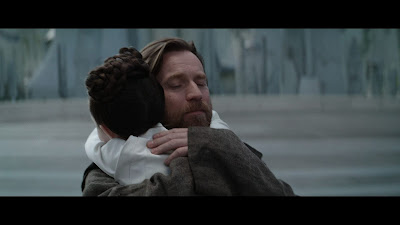 Overall Obi-Wan Kenobi is an amicalble heartwarming little treat that wasn’t necessarily needed, but acts as a final love-letter bridging many parts of the Skywalker Saga together in some new and interesting ways, using some of it’s best characters to do so one last time before Disney begins to step out of it’s shadow. I would be cautiously optimistic in wanting a second season or even a Reva spin-off, but I’m also a viewer who is ready to step a little more into the unknown. Luckily we live at a time where we can have both, as Disney is starting to pump out more and more Star Wars content for various kinds of fans every year! I’m excited to see what all comes next!! May the Force Be With You!
This article was originally published by Spoilertv.com. Read the original article here.
Share on Facebook
Share on Twitter
Share on Pinterest
Share on LinkedIn

Tales of The Walking Dead – Evie/Joe – Review
Kid Cudi Shares He Suffered Stroke During Rehab in 2016
Sunisa Lee Has a ’90s Moment in a Crop Top and Cargo Pants
Bob Odenkirk Thanks Fans and Co-Stars in Emotional Video Following Better Call Saul Finale
This Bikini Is So Comfortable, I Can’t Stop Wearing It