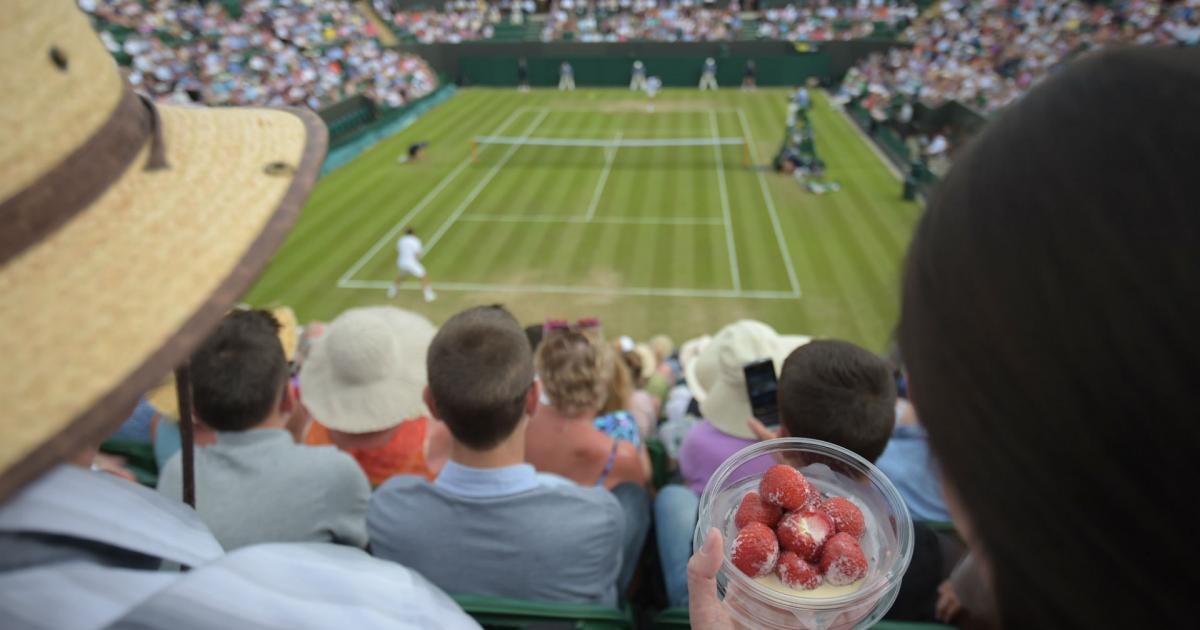 Restaurants and food and drink stalls are ubiquitous around the show courts at Wimbledon, which organisers say requires the largest catering operation of any event in Europe.

While champagne is a popular choice at the summer Grand Slam, Pimm’s is just as in-demand and as much a tradition of the tournament as strawberries and cream.

Almost 191,000 portions of the snack are said to be served during the championships, eclipsed by more than 276,000 glasses of Pimm’s.

Why are the items on the menu and how long have they been Wimbledon favourites? Digest some of the story courtesy of The Sporting News.

Here’s to enjoying a Pimm’s whilst soaking up the atmosphere on The Hill. ☀️ #Wimbledon #BringonPimmsOClock #WeWillSummer pic.twitter.com/x6uNMGAiAc

Why do fans at Wimbledon eat strawberries and cream?

The delicacy is said to have been served at the first ever edition of Wimbledon in 1877, when only 200 fans were in attendance.

The origins of the treat, though, are thought to date back to King Henry VIII’s Lord Chancellor, Cardinal Thomas Wolsey, during the early 16th century.

When the King and court visited Wolsey’s home at Hampton Court — only around ten miles from Wimbledon — the chancellor’s cook is said to have served wild strawberries and cream as one dessert at the banquet.

The combination gained popularity because the King ate it, according to the All Things Georgian blog, and the tradition endured through the centuries that followed.

The strawberries at Wimbledon are picked in Kent at dawn before being delivered to the grounds in south London. Portions cost £2.50 at the 2021 championships.

According to organisers, the 2022 tournament “will see an enhanced strawberries & cream offer on the famous Tea Lawn. Featuring a timeline of the very important berries journey to The Championships”.

Why is Pimm’s popular at Wimbledon?

A refreshing, cool summer drink that is 25 percent alcohol, Pimm’s can contain a slice of strawberry as part of a garnish also comprising mint, cucumber and apple.

The tipple suits strawberries and cream well, as the thousands of visitors to the tournament would testify, the first Pimm’s bar having appeared at the venue in 1971 and remained a fan favourite ever since.

Pimm’s was first produced as a gin-based beverage by James Pimm and then sold at his London Oyster Bar in 1840. Variations on a Pimm’s cocktail have developed over the decades at Wimbledon and more than 280,000 glasses were consumed at the 2016 tournament.

Vodka and brandy versions and a cider — flavours include strawberry and cucumber and summer fruits — have been introduced in recent years.