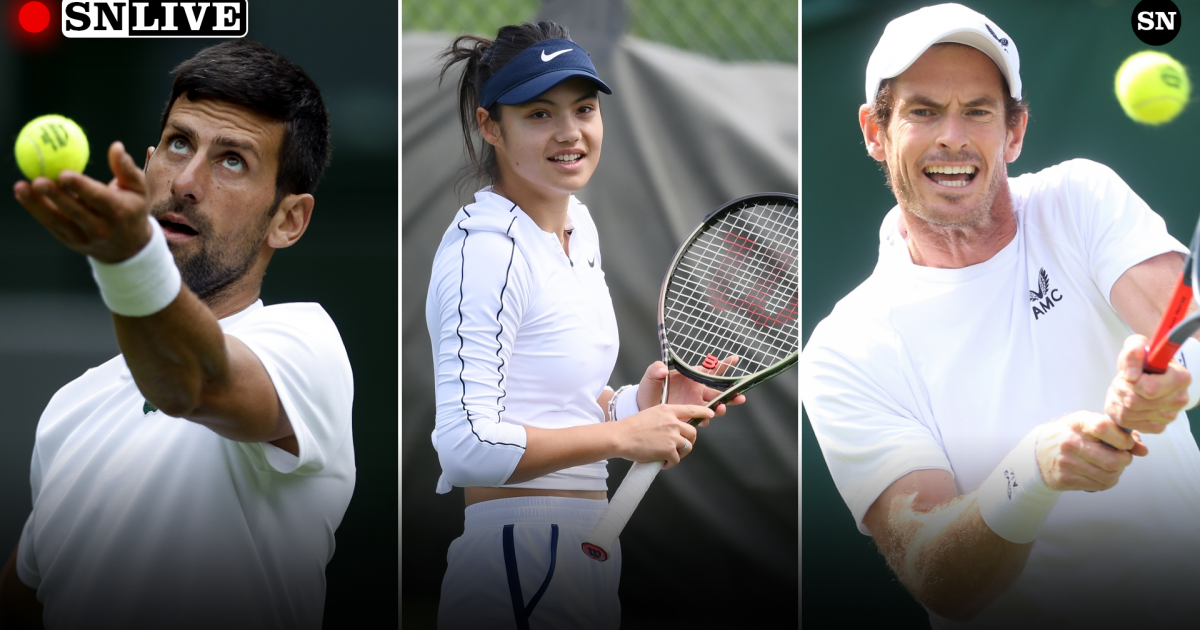 It’s day one of Wimbledon action in SW19 and spectators on Centre Court today are in for a real treat with Novak Djokovic, Emma Raducanu and Andy Murray all in action.

Play begins on the showpiece court at 1.30 p.m. BST/8.30 a.m. ET/10.30 p.m. AEST with defending champion Djokovic in action against South Korean Soon-woo Kwon as the top seed begins his quest for a fourth consecutive triumph at the grass-court Grand Slam.

British No.1 Raducanu makes her Centre Court debut after the Serbian’s match when she faces Belgium’s Alison Van Uytvanck in the first round hoping to put on a show for her adoring home fans.

Murray wraps up proceedings on Centre Court later this evening when the two-time Wimbledon champion takes on Australian James Duckworth.

The Sporting News is on hand to bring you live updates of all today’s matches on Centre Court below.

A 14th match ace starts the ball rolling for Djokovic.Two quick points hand the Serb three match points and he finishes up with a final ace down the middle to advance to the second round. That’s now a 17-0 record of first round matches at Wimbledon.

Djokovic can’t believe he’s missed a forehand into space to go 0-30 down.The South Korean has Djokovic on string going after a drop shot, which he makes, before he punishes him by sending a return into empty space. Djokovic then hits one beyond the base line and he’ll now serve for the match.

Full steam ahead for the Serb as an ace down the middle sends him 40-0 up and Kwon’s return on the next point can only find the net. One game away.

It’s been a while but Kwon has a smile back on his face as a neat drop shot pays off to go 40-15 up. Djokovic fails to return his next serve and it’s another game on the board for Kwon.

Djokovic is just starting to turn it up a notch now and is in a hurry to wrap this one up. At 40-0 he delivers a perfect overhead smash to move within two games of the second round.

Not quite the same level of ease for Kwon as he falls 0-40 behind. Djokovic apologies as his effort mid-rally hits the top of the net but he won’t mind too much as he gets an important break in the fourth set.

Djokovic gave Kwon absolutely nothing there. A perfect love-hold.

Djokovic has no answer to Kwon’s drop shot once again as he falls 0-40 behind. Another ace from Kwon hold the serve.

Turns out Kwon can also make things difficult for his opponent. A tidy forehand winner leaves Djokovic no chance and he’s got two break points. Djokovic saves both and then serves an ace to deny Kwon a third break point. A stunning lob over Kwon at the net sees Djokovic raise his fist in the air as Kwon’s drop shot on the next point doesn’t clear the net and the Serb holds.

Djokovic is making things difficult for Kwon right now but the South Korean’s over hit forehand presents the favourite with an early break point. Kwon remains patient and focused though with a winner at the net to hold.

That break of serve has lit the fire in Djokovic’s belly as he goes 30-0 up with one point coming from an ace. Three set points arrive and the top seed takes it at the second opportunity with an ace to win the third set.

The new balls are out and it has Djokovic flinging himself to his left to try and return Kwon’s shot but he can’t connect with the ball in the opening point. Errors from Kwon gives Djokovic two break points and the Serb duly obliges.

Kwon gives himself a talking to after a rush of blood to the head sees him try an ambitious forehand winner that goes well wide when he didn’t need to. Djokovic holds.

Kwon races to a 40-0 lead before gifting Djokovic a point after failing to react to a volley fired directly at him. Djokovic hits a forehand beyond the base line at the next point.

Kwon is still trying to catch Djokovic out with his drop shots, that have worked to good effect so far, but this one hits the net despite the Serb scrambling to his feet. Kwon has him where he wants him again to win a crucial point at 30-40. Djokovic then can’t believe he’s missed a forehand volley at the net to gift Kwon break point. Djkovic pulls off a few big serves and keeps his cool to hold though.

A rally of backhand slices goes Kwon’s way to go 30-15 up. A brilliant volley at the net from the South Korean follows before another forehand winner sees his coaching team rise to their feet. They loved that entire service game.

A magical shot from Djokovic at the net from a tight angle leaves Kwon no chance at 15-15. A ruthless serve and volley sees Djokovic hold.

This time a drop shot doesn’t come off for Kwon and he’s 0-30 down. Djokovic challenges a shot that’s called out, more out of frustration than anything after a long rally, but his effort was well wide of the line. Kwon is back in control as the Serb hits another easy forehand into the net and then gifts another point with a poor overhead smash.

Even Djokovic looks a little shocked that Kwon’s taken a set off him. He puffs out his cheeks as Kwon’s over hit forehand puts him 40-15 up. Kwon hits another unforced error and Djokovic is on the board in the third set.

After Djokovic takes the opening point in a crucial service game for Kwon there’s a brief stoppage due to an incident in the crowd again. Djokovic shakes his head after hitting his shot into the net at 0-30. Kwon then opens his body up to smash a forehand into the corner to level it up at 30-30 and another drop shot gives him set point. A massive serve forces Djokovic to return long and Kwon has the set! He fully deserves it.

Not often does Djokovic find himself serving to avoid dropping a set in the first round at Wimbledon but he is now. He races to a 40-0 lead though and smashes a forehand cross-court winner to put the pressure back on Kwon to take a set off him.

Djokovic is left doing the splits as Kwon gives him the eyes and fires a forehand winner to go 30-0 up. Kwon gets a huge round of applause for a sliced backhand drop shot winner, his fourth of the game.

Kwon is growing in confidence and it’s frustrating. An acrobatic effort only just fails to go over the net for Kwon at 15-30. Djokovic then shows his ruthlessness with a forehand beyond Kwon’s reach to go 40-30 up and then holds.

Kwon’s second double fault of the match puts him 0-30 down. Djokovic soon has three break points of his own. Kwon saves all three with some energetic points and an overhit forehand from Djokovic gives Kwon advantage. An ace from Kwon at the perfect moment sees him fight back to hold an important serve.

Brilliant decision-making by Kwon sees him earn three break points. Djokovic then hits an easy shot into the net and Kwon is the first to break in a set once again.

A few frustrations from Djokovic who hits a forehand long and then some brilliant reactions at the net from Kwon keeps him in the rally before Djokovic smashes one into the air and the South Korean holds.

Play was briefly paused due to a medical emergency in the crowd but after several minutes players are back off their chairs. It’s nice and easy for Djokovic as Kwon makes several unforced errors.

A delightful drop shot has Djokovic chasing shadows as Kwon goes 40-0 up at the start of the second set. He then tries the same shot again but Djokovic makes this one and pulls off a cheeky cross-court shot at the net of his own. A wild backhand from Djokovic gives Kwon the first game.

Djokovic’s own powerful serve is causing Kwon problems now as he moves to 40-15. Kwon’s forehand then goes down the middle but beyond the base line and Djokovic has the first set under his belt in 33 minutes.

Djokovic is now returning more serves than Kwon would like. A reckless forehand beyond the baseline gifts Djokovic another break point before another unforced error puts him one game from the first set.

Djokovic is just starting to find a bit of rhythm now and has Kwon doing all the running. A powerful backhand into the corner causes Kwon problems to go 40-0 up and he wraps up his service to love game with an easy shot at the net.

Kwon misses an easy forehand winner at 0-15 and again should do better the next shot after Djokovic came to the net. Djokovic gets his first break point after Kwon fires into the net and another unforced error sees the Serb level.

The world No.3 is looking a little rusty at present, he’s not played a competitive match since his quarter-final defeat to Rafael Nadal at Roland Garros on May 31, but he gets the job done with an ace to take the fifth 40-30.

Kwon rattles off another ace at the start of the fourth game before hitting the first drop shot of the match to go 30-0 up and then hits another ace. It’s clear his serve is going to be big for him today. Djokovic’s forehand goes beyond the baseline and it’s a 3-1 lead for the Kwon.

Wow. A ruthless forehand has Djokovic 40-15 down trying to avoid an early break. He then hits another ferocious forehand that leaves his opponent rooted and he has the break. That was not in the script for today!

Kwon fires an ace of his own to start his service game. Some further patient play from the South Korean puts him 40-30 up as Djokovic’s backhand goes long. At deuce, Djokovic fails to return an aggressive serve and doesn’t even attempt to reach the follow up. That’ll give the underdog some early confidence.

The first point goes to Kwon as Djokovic fires into the net but two strong serves from the Serb put him back in control. Kwon gets back to deuce after his opponent hits a forehand long but back to back aces gives Djokovic the first game.

1:35pm: Big cheers as the defending champion takes to the court through the new middle entrance under the Royal Box. The first Centre Court match of the 2022 Wimbledon Championships is about to begin!

1.30pm: We’ve already had play suspended on the outside courts due to rain but luckily Centre Court has a roof and so they’ll be no delay for Djokovic and Kwon who will be taking to the court any minute now. The sun is now starting to come out and a decision on the roof being open will be made after the first set.

1.10 pm: Hello, and welcome to today’s live coverage from Centre Court where The Sporting News is in place to bring you all the latest news from the opening matches. Up first is none other than defending champion and 20-time Grand Slam winner Djokovic. He is the favourite with the bookies for a reason and South Korean star Soon-woo Kwon is set to be in for a busy afternoon on the court.