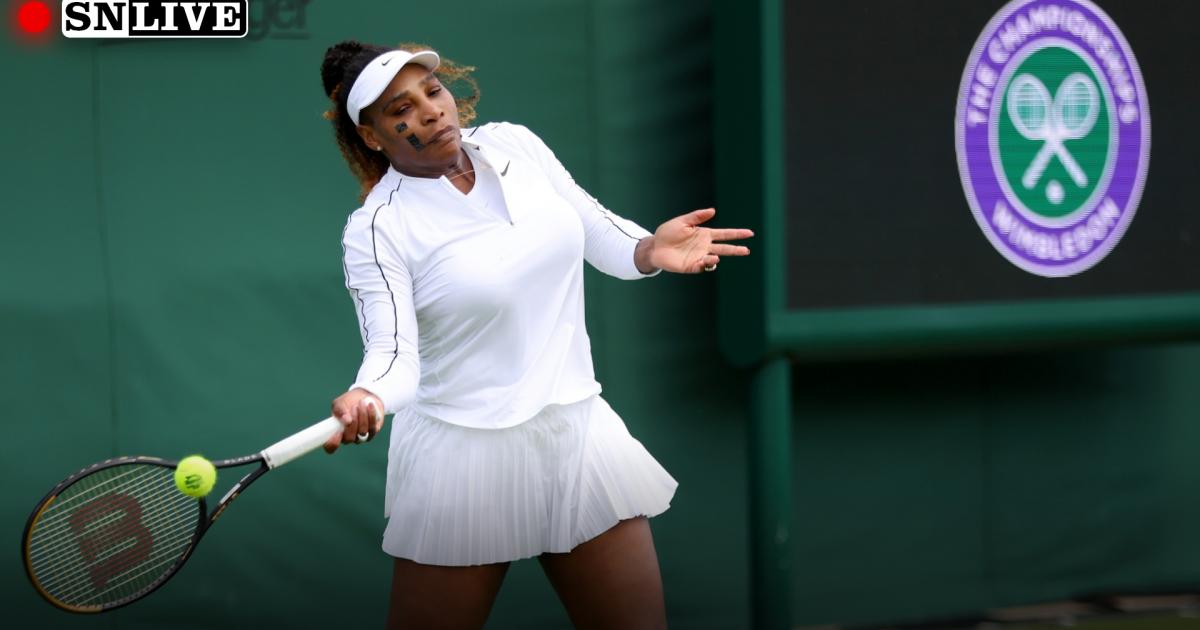 Serena Williams is back on grass. Nearly one year to the day when Williams was forced to retire from her first-round match at Wimbledon after tearing her hamstring, the seven-time champion is returning to the All England Club to take on France’s Harmony Tan.

Tan, 24, is one of France’s best young prospects. She is currently ranked just outside the top-100, but has just two main-draw wins at Grand Slam events and is playing Wimbledon for the first time. She’ll have her work cut out for her with Williams, perhaps the finest tennis player in history.

Williams is seeking her eighth title on the Wimbledon grass, a remarkable total. At 40 years old, Williams doesn’t have much more time at the top level. But, one way or another, the eyes of the tennis world will be drawn to her on Tuesday when she gets back on that iconic Wimbledon grass.

The Sporting News is tracking live updates from Williams and Tan’s first round match. Follow along below for updates and highlights from all of Tuesday’s action.

1:11 p.m. – Francisco Cerundolo and Rafael Nadal currently locked in an enthralling battle. Cerundolo just captured the third set, further delaying Williams’ return. Williams may have to restart her warmup given how long this match is taking.

11:45 a.m. – Ahead of Williams’ return to action, here’s a telling quote from Serena letting folks know her mindset entering Wimbledon.

Bryce Harper will require surgery to stabilize break. There is optimism he will play again this season after recovery of six weeks, give or take.

Check here for updates and highlights from the match as it gets underway.

How to watch Serena Williams vs Harmony Tan at Wimbledon

For U.S. viewers, ESPN will be handling broadcasting duties for Serena Williams’ Round 1 matchup with Harmony Tan. The match will also be live streamed on ESPN+ and Sling.

In Canada, TSN2 will carry the match, as well as TSN.ca and the TSN App.

What time does Serena Williams vs. Harmony Tan start?

Williams and Tan will likely take the court sometimes around 1:30 p.m. ET (3.30 a.m. AEST), although their actual start time depends on when the two earlier matches that take place at Centre Court finish.

Williams is one of the greatest players to ever pick up a racket and she has tended to prove as much at Wimbledon. Williams has hoisted the Venus Rosewater Dish seven times in her career, tied with Steffi Graf for the second-most all time among women’s players. Only Martina Navratilova has won the tournament more than Williams and Graf, capturing the trophy nine times.

Williams last won the tournament in 2016, defeating German Angelique Kerber in straight sets. It was her second straight Wimbledon title.

MORE: Who is the GOAT women’s tennis player?

The first round of Wimbledon wraps up on Tuesday, June 28. The tournament runs all the way until Sunday, July 10, when the men’s singles championship and women’s doubles final take place.

Here is the TV schedule for the remainder of the tournament.

Evil Season 3 Episode 10 Review: The Demon of the End
Canada vs. Switzerland final score, results: Canada advances to the 2022 World Juniors semifinals with win
10 Card Holders That Are Stylish, Minimal, and Functional
Marsai Martin’s Birthday Dress Has a Thigh-High Slit and Embellished Neckline
11 Chic Wedding Outfits For the Unconventional Bride