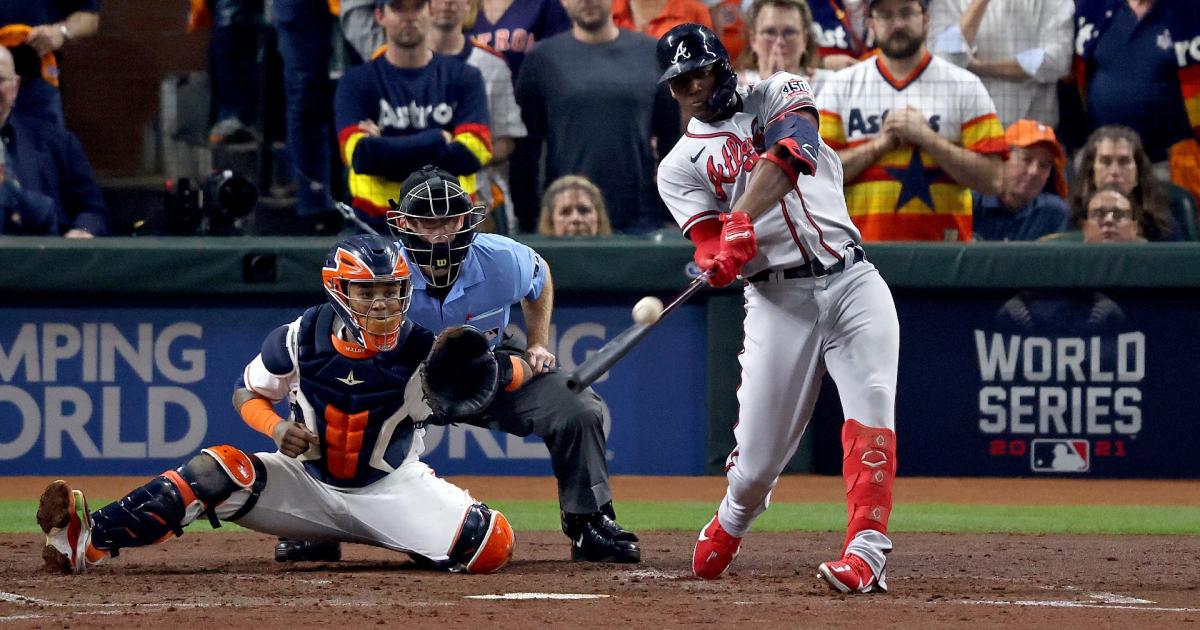 MORE: 21 reasons why Braves’ 2021 World Series title was so unexpected

But Soler caught me off guard. Yes, he was the 2021 World Series MVP and yes, he hit a baseball out of Minute Maid Park during the World Series, but his regular-season numbers were much more pedestrian than the other three, and those not on the nomination list.

I posted a screenshot of the list of nominees on Twitter. The first reaction, of course, was “wait, what?” But then, Braves Twitter found the list, and my timeline was filled with replies with one of these two things …

— “Well, only one of these guys has a World Series MVP.”
— A GIF/video of the iconic home run

One of these guys hit a ball to Saturn in the biggest game of the year.

The others did not. https://t.co/WzbkIwuGJD

but only one man silenced the entire city of Houston with a single swing https://t.co/0CDcYeLjPY pic.twitter.com/s7q3XZ4Y1y

And then, replies started to take a turn.

Like this, from @SKC_Evan: “Gonna stuff the box for Soler.” And this, from @connorshaw3: “We have to make a push for Soler. Have to.”

Thing is, that absolutely could happen. The ESPYs have had different ways of choosing winners over the years, but right now winners are determined solely by a fan vote. I double-checked. You can vote here.

Braves Twitter could swing the award to Soler, and it probably wouldn’t be that difficult. As far as I can tell, the final vote totals aren’t released, but it’s not like it’s a presidential election or even “America’s Got Talent.”

And the love between Soler and Braves fans is real. I asked Soler about it on Tuesday afternoon before his Marlins played the Cardinals.

“Since I made it to Atlanta, I always felt support from the fans,” he said, via Marlins translator Luis Dorante. “They always made me feel very comfortable there. The support was always great.”

And how great of a chance is this for Braves fans to say “Thank you” one more time?

It needs to happen. Soler isn’t a better player than Ohtani, Trout or Judge, but this is a fan vote.

It’s not an official on-the-field award. Soler delivered one of the most iconic home runs in World Series history, when he literally hit the ball out of the ballpark in Game 6, a three-run homer that gave Atlanta a 3-0 lead in the third inning. I was there, and I tried (but failed) to find the ball outside Minute Maid Ballpark.

If any one swing was ever worth an award like this, it’s that one.

So, yeah, make it happen, Braves fans. And Marlins fans. And, heck, Royals fans. After all, though his last half-season in Kansas City wasn’t great, he does hold the franchise’s single-season home run record, with the 48 he hit in 2019.

At the point, you’re probably wondering how Soler got the nod for the fourth spot. While we weren’t privy to the discussions, a source at ESPN told me a mix of ESPN editors, executives and show producers choose the nominees. The primary qualification, of course, was the World Series MVP nod.

Soler started all three games in Houston at DH and two of the three in Atlanta in right field. He didn’t start Game 4, but his pinch-hit home run in the seventh broke a 2-2 tie, and the Braves won 3-2 to take a 3-1 series lead. All told, Soler hit .300 in the Fall Classic, with three homers, six RBIs and four runs scored.

“There was a lot of emotions (in the World Series), just the competition we had, the adrenaline that was flowing, the whole team coming together to win ballgames,” Soler said. “Just having that, and thank goodness everything came together right and we won.”

So it’s not exactly established precedent for a player like Soler to automatically be there. But at this point, who cares? He hit this unforgettable home run, and now Braves fans have a chance to say “thank you” one more time, on a pretty darn big stage.