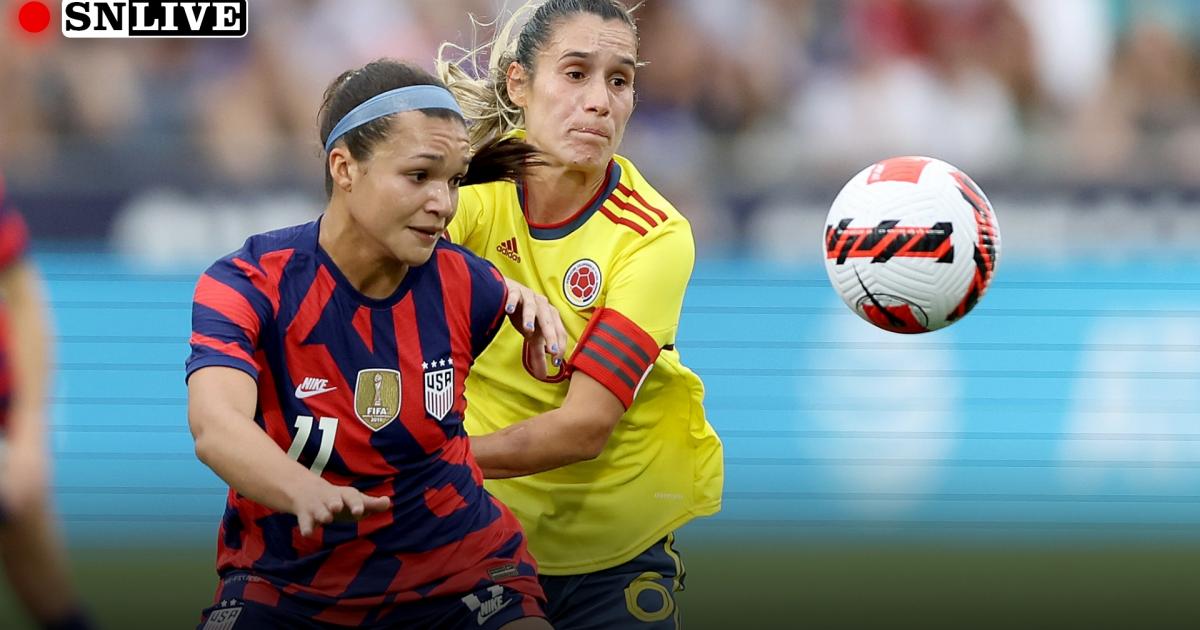 The world No. 1-ranked USWNT will be looking for a much-improved, goal-filled performance against No. 28 Colombia on Tuesday in its final tuneup for the all-important CONCACAF W Championship, which awards berths to the 2023 World Cup and 2024 Olympics.

The Americans beat the Colombians 3-0 in their first friendly on Saturday in Colorado, but they were also held to a frustrating 0-0 draw at halftime and generally struggled to break the visitors’ resistance. The USWNT will likely face similar defensive blocks at the W Championship (July 4-18) and will want to avoid similar missteps.

Sophia Smith continued her strong run of form with two goals and Taylor Kornieck capped the scoring with a last-minute header for the USA in Saturday’s match. Changes are expected at several positions as manager Vlatko Andonovski looks to spread the minutes.

The USA will begin W Championship play on July 4 vs. Haiti, then face Jamaica on July 7 and Mexico on July 11, knowing that a World Cup berth will be awaiting if it can finish top of its four-team group. The tournament winner will also clinch a ticket to the 2024 Summer Olympics in Paris.

DECOURCY: USWNT stock up, stock down vs. Colombia

62nd min.: USA SUBS — Mal Pugh in for Megan Rapinoe and Taylor Kornieck is on for Rose Lavelle. It was definitely an off-night for Lavelle.

60th min.: Yellow card for Rose Lavelle who chops down Linda Caicedo in midfield. More subs are coming for the USWNT which is actually suffering a bit over the last 10 minutes or so.

57th min.: Big defensive play by Emily Sonnett in her own box! She has to clear a ball for a corner that was destined for Leicy Santos. Nothing comes of the corner.

55th min.: What a chance for Colombia! USA ‘keeper Alyssa Naeher with the big diving save! That was heading into the far corner by Leicy Santos.

54th min.: Rodman is the catalyst for another dangerous USWNT chance. Her cross into the box finds Washington Spirit teammate Ashley Sanchez, but she can’t get a clean shot off.

47th min.: USA chance! Trinity Rodman already with an impact, taking players on down the right, and her cross was flicked by Rapinoe toward goal but it’s cleared off the line by Colombia.

Looking for a second…@mPinoe‘s header is cleared off the goal line! pic.twitter.com/CkMmQpQDiI

46th min.: SUBS USA — Kristie Mewis and Trinity Rodman are in the game for Lindsey Horan and Midge Purce. Linda Caicedo comes in for Elexa Bahr at forward.

Halftime: This first half felt similar to Saturday’s match as far as the rhythm for the USWNT: slow, little creativity and not enough interchanges and passing combinations. It was all USWNT, but it wasn’t entirely convincing, and Colombia were also a bit more serious about attacking in this one.

The bright spots for the USA: Midge Purce was active and willing on the right wing for the USA, and Sofia Huerta was aggressive down that same flank (and her crossing game was strong), but the midfield has come up short.

Ashley Sanchez has only shown flashes, Rose Lavelle has been invisible, Lindsey Horan has only had a couple of long-distance shots, and Megan Rapinoe has not made an impact (with a few poor set piece deliveries to boot). Changes seem necessary to inject some more life, pace, and belief into the attack.

5 – The @USWNT has benefited from 5 own goals in 2022, the most in a calendar year in program history. Gifts. pic.twitter.com/E5JQUuV3wj

45th min.: USA hit the crossbar! Sofia Huerta strips the ball from a Colombian defender and whips in a cross. Alex Morgan with the acrobatic touch and sends the ball off the bar.

37th min.: Purce with the curler from distance barely misses the target! That would’ve been a candidate for goal of the season. Emily Sonnett stepped up from center back to intercept a Colombian pass and she fed Purce on that one.

32nd min.: USA chance! Great cross by Carson Pickett from the left side, but Midge Purce can’t head the ball on target. She was just under the ball couldn’t direct the service.

30th min.: USWNT goalkeeper Alyssa Naeher comes off her line and Colombia’s Diana Ospina attempts a shot from distance at the vacated net from 35 yards, but she misses the target.

28th min.: Lindsey Horan may be playing at the “No. 6”, but she’s pushing up into the attack and fires a shot from just outside the box, but the Colombian ‘keeper saves it.

22nd min.: Goal USA! A cross by right back Sofia Huerta is deflected by Colombia defender Manuela Vanegas into her own net. There wasn’t a U.S. player within five feet of that cross. The Americans get the lucky break they didn’t have in the last game.

An own goal from Colombia puts the #USWNT in front‼️ pic.twitter.com/Zo3PPc4ZUM

20th min.: It’s feeling like the first half against Colombia on Saturday. Slow, uninspired, few combinations or interchanging runs around the box. The USWNT have looked best when Ashley Sanchez and Midge Purce are making quick passes and runs into the box.

18th min.: Alex Morgan goes down in the box and it was an identical play to the penalty she earned in the first match. A defender just clatters into her back as a cross was coming in. That should’ve been called, but the referee doesn’t point to the spot.

8th min.: After an energetic start, the USWNT is settling into a slower rhythm and Colombia doesn’t mind as the visitors dig in defensively.

2 minutes from kickoff: Vlatko Andonovski explained some of his lineup selections to ESPN prior to kickoff and here’s why Lindsey Horan will be playing the No. 6 deep central midfield role.

Vlatko Andonovski to ESPN just now about Lindsey Horan playing a deeper role tonight: “There will be at least one time where we’re going to see her in that role in [World Cup qualifying].” #USWNT

5 minutes from kickoff: You won’t see the anthems on ESPN, but you can watch them here:

National anthems in the shadow of the Wasatch Range:#USAvCOL #USWNT pic.twitter.com/E5k1By8USV

15 minutes from kickoff: Megan Rapinoe and Alex Morgan in the starting lineup. It’s happened a few times before in their career:

“Morgan and Rapinoe enter the match having made more combined appearances for the #USWNT (379) than the other nine players in this starting lineup combined (363).”

Two hours from kickoff: The USWNT has won all six matches it has played in the state of Utah.

No snow angels in the forecast tonight, but all we’ve got is good memories here in Utah! ⛄️

USWNT manager Vlatko Andonovski made nine changes from the team that beat Colombia on Saturday. Defender Carson Pickett earns her first-ever cap and No. 1 NWSL draft pick Naomi Girma gets her second cap.

NWSL top scorer Alex Morgan gets the start at center forward with ex-BYU scorer Ashley Hatch, who struggled in the last match, perhaps having a chance to come in with less pressure in the second half in front of her former home crowd.

MORE: How long might Catarina Macario’s injury keep her out?

Colombia hasn’t played a competitive match in years, with the last one taking place in the 2019 Pan American Games. It has played five friendlies so far this year with four draws and Saturday’s 3-0 loss to the USA.

The South American nation is preparing to host the Copa America Femenina (July 8-30) and will hope to come away with some positives from Tuesday’s match, namely, can manager Nelson Abadia’s team find a way to keep the Americans scoreless at the half for a second straight match?

The starting lineup looks to maintain the five-defender shape with a single change in each sector of the field from the last match: at defender (Viviana Acosta), in midfield (Diana Ospina) and at forward (Elexa Bahr). They’ll still need another big match from goalkeeper Catalina Perez.

MORE: Why the USWNT struggled against Colombia in Colorado

The match from Rio Tinto Stadium in Sandy, Utah, will kick off at 10 p.m. ET (8 p.m. MT) and will be televised in the United States on ESPN, which can also be streamed on fuboTV, which offers a free trial.